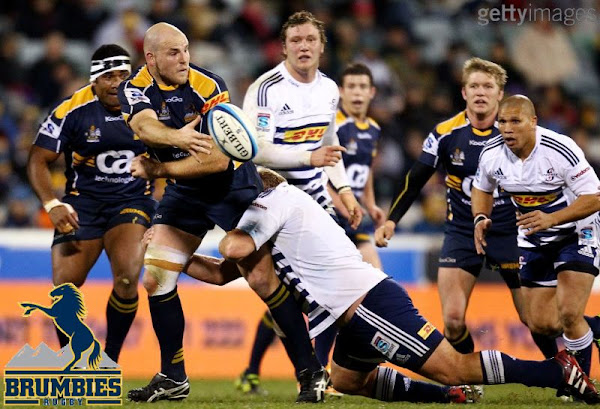 It was a game Matt Giteau felt too poorly to be involved in. Foxsports couldn’t be bothered posting video.

The Brumbies have posted a lengthy match report.

Skipper Matt Giteau was ruled out on Saturday morning with an infected tooth, leaving Stephen Moore to lead the side.

Moore was once again brilliant, earning the man of the match and Charles Anderson medal – an award given annually to the best on field in the Stormers v Brumbies fixture.

But despite his never-say-die attitude – which at one stage forced the Stormers to withstand thirty phases on their own line – the ACT team could not deliver the killer blow.

As the only grown up Brumby who appears to give a damn RiotACT votes wholeheartedly for Moore to be captain next year.

There’s no way there would only be 2k at a Brumbies game. No way, no how. No matter how bad they get!

It was an entertaining game, relatively speaking.

To jb,
the announcer on one of the few occasions he braved the microphone gave the crowd figure of 2311.

2311? That is weak as piss given that the club supposedly has 9000 members. Canberrans are fickle as they come, happy to get behind winning teams but nowhere to be found when their support is most needed.

I feel sorry for guys like Stephen Moore and some of the young blokes the Brumbies have running around who don’t have much first-grade experience. Every loss played in front of a nearly empty stadium must really sap their confidence.

Interesting, they claimed 10,300. Which could be misheard?

To jb,
the announcer on one of the few occasions he braved the microphone gave the crowd figure of 2311.

2000 spectators. How much money do the ACT residents provide to the Brumbies? Could this money be spent in better ways on sport in the ACT?

2000 spectators. How much money do the ACT residents provide to the Brumbies? Could this money be spent in better ways on sport in the ACT?

Last Saturday night was a disgrace, and an embarrassment to all the visiting spectators. I’m not even talking about the Brumbies who apart from one 30+ phase play(with no result), kicked the ball on every occasion.
What was the story with the big screen? Do they only plug it in if there are more than 10,000 people there? And the announcer was notable for his absence. We only heard about half of the replcements and the usual comments to the crowd to get behind the team were few and far between.
As the weather gets colder the Brumbies (players and Admin) need to realise that we are not going to continually fork over hard earned money for poor service.
I think the players did try hard and we have been hit hard with injuries but this was a game we could have won. As someone else mentioned it doesn’t help when one of our props continues to believe he is a back and doesn’t need to get involved in the rucks and mauls but rather sit out on the wing waiting to stuff up planned backline moves.
I was pleasantly surprised last month when i was up in Brisbane and watched the Reds play that after the game all the players went to the sideline to talk to the devoted fans. On saturday night the only Brumbies player to face the fans was Pat McCabe. All the rest stood in a huddle in the middle until the children lining the sidelines, waiting for their chance to get an autograph or at least shake hands with one of their local heroes had been dragged away by disgruntled parents. That doesn’t send the right message to the potential Brumbies members of the future. Maybe they were scared they would get abused, but what they nedd to realise is that those of us still their are the die hard fans who just want some recognitions for our support.
On a final note, the only commentry we heard on Saturday was between a Group of teenagers sitting behind us swearing at another group on the concourse. Bad enough but the security standing nearby did nothing.

Reds in Lang Park next week, I think the Brumbies will be slaughtered.

Besides a certain prop still thinking he is a back I thought they had a go. Not good enough by a long stretch but they had a go. As a member I can go and support and watch a side that does their best, even though it can be a chore at times.

And as the above posts said, the banter and the one liners are the entertainment.

The atmosphere is the only thing left to go for. I’ve heard some of the best calls of the season at the last two games.

The crowd was much more entertaining last night. It’s very much the diehards left now who are well and truly resigned to the fact that we suck and have decided to at least find humour in the situation.

There was some great banter in our bay with a bunch of Yarpie supporters, telling them they should be ashamed for only winning by 13.

Lorraine White - 3 hours ago
Really good food and such great people. Love it. View
Kathleen Brooks - 6 hours ago
Juha Turunen this is what I was talking about. View
Fiona Mutton - 6 hours ago
Such a great cafe , always friendly and some of the best food in the region, whenever I am driving through from Braidwood thi... View
News 23

Margaret Freemantle - 4 hours ago
Tegan Martin not sure what the answer is. Somehow, there has to be some pride instilled - perhaps well kept places get reduce... View
May Mac - 4 hours ago
Is the government competing with everyone else to book tradies in to do work? Why don't they have their own, like they used t... View
Tegan Martin - 4 hours ago
The other worst part is that even if they manage to remove them, they'll have no choice but to give them another house, which... View
Opinion 50

bd84 - 5 hours ago
There’s always many “what about...” for things that people think are worthy. The budget isn’t a bottomless pit and th... View
HiddenDragon - 6 hours ago
"Whether the Coalition has traded in the debt truck or just parked it out of sight until needed remains to be seen." That par... View
Trevor Hicks - 8 hours ago
Jason Duarte Thanks to the ACT government... View
Opinion 94