Foxsports have the news that the new era Brumbies have squeaked out a win against the Western Force at home by a razor sharp two point margin.

Of the two sides the Brumbies showed more vision in attack, and a great deal of guts defending in the second half.

But Nic White’s goal kicking was atrocious and at times some poor option taking let the Force back into proceedings.

As a platform on which to build it has a lot of promise. Fortunately we have a bye to iron out the kinks.

On the bright side, while we got banjoed at the breakdown we won’t be playing against David Pocock every day. 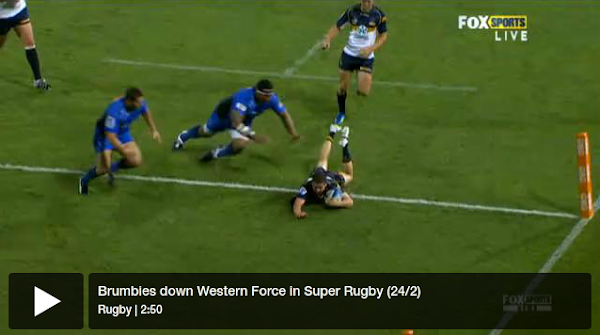 14 Responses to Brumbies edge out the Force 19 v. 17
Filter
Showing only Website comments

If you reduce the amount of points for penalties you attract more penalties.

When the punishment for infringing is lowered players will simply infringe more.

The points system is perfectly fine, but referees need to use cards more for repeated and cynical offences.

Australians are the only people who call for these kinds of changes because unfortunately we are the only country in the world where rugby league is the more dominant code.

The rest of the world has no issue with this multi faceted game.

More tries does not equal a greater spectacle. There was a Chiefs v Lions match a couple of years ago that displayed this.

There are a significant amount in the current Brumbies squad, other Super rugby teams, and plying their trade overseas.

The Brumbies also have a heavy ACT representation in their coaching staff.

You will find that there is currently (and historically) significantly more ACT players plying their trade locally and abroad than there are players from Melbourne or Perth, which are the two other (and much larger) Australian Super rugby provinces.

I approve of the use of “quince” as an insult.

haha, it was funny watching all these people running around with Chiko rolls because that’s all they had. I haven’t seen anyone eat a Chiko roll since 1982.

apart from the 50 people long beer lines it was a good night out.

And they ran out of synthetic meat fingers before half time!

AFL people are so insecure, NRL is clearly more popular check the tv ratings some time.

That said the NRL U/20’s outrates the super rugby on fox.

I didn’t mind the Brumbies game, it was very important they win that game and apart from the 50 people long beer lines it was a good night out.

How many of the current Brumbies were even born in the ACT?

I don’t think it matters where they’re born – in modern society why should your parent’s location dictate your allegiance? What does matter is that JW has made sure all the players are aligned with clubs in the John I Dent cup, so they’re all Canberra based, and tied to the Canberra community and not “FIFO” workers. Agree with you about the penalties needing a change – mandatory Scrum/Lineout 5m inside the attacking 22 maybe, and a dropped kick outside?

When the administrators of rugby union change the worth of a penalty goal to 2 points and a field goal to 1 point I will consider starting to be a follower again. I believe one super rugby team won last week by kicking 6 penalty goals while the defeated team scored at least one try. This is ridiculous.
When a field goal was worth 2 points in rugby league and specialist kickers like Eric Simms (the greatest) sometimes single handedly won matches, the administrators realised this was degrading the game so they changed the value of a field goal to 1 point. The “modern” rugby union game has been stuffed because it has become so predictable, boring and all about money. How many of the current Brumbies were even born in the ACT?

The Brumbies home crowd would have to be the one of the most fickle, boring, unappreciative sporting crowds in the country. Even when we had one of the greatest provincial rugby sides ever assembled, you’d be forgiven if you thought you were attending a large outdoor library, instead of a rugby game.

Considering how many changes we’ve had during the off season, as well as all the debant’s on display, I was very happy with the opening round performance and win.

AFL fans are such defensive sooks. More popular than Rugby? The game that’s played in dozens of countries around the world and has a genuine world cup every 4 years? The game that runs a very successful three nation comp every year?

If you love the code, that’s fine. Just don’t come out with stupid claims. Just makes you look a bit silly.

So the Brumbies reckon all that matters is winning. Then why am i paying to watch? Why don’t I just look up the scores? They’ll be playing in front of their friends and family only soon with an attitude like that.

After seeing the Brumbies win, nothing makes me happier than seeing Ashley-Cooper’s face when the Reds scored after the siren. Hope your girlfriend is enjoying Sydney, Adam!

The in-play kicking was very ordinary. Honestly, bombing the ball in the Brumbies own half?! When the pressure was on, they made mostly good decisions on where to kick; when they had time to think about it, the result was a kick pretty much straight to the arms of an opponent.

Vindalu - 4 hours ago
I doubt very much whether he is homeless... View
News 14

Sam Walker - 6 hours ago
Sean, we need to be smarter than that. People getting pissed off about the SFFP preferences are failing to understand that yo... View
Property 16

Sandra Wormald - 7 hours ago
Oh, so that is where the money from the tax payers went, which was meant for bush fire and flood relief ..... View
Business 17

Acton - 8 hours ago
A local paper that has a rabidly biased weekly column from a once amusing but now worn out journalist who intentionally and r... View
Tom Adam - 17 hours ago
*Riot-Act Rubs Hands *Canberra cries at the loss of the last printed journalism available as all other magazines and newslett... View
HiddenDragon - 19 hours ago
"If the printing presses are mothballed, the rationale for maintaining a large commercial building in a central location woul... View
News 3

George Watling - 18 hours ago
Will Andrew Barr's relentless war with nature never stop. 40,000 trees have been cut down and dozens of our green spaces have... View
News 44

Maria Greene - 20 hours ago
Frank Valzano yeah but how would Brendan or pollies benefit? View
Frank Valzano - 21 hours ago
Use the money to provide mental health support for current and former soldiers suffering from PTSD.😡 View
Lifestyle 2

Liz Widdicombe - 21 hours ago
If these guys were on during the week I would go back to listening to 104.7 for sure. View
show more show less
*Results are based on activity within last 7 days

What do you do with a government agency that stays in the news for all the wrong reasons? Spend $100,000...
Community 35

@The_RiotACT @The_RiotACT
Googong has unveiled a new seven-metre high sculpture at the township's entrance. It's designed to welcome visitors to the booming area and celebrate the region's ecology and geology https://t.co/AWpPLqKNnk (59 minutes ago)

@The_RiotACT @The_RiotACT
Tidbinbilla's koalas were saved from the Orroral Valley Fire and floods, and after a stay at the ANU are now returning home. But the family of five is welcoming some very new arrivals https://t.co/8xlL2tHGgR (2 hours ago)

@The_RiotACT @The_RiotACT
It looks like we're in for a wet and windy week, whether you're in the Territory or on the coast, with a cold air mass with at least two low-pressure systems crossing the Great Australian Bight https://t.co/TVAirJEcEO (3 hours ago)