Brumbies turn in a blinder in Melbourne

A brutal, thumping, dominating, effort by the Brumbies in Melbourne obliterated the Rebels tonight.

Foxsports has the story:

The Rebels led 13-12 at halftime but they were starved of ball in the second stanza and injuries to their attacking maestros James O’Connor and Kurtley Beale cruelled their chances as the Brumbies piled on 18 unanswered points.

It’s their sixth consecutive win away from home. 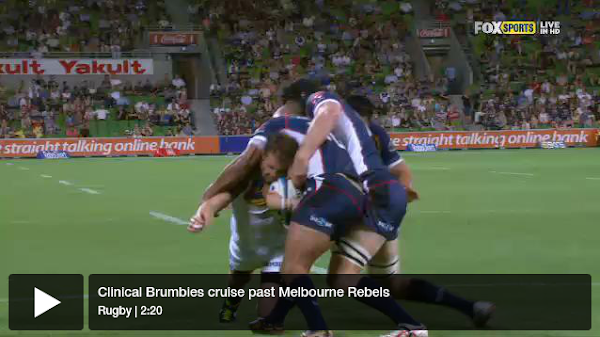 Very early in the season going by what last season taught us.

I believe Mowen is peaking as he has found the happy medium between bulk and natural weight giving him optimum strength and agility/speed.

Looking promising with a long way to go.

and how isn’t Mowen in contention for the Wallabies side?

Great performance. 0 points against in 2nd halves so far this season. How good is it to have the best coach in the world coaching our team… Let’s just hope we can hold on to him for a while longer.

Liam Grimshaw - 13 minutes ago
I’m vegan View
Buddy Edwards - 1 hour ago
Dean Newman you have given me a migraine reading your words. View
Frances Jane - 7 hours ago
Dan Backhouse I'm virtually vegetarian, and have been vegan at times, but found the article to be outdated. Perhaps it's the... View
Business 11

Pauline Clynch - 25 minutes ago
Well done Beachy! ~ PC 👍 View
Cleon Furlong - 26 minutes ago
Excellent choice!! when she left Industry she was very much missed. Always remembered me when l delivered her mail View
Giuseppina Sciulli - 13 hours ago
Yes I worked in one of her Divisions long time ago. She listened to what non ses had as advice as well. That’s a real manag... View
Breaking 1

jwinston - 3 hours ago
Let them go because they are under 14 and don’t know what they’re doing. View
News 32

Elysha Fordham-Young - 19 hours ago
Where is the Waramanga one please? I can't find it. View
show more show less
*Results are based on activity within last 7 days

We're all in this together. That's been the mantra for 2020 - the year that's brought almost every catastrophe to...
Breaking 1

We're all in this together. That's been the mantra for 2020 - the year that's brought almost every catastrophe to...
News 32

@The_RiotACT @The_RiotACT
Public Service staff numbers, the use of contractors and digital transformation will be examined by a new Senate committee inquiry https://t.co/POkqqwyQqv (1 hour ago)

@The_RiotACT @The_RiotACT
A COVID-safe Enlighten is going ahead but the event may not include the popular Night Noodle Markets https://t.co/JxdNhBvZO8 (2 hours ago)

@The_RiotACT @The_RiotACT
ACT Government will stick with the current watchdog as it moves to Stage 2 of its reforms to stamp out dodgy builders and protect consumers https://t.co/yv0iOiOJEw (3 hours ago)