Brumbies win ugly. 24 to 6 over the Queensland Reds 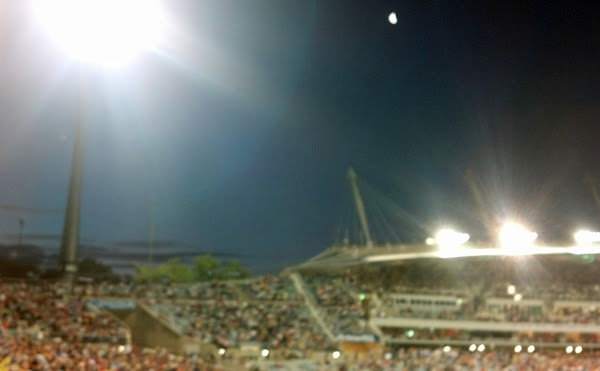 It was not champagne rugby in Bruce last night. But it was a win over the mighty Reds.

RugbyHeaven have an honest assessment from the Brumbies skipper:

“We’re happy – a win’s important at this stage and they outplayed us twice last year and we weren’t happy with that,” Brumbies captain Ben Mowen said. ”We’re happy with that as a base. That’s OK for a base, but for where we want to go, that’s not good enough.”

The crowd we hear was officially 17,000, but with large bays empty we suspect dark arts were applied to those numbers. A solid 15,000+ for sure.

Foxsports have the highlights:

3 Responses to Brumbies win ugly. 24 to 6 over the Queensland Reds
Filter
Showing only Website comments

JB, I do think you’re a little harsh on the Brumbies from time to time. The only part of their game that stood out for me as needing work was their set kicking. It was great to see the ball being run, particularly when it was being run past QC 🙂

Another highlight for the evening was the refereeing. The game flowed well, and the only stoppages were for fairly obvious penalties.

johnboy was a man on the move on Saturday night. Happened to spot him a few times in the inner bowl area of the Gregan – Larkham stand & also sitting a few rows down from me, in bay 75 during the second half.

Wasn’t the greatest spectacle but we got the win over a rival & likely, our biggest threat in the Australian conference.

Was very skeptical on the 17,000 crowd figure. Looked a lot closer to 15,000 – 14,500. Perhaps the same people who come up with the crowd numbers for Sky Fire every year are also in charge of counting the numbers at Canberra Stadium

Twas a good first game – and result overall!
They ran the ball more than I thought they would which was great to see! Though, kicking was below par – and should have been for touch a few more times instead of for an attempted penalty goal. Defense from both teams was quite solid, with quite a bit of niggle!
Anyway, a good night out. Much nicer sitting there last night than in mid winter! 🙂

P.S. Your top pic looks like you’d had a few refreshments before snapping! Hahaha!

Shaun Cummins - 25 minutes ago
And which body is going to be the first experiment? A Frankenstein Monster. View
Despina Despina - 2 hours ago
What a waste of money. Give it to me instead!!!... View
Francois Janse van Rensburg - 2 hours ago
I'll do it for $50 000 !!!! View
Opinion 181

Rowan Hartcher - 4 hours ago
Alan Hopkins like wise View
Peter Quinn - 5 hours ago
So when can we celebrate colonisation????. Whatever day is nominated it will always be contested View
Alan Hopkins - 5 hours ago
its not that hard to change the day. just do it... View
Opinion 24

Bradley Heanes - 7 hours ago
Didn't the defence department already appologise for this? (Even though they were assisting the RFS at the time) Didn't they... View
franky22 - 10 hours ago
Why can't the ADF simply state that they made a mistake. View
News 21

Magpie Allan - 12 hours ago
Undoubtedly the two icons are among two of the greatest men you’ll could ever meet.... View
Breaking 5

Tramcar Trev - 13 hours ago
Simple do what other regions do, use local volunteers to staff the visitor centre. View
show more show less
*Results are based on activity within last 7 days

A toxic outbreak of bacteria and blue-green algae has closed many of Canberra's waterways and lakes, due in part to...
Community 10

@The_RiotACT @The_RiotACT
This week’s newsletter covers everything from a sumptuous Lebanese breakfast spread to algae in Canberra’s waterways to lively discussion around Australia Day https://t.co/hyR7zinwv6 (1 hour ago)

@The_RiotACT @The_RiotACT
Red & purple are the new black according to a group called the Red Hatters who provide encouragement + empowerment to women in Canberra https://t.co/nuHKJ26rGA (3 hours ago)

@The_RiotACT @The_RiotACT
Can you see yourself relaxing on the deck of this lovely Lilli Pilli home? The stunning elevated property offers the perfect opportunity to kick back & enjoy life https://t.co/exzSAWdrIG (4 hours ago)