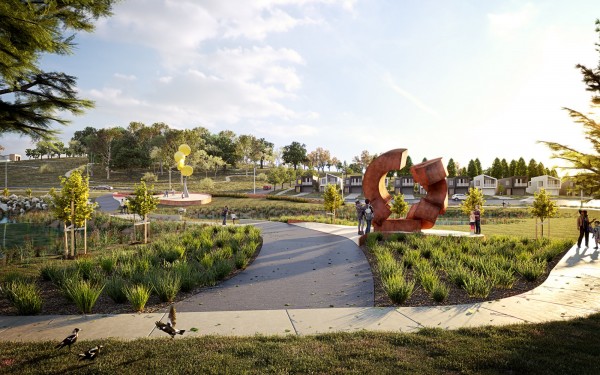 All six packages of land in Denman Prospect up for grabs at a builders’ auction today sold, five under the hammer and the sixth immediately after the auction, for a total of $15.94 million.

The Molonglo suburb is the first residential project to be developed by the team behind Canberra Airport.

A separate public auction for standard residential sites will be held at 10am tomorrow for five blocks in the prestigious Denman Ridge precinct and another 25 sites within the elevated areas of ‘Mountain View’ and ‘Denman Heights’.

Nine reasons to get in early at Denman Prospect

Nick McDonald Crowley, the director of project delivery for Denman Prospect, said three townhouse sites were sold for $10.23 million, representing a price of $807 per square metre.

“There was spirited bidding with 21 registered bidders. Five of the sites fell under the hammer, and the sixth was sold immediately after the conclusion of the auction”.

Mr McDonald Crowley said the land would be ready for construction in early to mid 2018.

“Today’s auction confirmed the market’s confidence in the Molonglo Valley, and particularly Denman Prospect,” he said.

“The infrastructure at Denman Prospect, including the completion of most roads and services, the development of ponds, lakes and parks, and recently opened schools in the adjoining suburb of Coombs, has proved a major drawcard for builders and individual purchasers of the 377 sites,” Mr McDonald Crowley said.

“Already, over 270 standard residential blocks have been sold and the first residents are due to move in before the end of the year.”

Zakzook Chico - 7 hours ago
Patrick J Pentony couldn’t agree more View
William Coats - 8 hours ago
So after 20 years this Labor Greens Government is ready to promise action. I guess we will have to wait and see. View
Patrick J Pentony - 8 hours ago
Rheyce Spears we are at the start of the twentieth year of labor greens gov in the ACT. Not sure you can really blame anyone... View
Opinion 3