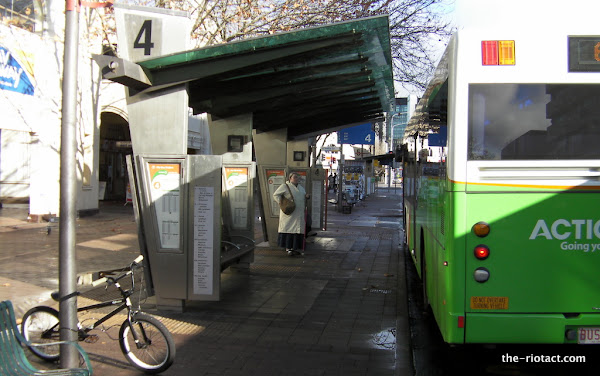 Simon Corbell has announced that the long awaited real time bus timetabling system is coming… in 2013.

Development of a real-time passenger information system, that will provide the travelling public with instant timetable information for ACTION bus services is underway, Minister for Territory and Municipal Services, Simon Corbell, announced today.

Mr Corbell said the system will provide the community with instant information via the internet, mobile phones, touch screen displays and on bus visual displays.

“The ACT government remains committed to improving the delivery of public transport services to the Canberra community,” Mr Corbell said.

“The Government has allocated $12.5 million in last year’s budget, over the next three years, to allow for the design and roll out of a real time passenger information system for use on ACTION buses in Canberra.

KEMA Pty Ltd have been engaged to do the work.

I wonder how much it would have cost to have just bought TramTracker (and adapted), or simply released the data in open source and let some bright developers compete to make the best app (rather than whatever staid app ACTION are likely to come out with).

Sounds a bit like the way Revolve – a local, not for profit charity – was kicked out of Mugga Lane tip and replaced by shady Gold Coast outfit Aussie Junk (what an appropriate name!) which promptly went broke within a year. When bureaucratic pride rears its ugly head, no amount of rationality or commonsense will counter it.

Madness! Where do I find the requests for tender on these things?

The contract is there but the RFT isn’t. According to http://www.onbid.org/bids/ICT-Consultancy-Real-Time-Passenger.sq6019611.htm it closed last December.

This is ridiculous! The IT, infrastructure and maintenance should have been spec’d and tendered for separately. And then there are those who were offerring to do some of this work for free if they could just get the data.

Madness! Where do I find the requests for tender on these things? The ANU MyBus solution has been mentioned. Our lab is booked out with US jobs at the moment but would like to submit for work like this in the future to have a local client base. 6 figures not 8 figures surely. The government is incompetent for getting it wrong by orders of magnitude. Who are their technical advisors?

‘Crimes’ update from the MyBus Imagine team:
http://www.canberratimes.com.au/news/local/news/general/students-offered-bus-tracking-months-ago/2215353.aspx
I seriously wonder what other deperately needed projects could be ticked off the Govt list with the better part of this $12m….? Meanwhile, rego et al went up on 1 July…..

The systems really are useful, the ones in europe for buses, trams etc are great. Thing is i’m guessing we’ll only get LCD displays at interchanges… Still would be great if they fixed the main reason nobody catches the buses and that is how long it takes to get from A to B.

It does seem extremely unfortunate that a faster method to something usable – even as a stop-gap -can’t/won’t be used due to ‘politics’ or typical PS bureaucracy dithering…. 🙁
Especially as it would cost taxpayers less! Sigh…

Is ACTION able to be hit with an FoI request for current (static) route, stop and timetable information in machine readable format?

… or they could just finish the Google Transit integration that was first announced to go live in _June 2009_:
http://google-au.blogspot.com/2009/06/google-australia-opens-doors-to-our-new.html
“public transit information for […] Canberra’s bus network (ACTION buses) will be available in Google Maps later in June”

To achieve that, all ACTION needs to do is give accurate timetable data to Google in a standard format. Then it would “just work” with most smartphones (including iPhone), and with Google Maps in regular web browsers.

One has to ask: If ACTION doesn’t have accurate computer-readable _static_ timetable & stop location data in 2009 or in 2011, what are the realistic chances of having accurate dynamic realtime data in 2013? You have to walk before you can run.

I know it would only really help the younger demographic, but can’t they just slap up an iPhone app in the medium term? One similar to the fantastic TramTracker in use in Melbourne would be great.

John Mair - 4 minutes ago
I was there and celebrated that night. The VFL Pres. Allen Alyett declared that they would never have multi Rep teams again.... View
Guy Hosking - 19 hours ago
I was there. Cowboy Neale was too big for Francis Bourke. The ACT kicked straighter than the VFL. View
News 51

Russell Nankervis - 41 minutes ago
Have you tried to lobby them to do something or are you only complaining because it is an election? View
Breaking 30

Lynn Stape - 45 minutes ago
well this went from bad to worse and very quickly didnt it...four now, unless they have gotten another one in the last few ho... View
O L - 8 hours ago
I’d be more worried about the eight inbound commercial passenger flights arriving in Canberra today. Who is so important th... View
Angie Fearon - 10 hours ago
Steven citation requured. Also, what is the cost for every life lost? A family in mourning & an associated economic effect.... View
News 5

Lynn Stape - 47 minutes ago
I am very pleased we chose not to live in the general area of this... good luck to those who live anywhere close to this. View
Trish Roberts - 1 hour ago
I thought this was refused?... View
Marea Fatseas - 8 hours ago
Ricky Toms it makes no sense to transfer all the waste currently going to Hume where it’s all set up for waste management a... View
News 1

alistaair - 1 hour ago
Labor deciding to accept victory and accept the preference votes from the Shooters, Fishers and Farmers party would imply or... View
News 32

Tara Jameson - 7 hours ago
A lot of these have over-wide staircases, I expect so that a stair lift can easily be installed. View
Kerry Jackson - 8 hours ago
Pity there are no single storey for downsizers. No one wants stairs as they get older. So little being built like that. View
Opinion 24

Spiral - 9 hours ago
ACT Labor has been in power so long that problems like this are their fault, aided by the Greens who have helped them keep po... View
Acton - 10 hours ago
This is a problem of your own making. The Labor/Greens ACT government have intentionally restricted land supply. Result: high... View
News 12

Jody Maree Harrison - 12 hours ago
Do the right thing please don’t be dooooshhhhhhhkos Think about others for a change... View
Ciara Sheehan - 18 hours ago
Well they better stay home for 2 weeks!! View
Kristine Barker - 20 hours ago
There have been no cases in much of Victoria for nearly as long as Canberra, seems sad and unnecessary to lump all Victorians... View
show more show less
*Results are based on activity within last 7 days

"For a restaurant that opened right in the middle of COVID-19 restrictions, we have felt the love," says manager Vidya,...
Breaking 0

Police have released the details of a 44-year-old man who died after an altercation at the Kingston Hotel on Sunday night...
Opinion 28

UPDATED 4:15 pm, 6 July: Victorians will be refused entry into the ACT from midnight Tuesday (7 July) and Canberrans...
Sport 17

@The_RiotACT @The_RiotACT
After a long shutdown, it seems likely that The Canberra Times' Fyshwick presses will be permanently closed as staff enter consultations with ACM management https://t.co/8ZWBfWKZJy (1 hour ago)

@The_RiotACT @The_RiotACT
It's all but official - even if the AEC isn't allowed to declare it yet: Kristy McBain is the new member for Eden-Monaro https://t.co/AflfAE5mR7 (2 hours ago)

@The_RiotACT @The_RiotACT
The bushfire royal commission has heard that inter-state crews faced scenes of "total annihilation" with trucks that were mechanically unsound, ill-equipped and poorly supplied https://t.co/kWSwQdOQle (4 hours ago)