Canberra reaches December record temperature, but it was short-lived 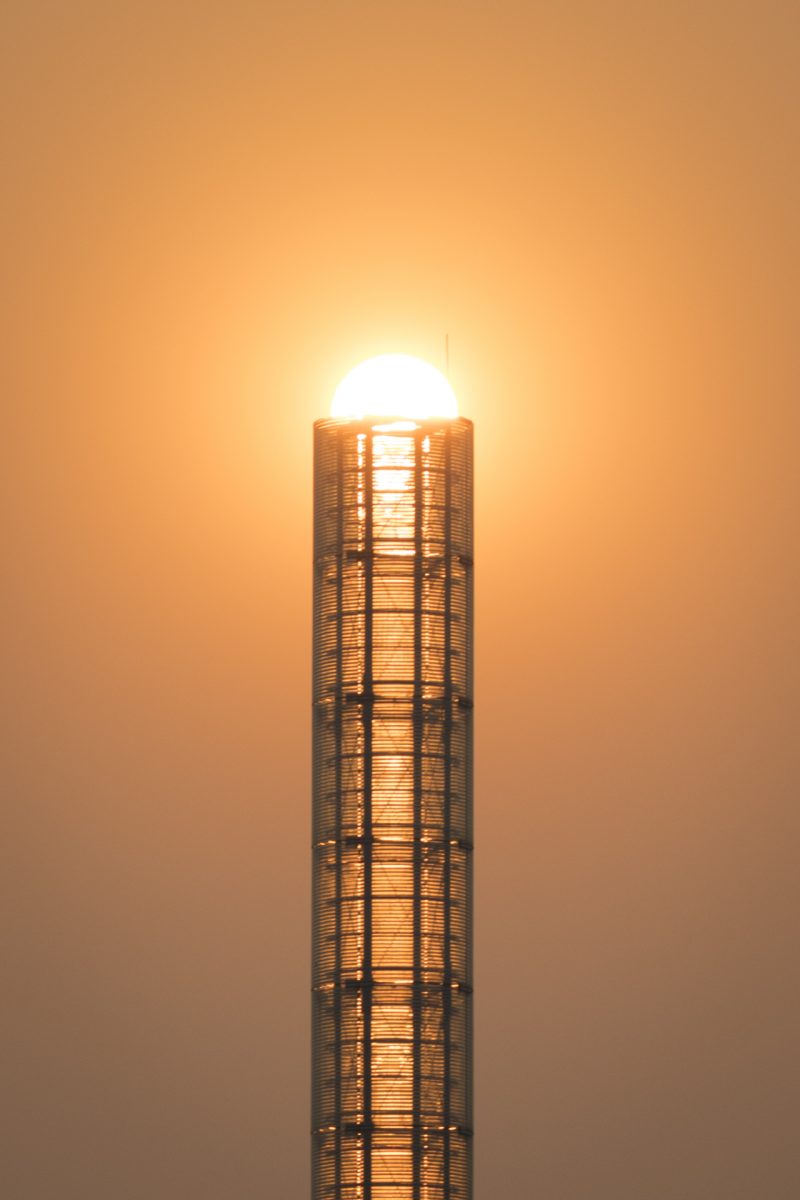 The sun sets over the chimney at the Canberra Glassworks as another smoke haze settles over Canberra this week. Photo: Michelle Kroll, Region Media.

The Canberra Airport has recorded its hottest ever December temperature, with the mercury reaching 39.3 degrees at 3:16 pm.

The previous record December temperature at the Canberra Airport was 39.2 degrees was recorded at on 21 December 1994.

However, the record high was short-lived, as the temperature dropped to 37.8 degrees by 4:30 pm.

Hot and dry conditions are not over yet, with 41 forecast for Friday and Saturday. There will also be elevated fire dangers ahead of the cool easterly changes in the evening on both days.

A cooler 28 degrees is forecast for Sunday.

As Canberra bunkers down for a searing heatwave that is scorching much of mainland Australia, campgrounds have been closed and the ACT Emergency Services Agency (ESA) has joined NSW in declaring a total fire ban until Saturday.

The total fire ban began on Wednesday (18 December) and remains in place until midnight on Saturday (21 December).

ACT Health, ACT Parks and Conservation, and the ESA are all urging communities to be prepared as Canberra could record its highest ever temperature this week.

Wildlife volunteers are also urging people to keep an eye on wildlife and leave a bowl of water out for thirsty animals.

Acting Chief Officer of the ACT Rural Fire Service Rohan Scott said the conditions are very similar to the last time the ESA issued concurrent total fire bans in 2003; however, he said it was a pre-emptive measure to prevent activities that may introduce fire into the landscape.

Mr Scott said anything that produces a spark or a naked flame within the environment is banned.

“We take these sort of measures when the fire danger rating moves to severe, which it will be for the next three days,” Mr Scott said.

“We also look to what’s been happening in NSW, which has seen very erratic and unpredictable fire behaviour, and we may get that here if a fire does start.

“We have got a very, very dry landscape at the moment so we’re just trying to reduce any possible ignitions throughout the landscape. The conditions are similar to 2003. The river flows are starting to reduce and the moisture content in the fuels available to burn are very low.”

Mr Scott said Canberra is very well resourced, with crews from ACT Parks and Conservation pre-positioned in hotspots should a fire start.

“We’re very conscious of fatigue, but we have more than 600 firefighters to draw on and multiple shifts pre-planned so that we can rotate 24/7 if required. Hopefully it’s all just pre-planned and we won’t have to draw on those resources,” he said.

“Our RFS volunteers, Parks and Conservation and Fire and Rescue personnel will be available over the next three days, and we’ll strategically place our vehicles around the ACT to combat anything that does happen.”

He also reinforced the message for people to only ring the triple-zero emergency line if they observe an unattended fire. 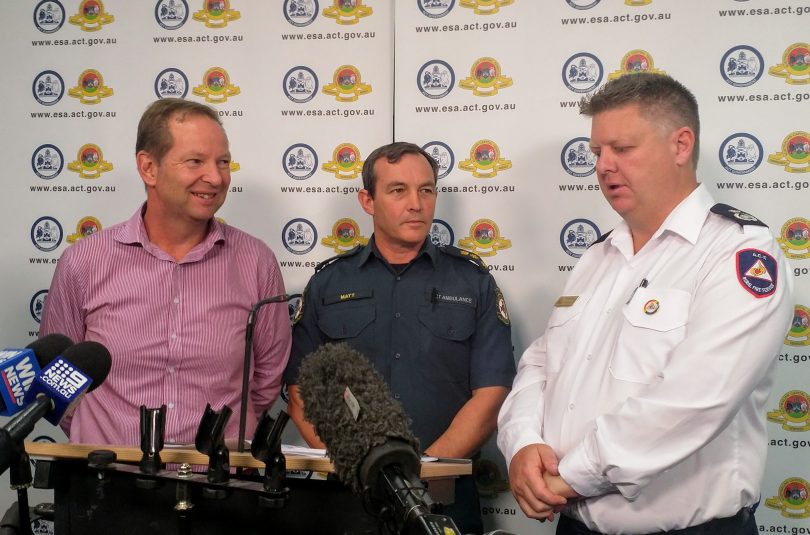 In addition to last week’s closure of the Bimberi Wilderness area until March 2020, ACT Parks and Conservation has closed its managed estate west of the Murrumbidgee River on total fire ban days and has also closed a further five campgrounds for the rest of the fire season.

“The conditions are clear: low rainfall and soil dryness means there is an increased fire risk across the entire Namadgi National Park,” said ACT Conservator of Flora and Fauna Ian Walker.

“We understand that this area, which includes Namadgi National Park, is a much-loved recreational destination. We are striking a balance between community safety and wellbeing, and keeping our parks open for everyone to get out and enjoy.”

“If you are in one of these areas when a total fire ban is declared, you will need to exit immediately,” Mr Walker said.

The ACT Parks and Conservation Service will continue to monitor conditions during summer.

General manager of the ACT Ambulance Service Matt Smith said people need to look out for signs of heat stress in vulnerable people, such as the elderly and children.

Coupled with the poor air quality from the lingering smoke haze, Mr Smith said the main signs of heat stress include dizziness, stomach cramps, nausea, confusion and unconsciousness. He said the best way to avoid heat stress was to drink plenty of water and take extra breaks in shaded areas while outdoors. 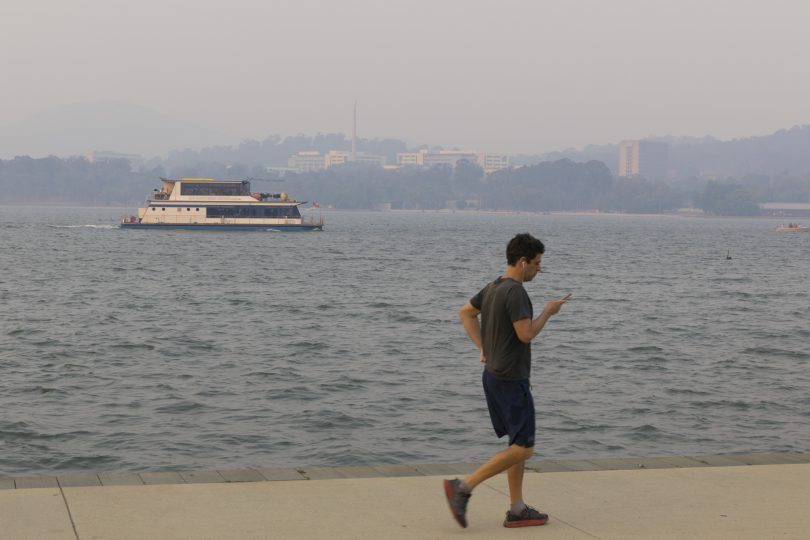 People can stay up to date on fire conditions and emergency advice via the ESA website.

You can also read our story on the top tips to stay safe in a heatwave.

MERC600 - 10 hours ago
Tis a sad thing. Have wandered in at various times over the last 30 odd years, and will miss the tav and Jenny and Gumby. Sti... View
John Coleman - 10 hours ago
Alicia Conley as long as your protest doesn’t delay my McNuggets order thanks View
Opinion 106