Canberra home prices are set to climb in 2020, even if economic conditions deteriorate nationally, according to a new report released today.

In fact, under four scenarios explored by the Housing Boom and Bust Report for 2020, released by SQM Research, Canberra is the safest bet in the country.

While Sydney and Melbourne will boom under the best-case scenario with double-digit growth figures, if the economy heads south only Canberra looks likely to offer consistent improvement and stay in healthy positive territory.

The report sees Canberra in a growth range of 4-8 per cent next year if the RBA cuts rates by 0.25 per cent (to 0.5 per cent), the trade wars stabilise and APRA stays its hand. That prediction drops to 2-5 per cent if the regulator steps in to cool an overheated market, putting Canberra behind most capitals. But if trade talks collapse, the economy weakens, the RBA cuts the cash rate to zero by end of 2020 and starts printing money (quantitative easing, QE), Canberra comes into its own.

The other capitals slip back to zero or even go negative but Canberra remains a solid 4-7 per cent.

“Strong population growth rates, First Home Buyer concessions, lending rate cuts and a reasonably strong economy will help,” he says. “On the flip side, a fairly strong pipeline of new stock may keep a lid on things.” 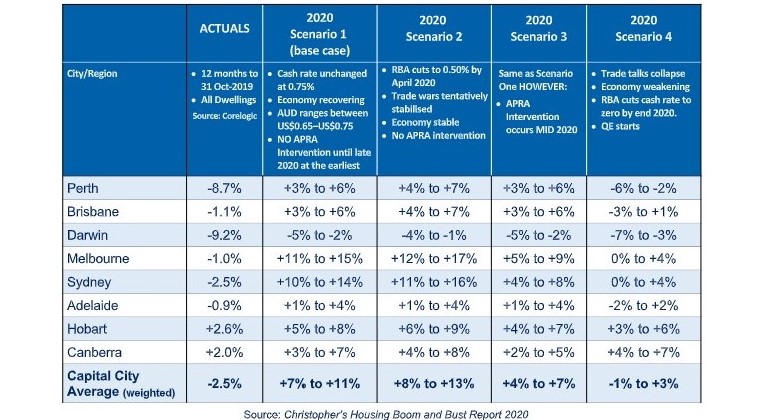 He says that even if the national economy does have a bad year, the ACT market may well still do well as the Federal Government may aim to increase spending, once they get their budget surplus.

His pick of the suburbs is Belconnen, due to its tight rental market.

The report says that most of Australia’s capital cities will benefit from the interest rate cuts and loosening of credit restrictions to record dwelling price rises over 2020 with Sydney and Melbourne leading the charge.

The base case forecast is for dwelling prices to rise nationally between 7 and 11 per cent, which is a strong bounce back from the price falls recorded over 2018 and the first half of 2019.

Sydney and Melbourne will drive the rises. The forecast is for Sydney to rise 10-14 per cent and Melbourne 11-15 per cent. Other cities are also expected to record price rises.

The base case forecasts assume no changes in interest rates and, importantly, no intervention by APRA. The base case also assumes a recovering Australian economy that has responded to the rate cuts of 2019 and reduced international trade tensions, plus ongoing strong population growth rates.

“The Sydney and Melbourne housing markets have recorded a sharp turnaround in the second half of 2019 following on from the surprise result of the Federal Election, interest rate cuts, the loosening of credit restrictions and ongoing strong population growth rates,” Mr Christopher says.

“These factors are expected to drive the national housing market into 2020. In a close call, APRA is expected to not immediately intervene despite the strong price rises.”

But doubts remain about the sustainability of this new recovery.

“Sydney and Melbourne are rising from an overvalued point. Long term, our two largest housing markets look vulnerable and forever reliant on cheap credit,” he says.

“Housing debt, while falling compared to GDP over 2019, is still very high. Better value can definitely be found elsewhere such as Perth and Brisbane.”

The canberra housing market has always been primarily impacted by national government changes. Prior to every election sales slow, pending outcome. When liberals win, house prices usually drop as they cut the public service, only to then bounce back a year or two later as they privatise government services. When labour wins house prices usually rise as the public service expands. I once under took a research project tracking median house values per suburb since the inception of canberra as part of research on house energy star ratings, and this patern was blatantly clear.
Right now though some very different patterns are emerging. Federal government services are expanding unusually under a liberal government. This is strengthen median house values. Canberra also has high numbers of overseas returnees from dfat, pushing up family house values. But apartments are a very different story. There is huge oversupply in single and two bedroom apartments with more coming on line daily. Three of the four universities in Canberra are seeing massive restrictions as overseas students dry up. The seviced apartment and airbnb sector has collapsed, due to restrictions on movements like state public servants doing secondments in federal departments and reduced tourism. Basically the rental market for one and two bedroom apartments is in a nose dive, while oversupply is continuing unchecked. It is far from clear, when this segment of canberras housing market will recover. The overall positive market figures are firmly propped up by the 3beddy suburban family market that is I’d agree, likely to remain well insulated at least in the short-term from global economic slow down.

As with any disaster, the rich are getting richer and the poor are getting poorer. As a public servant town, Canberra has neither many poor, nor rich, so will remain more stable than most

By the end of the day if we buy well we won’t have a significant loss even in tough market. Units and houses are totally different asset classes, even if the report say ACT moving up, it means that some asset base on land value increase the average and the median and some inferior product under heavy supply will remain flat or will increase only poorly over one single property cycle .
When you buy Strata units with high cash flow risk, you must run proper risk management to validate equity risk and return. You will be surprise as many marketers and research reports along the history didn’t and haven’t nail it at all.

That’s a sound approach Yaron. I’ve written a report on the ACT Economy and how it correlates with the property market and can share it with you if you are interested?

Sam Dodimead yes, thank you , I m interested. You can send to info@investinproperties.com.au or PM. Thank you again .

Joan Phyland ACT housing market growth is largely driven by solid economic growth and a relatively low level of effective unemployment which sits at 3.3 per cent, compared to Australia with 5.3 per cent.These conditions are favourable for a strong housing market and make it an attractive destination for property buyers which create the demand and price increase. The ACT enjoys a high investor serviceability ratio which has significantly benefited investors who have found it easy to service their loans relative to the rest of the property market, However, the case is not the same for the unit market which is suffering from an increased number of new dwellings relative to its population growth. I am not sure about Braddon and Reid, however they include in the ACT unit market which i am certain that the risk is high. If you want to run a proper risk validation on those suburbs and the individual properties you detected, please send me a PM. I think with your investment budget, there are better opportunities that associate with lower equity and cash flow risk. Low risk means higher returns, solid and healthy capital growth every year, good valuation results and better utilise your money.

Sonja Nobbs I’ma make bank if I ever sell 😂

are you sure? I feel currently the market is a bit over saturated with units.

The central case in SQM’s Report was interest rates would not drop in 2020 however Canberra property prices, which combine units and houses would appreciate. If you separate these the result will likely show houses doing the heavy lifting.

In my opinion multi-unit market is operating at extremes. On one end there are projects overpriced by $500 – $1,000, or offering equivalent incentives. At the other are some really well priced buying opportunities backed by high caliber developers.

This is really quite grim news for people hoping to have a place they can call their own, particularly when incomes for most will grow (if at all) nowhere near as quickly as housing prices.

A national economic model so heavily reliant on endless real growth in housing prices cannot be sustainable in the longer term.

How many utes have you got??

Based on an assumption that the economy won’t slow (which is happening), international trade wars don’t keep escalating and interest rates don’t rise.

“The base case forecasts assume no changes in interest rates and, importantly, no intervention by APRA. The base case also assumes a recovering Australian economy that has responded to the rate cuts of 2019 and reduced international trade tensions, plus ongoing strong population growth rates.”

Hi Veronika, What do you believe will cause interest rates to rise in the next 12 months? SQM did model deteriorating trade relations between US and China and Canberra values remained strong.

SQM’s report didn’t state interest rates would increase, and when they modeled the other circumstances you’ve mentioned they determined property values would increase. If you’d like a copy of the repost DM me your email address and I’ll send it to you.