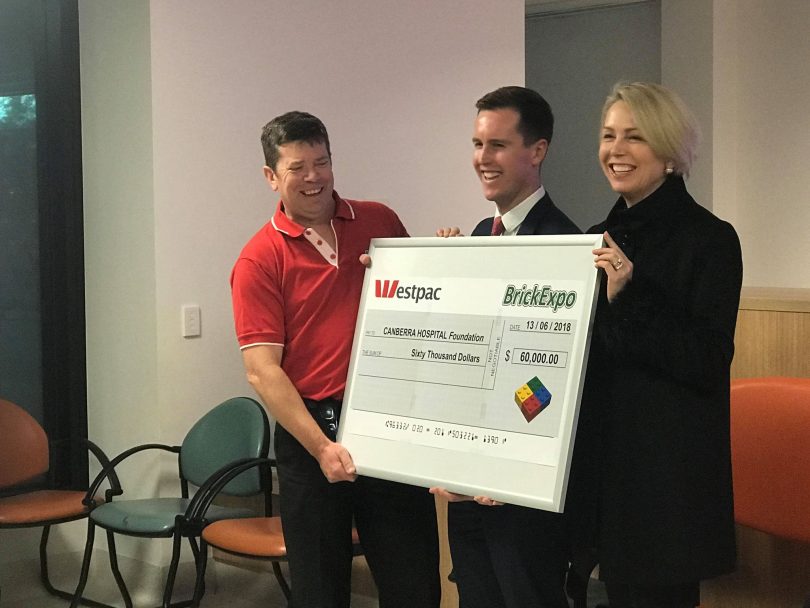 LEGO enthusiasts Brick Expo have donated $60,000 to the Centenary Hospital on Wednesday morning (13 June) with Labor MLA Chris Steel receiving the cheque from the Chair of the Brick Expo organising committee David Boddy.

The Canberra Brick Expo have given a cheque to the Canberra Hospital’s paediatrics unit for the eighth consecutive year, bringing the overall total donated to more than $350,000.

Brick Expo is an annual exhibition where LEGO enthusiasts can view displays of rare and unique creations, including trains, planes, spaceships, racing cars, famous monuments and city sculptures while raising money for the paediatrics ward at the Canberra Hospital.

Labor MLA Chris Steel said the donations have made an amazing contribution to the improvement of the paedaitric ward.

“It is fabulous that we have an event like Brick Expo in Canberra every year since it began running in 2010,” he said.

“It is amazing that over the years the Expo has been running, that you have been able to contribute $350,000 to improve the comfort here in the paediatric ward and to buy much-needed medical equipment that really makes a difference to children’s lives.” 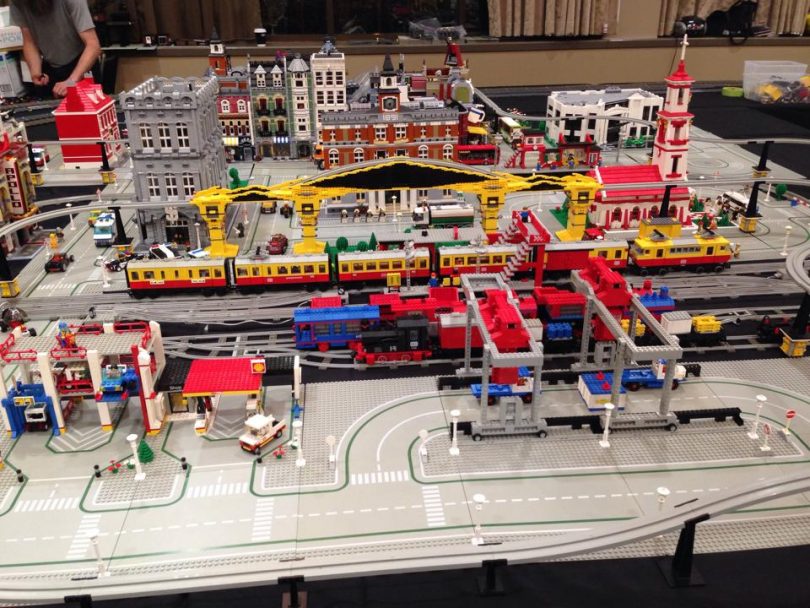 Brick Expo is an annual exhibition where LEGO enthusiasts can view displays of rare and unique creations. Photo: Supplied.

“It all started when a couple of guys had LEGO in their garage and thought that they would show the public,” he said.

“As a result of all that hard work of putting on the show, it became apparent that we could do a lot of community fundraising and what better place to invest than back into paediatrics at Canberra Hospital.”

Mr Boddy said the event was still running due to the support of Canberrans and hard work from volunteers.

“We enjoy the event ourselves, but most of all, we love hosting an event that is family friendly, affordable and popular with people of all ages and backgrounds,” Mr Boddy said.

“It is really a joy to see the looks on people’s faces as they arrive and see rooms full of fantastic LEGO models. Like Christmas, Easter and a surprise birthday all rolled into one.

“The support of locals, as well as regional visitors, is what keeps us going every year. The funds we donate are based on the generosity and support of the local community, so it makes sense that the money stays local and supports local children while in hospital.

“With ongoing community support, we hope to be back here in 12 months topping up our donations with another cheque.”

The 2018 Brick Expo will be as big and diverse as previous years, with displays including a large selection of moving LEGO trains, LEGO mosaics and displays of space, pirate and dinosaur themes.

Tickets for the 2018 Brick Expo, which will be held Friday 10th August – Sunday 12th August, are currently on sale.

Timothy Bailey - 27 minutes ago
I love letting it make its decisions, which also leaves more of me left over for the task of driving. I did try putting it in... View
Motoring 5

Graeme Tyers - 1 hour ago
James Forge will be interesting to see the next gen. 3lt petrol or diesel, RWD (potentially AWD) and a hybrid option... View
Dennis Williams - 2 hours ago
Love the styling totally agree the Mazda6 is a fantastic piece of design but when I test drove it many years ago I couldn't b... View
Opinion 5

scott123 - 2 hours ago
This would be a great boost to the Canberra community as a whole. Particulary to all the bussiness that have suffered as a re... View
nobody - 2 hours ago
Ha, this part of the proposal has more spin than a burnout, “and would be carbon-neutral and environmentally sustainable”... View
TimboinOz - 2 hours ago
Despite the assumption that Barr & Rattenbury would hate the idea, I and many other Canberrans would support it and attend. F... View
News 5

judesh - 3 hours ago
Thank you for this article. As one of the beneficiaries (10 years) of the very successful, and irreplaceable, aqua program, m... View
Ross Buchanan Young - 4 hours ago
Well said! The aquafit programs have been my fitness mainstay over several years, as I contend with osteoarthritis. I see no... View
tino - 4 hours ago
I must congratulate AIS for the way it announced its close-down, it's a master stoke in PR. The strategy of minimizing the ne... View
Community 1

Maya123 - 5 hours ago
I ended up going back part time to my initial job for a couple of years, as several people lobbied for my return. Then money... View
show more show less
*Results are based on activity within last 7 days

The promise of better light rail access to the Mitchell business hub is now a reality with services commencing on...
Community 38

@The_RiotACT @The_RiotACT
Did you get behind last year's at-home fitness craze? While a little late to the party, Lottie Twyford gave an at-home full-body burn a go https://t.co/hIahtznAFa (1 hour ago)