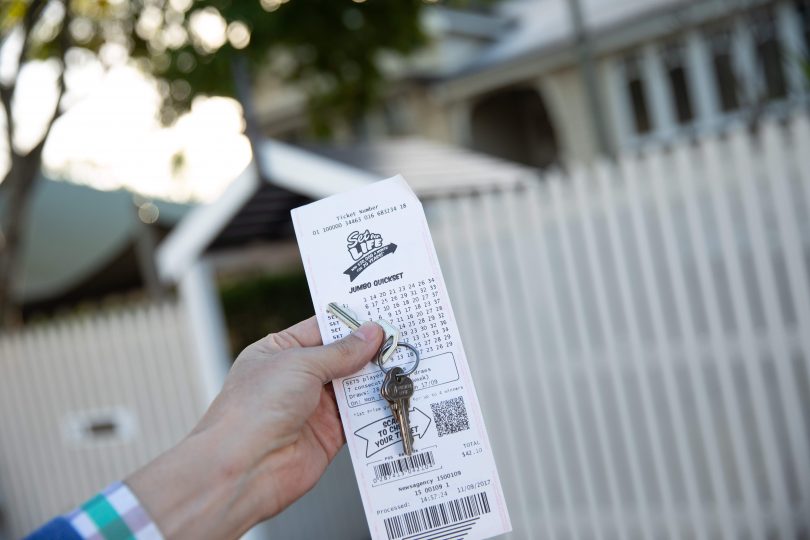 The Set for Life division one prize winner will scoop $4.8 million paid over 20 years. Photo: Supplied.

A Canberra man in his early 20s will receive $4.8 million, paid in instalments of $20,000 a month for 20 years, after being declared the sole division one winner of the Set for Life draw 2001 yesterday (27 January).

The Canberra man, a member of the Australian Defence Force, said he would have to call in sick and spend the day celebrating.

“Oh my God, I am supposed to be working today, but there’s no way I will be able to. This is really good! This is crazy. This is so crazy,” he said after being contacted by The Lott to confirm the windfall.

The winner held the only division one winning entry in the Set for Life draw and was oblivious to the win until contacted by The Lott.

When asked how he planned to enjoy his prize, the young man said he was “definitely going to look after my parents”.

“Then I might get myself a house. I am sure there will be a few holidays and investments too.

“I am sure I will keep working; I want to be sensible with my prize.

“It’s just so crazy to think about!”

In 2020, there were 16 Set for Life division one winners across Australia who will receive $76.8 million over the next 20 years.

The latest winner joins several other lucky Canberrans who have won big lately.

When two long-time Canberra friends accidentally doubled up buying their regular Oz Lotto tickets in April last year, it netted them the only division one in Australia of $2,289,010.50.

Phill Martin - 6 hours ago
La Niña was forecast by the Bureau of Meteorology in the middle of last year, so 'summer' was exactly as I had expected it t... View
Capital Retro - 21 hours ago
Given we were told last year's hot, summer weather was the new norm, does this mean this year's coolest summer in 10 years sh... View
Kay Makin - 21 hours ago
Amanda McLean this looks like one of your beautiful water paintings. View
News 67

Graham Byrne - 7 hours ago
I was wondering what all those cameras were about. They are everywhere. But I’d rather see more red light cameras. View
Property 14

JS9 - 7 hours ago
Absolutely agree Brendan. Unlike some on here who seem to see apartments as almost the work of the devil, I don't mind densif... View
HiddenDragon - 8 hours ago
Hooray! - we're one of the richest (on paper) countries in the world with one of the dumbest economies - having dropped from... View
bj_ACT - 14 hours ago
ACT Government should be mandating apartment buildings with 3 bedrooms or large two bedroom units with multiple living areas.... View
News 7

Mike of Canberra - 8 hours ago
Over many years, the only consistency I've seen from the green-left is their apparent dislike of ordinary working people actu... View
News 6

steve2020 - 9 hours ago
The disrespect towards women had been encountered in many workplaces that I had worked in, in Canberra. The irony is that bec... View
jybrik - 17 hours ago
What a thoughtless, demeaning comment. "So, get over it" is a sentiment that we as a society should be fighting against, as i... View
Business 1

Nick Swain - 10 hours ago
Even in the hardest lock down time Green Square was the place to hang out - there was a strong sense of community. Many of us... View
Community 25

Bernard - 20 hours ago
Problem ACT Government have with promotions and perceptions (possibly the realities) of conflicts of interest are nothing new... View
Motoring 2

keek - 21 hours ago
Yeah, you basically have to ride like everybody else on the road is trying to kill you. People trying to change lanes on top... View
Lifestyle 29

Jackie White - 21 hours ago
There's always one or two hanging around my place each year, but without fail, they wander into the neighbour's yard and her... View
show more show less
*Results are based on activity within last 7 days

@The_RiotACT @The_RiotACT
What do you think of Allycorn? The giant pink unicorn will grace Canberra's skies as part of the Canberra Balloon Spectacular! Here's where you can catch this fantastic creation, and say hello to Skywhale and Skywhalepapa https://t.co/6Nw9532xSJ (9 hours ago)

@The_RiotACT @The_RiotACT
With a long weekend coming up in the ACT, there’s lots to see and do in Canberra as Enlighten gets into full swing https://t.co/FoK8puPWeE (10 hours ago)

@The_RiotACT @The_RiotACT
The ACT Coroner found difficulties with staffing, and insufficient staff education were two of many factors that contributed to four deaths at Canberra Hospital in 2015 and 2016 https://t.co/e9DTYUNM6v (12 hours ago)