Growth in detached house values was twice that of units and townhouses in 2020. Photo: File.

According to CoreLogic, Canberra’s housing market was the second-strongest in the country in 2020, posting a 7.5 per cent rise in home values.

Only Darwin, with a 9 per cent rise, came in ahead of the national capital, where stand-alone house prices outperformed units and townhouses by more than two to one.

The latest CoreLogic report shows that house values rose 8.5 per cent in 2020, while units were up 4.1 per cent over the year.

Canberra remains the third most expensive housing market for both houses and units behind Sydney and Melbourne.

The results pay testament to the stability of the ACT’s economy in the face of the COVID-19 pandemic and the impact of restrictions on business activity and employment.

But it also points to not enough houses on the market to meet demand, particularly in the last quarter of the year when agents reported presentable properties were being snapped up quickly.

An investor retreat from the market was a dampener on the units market but allowed first-home buyers to gain a foothold in that burgeoning sector, particularly with the Commonwealth’s HomeBuilder scheme fuelling new builds.

In the last month of the year, Canberra dwelling values rose 0.6 per cent with listings tapering off before the Christmas-New Year break. 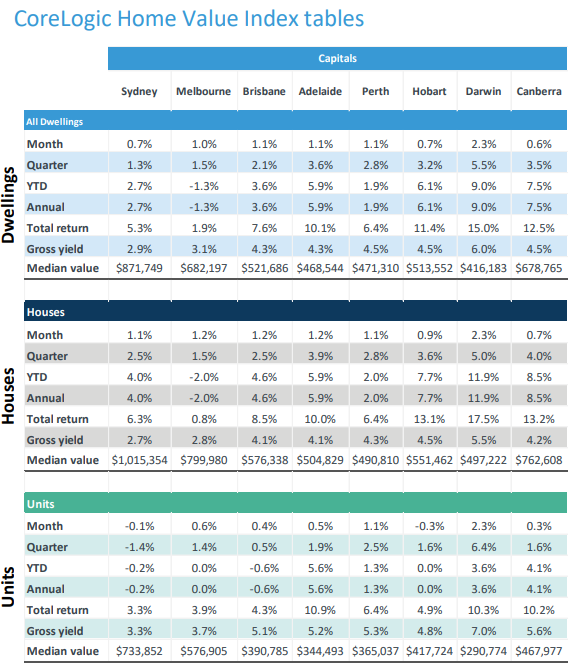 Nationally, December produced a 1 per cent rise in CoreLogic’s national home value index. The third consecutive month-on-month rise followed a 2.1 per cent drop in dwelling values between April and September.

CoreLogic’s research director, Tim Lawless, said the year was marked by a dip in values due to COVID-19, and unprecedented volatility in the transaction space.

“The number of residential property sales plummeted by 40 per cent through March and April but finished the year with almost 8 per cent more sales relative to a year ago as buyer numbers surged through the second half of the year,” he said.

”Despite the volatility, housing values showed remarkable resilience, falling by only 2.1 per cent before rebounding with strength throughout the final quarter of 2020.”

The rebound came thanks to government supports and record low interest rates.

Regional markets also benefited as the success of working from home and COVID-19 restrictions stimulated interest in cheaper housing outside of the capital cities.

The relative containment of the virus and subsequent economic recovery has lessened the likelihood of defaults come March when government supports are due to expire, but as the current COVID-19 outbreaks in Sydney and Melbourne show, the risks remain.

In a stable and COVID-free Canberra, home values look set to continue rising in 2021, particularly for houses, which the market cannot get enough of.