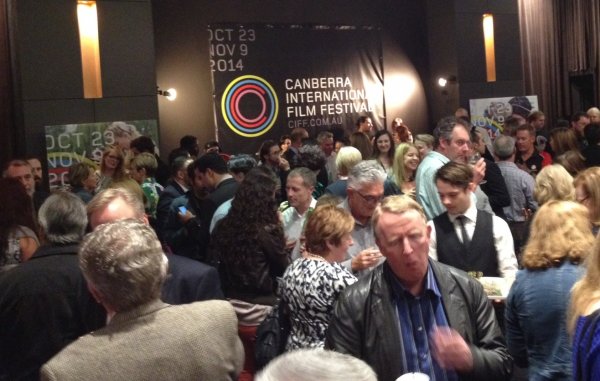 “What better celebration of independent world cinema than to tear Hollywood to shreds?” Canberra International Film Festival director Lex Lindsay is introducing the opening night movie, David Cronenberg’s “Maps to the Stars.” It’s a bold choice: Cronenberg is known for the haunting and grotesque images of movies such as Scanners and Videodrome and Maps to the Stars is no exception. An attack on the emptiness and vicious competition behind the glitter of stardom, it starts off intense and does not relent until the credits roll. Lindsay announces that the choice of Cronenberg’s film as festival opener “may somehow scandalise… but we’re 18 and we want to be scandalised.”

This is the 18th Canberra International Film Festival and 18 certainly seems to be the age of maturity. For one thing, this is the biggest festival yet, with 64 films playing over 18 days in 180 sessions. But with size also comes variety. Yes, the winners of Cannes and Sundance are present and accounted for, but there’s also room for smaller documentaries, period pieces and even “burqa-wearing vampires” (in Iranian horror film “A Girl Walks Home At Night”). Fortunately 18 is also the age of legal access to alcohol, and the festival’s sponsors provided the opening night audience with ample fortification to survive Cronenberg’s latest jaunt into madness and horror.

I had a chance to speak with Lindsay about the festival’s “in your face” attitude and he confirmed that it was intentional. His vision is for the festival to engage more with controversy, with films directly addressing politically hot topics such as funding for higher education, climate change and even burqas – although, personally, I think the threat of burqa-wearing vampires is one of those rare issues that transcends party politics. Lindsay almost comes across as cocky: “If seeing prestigious award-winning cinema is your thing then we have you covered.” But maybe a little cockiness is appropriate: in terms of variety and quality, this is a genuinely impressive festival.

The festival has deep roots in Canberra, starting 18 years ago (depending on who you ask) on a much smaller scale at the University of Canberra. The University has stayed involved with the festival as a sponsor. I asked Geoffrey Hinchcliffe, the head of media arts at the University, about the festival and he was enthusiastic both about the festival and its creative goals. He described this year’s program as “something for everyone”, with edgier works standing alongside more standard heart-warming fare. He sees the festival as a conversation with Canberra that represents diverse international voices. I asked him for a tip on a movie to look out for, and after considering the question carefully he finally suggested “The Dead Lands”, a period action epic about Maori warriors.

The opening night audience was highly engaged, although with Cronenberg kidnapping our attention it was hard not to be. The festival is coming into its own and testing its limits. I got a sense from Lindsay and others connected to the festival that they want to show Australia (and possibly also the world) that there’s more to Canberra than just parliament house, that there’s a rich culture here hungry for a little attention. Canberra’s flagship festival is also its enfant terrible, challenging film-goers to take notice. And with the exciting range of films on offer, maybe there’s something to be said for the opening night’s attack on Hollywood schlock.

As for “Maps to the Stars”… On the surface it’s an attack on Hollywood life, but it’s really about incest and hereditary madness. It just happens to be set in Hollywood. It’s oddly restrained for a Cronenberg movie with hallucinations kept to the bare minimum – these are some of the politest ghosts ever put on screen. But it keeps you tense and it keeps you involved. I genuinely felt for the characters even if it felt like the director didn’t want me to. Was it worth seeing? Yes. Was it a good start to the festival? Absolutely.

We have a few double passes to the festival to giveaway. Simply answer the following question in comments below by Tuesday 28th October to be in the running:

For how many years has the Canberra International Film Festival been running?

The Canberra International Film Festival runs until November 9 at The Dendy in Civic. Session information at: www.canberrafilmfestival.com.au/

Jonathan Nicholl - 60 minutes ago
Brian Day interesting article but it’s not accurate - the first fleet arrived in Sydney Cove on 26 January 1788. Indigenous... View
ghutch - 7 hours ago
A lot of good comments. Why don't we celebrate Oz Day on 1 Jan. Yeah I know you all still asleep from new year eve. But is th... View
Jenny McInnes - 7 hours ago
David Johnson it most likely was a public holiday there then View
Lifestyle 1

@The_RiotACT @The_RiotACT
Have the voices of post-Vietnam veterans been missed in the fight over the War Memorial expansion? Some veteran organisations say yes https://t.co/UC34DwlGFC (38 minutes ago)