Canberra Raiders “shoved it straight back” in the face of critics, says Stuart 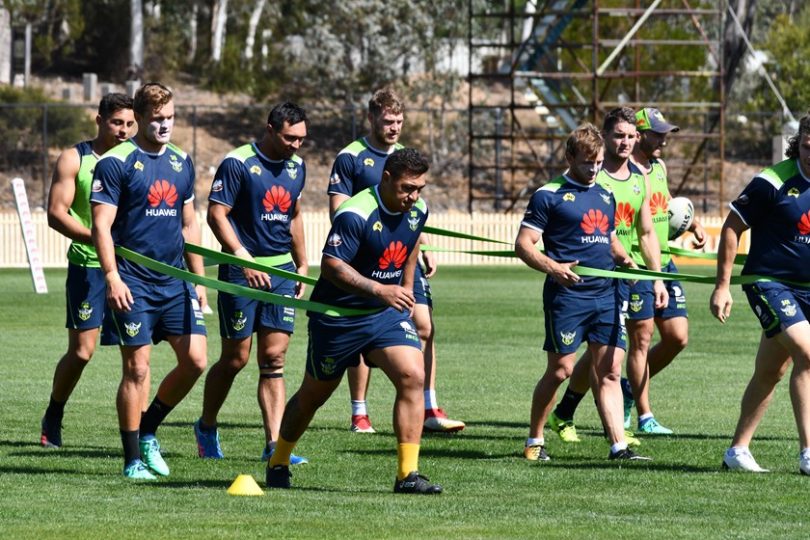 Raiders coach Ricky Stuart said the Green Machine has proved the doubters wrong who called the Canberra side an unfit football team.

After a dreadful start to the season, the Raiders ended a four-match losing streak with a 26-10 win over the Bulldogs last week with just one fit player on the bench.

“All the critics were telling me over the last month that we were an unfit football team. We played with five interchanges last week so I think that shoved it straight back in their face,” he said.

“I thought individually we were strong, especially the first half and we covered one another’s back quite well, which I expect from our boys because last week we had a fair bit of adversity to play under and they handled that pressure and that fatigue very well.”

The former Eels coach is wary of Parramatta and has his fingers and toes crossed that the winless side won’t click this Saturday night.

The Eels are dwelling on the bottom of the ladder but the Raiders coach is expecting the Eels to bounce back.

“Everyone’s beating each other at the moment and Parramatta have a wonderful team there.”

“I sense they’re about to click and let’s just hope it’s the week after this one. They’ll click at some stage.”

After being dropped after the Raiders round three loss, Blake Austin will return to five-eighth following a knee injury to Sam Williams.

Stuart admitted that he was impressed with the response from Papalii and Austin as the pair return to the side for the Saturday night clash.

“The way Josh and Blake have handled themselves with their attitude has been fantastic and they will both be great additions to the team this weekend.”

Dee Kaden - 13 minutes ago
That could almost be 5,400 homeless off the streets!!! View
Slim Hunter - 2 hours ago
Natives or weeds that require watering?🤔 View
Jim Andrews - 4 hours ago
Nathan Burraston With respect my friend, you dont know what you are talking about. First up you cant just plant a tree anywhe... View
Lifestyle 24

Jim Webb - 17 minutes ago
Looking forward when it reopens. 2019 image View
Di Green - 1 hour ago
I so enjoy these gardens View
Vee Bee - 4 hours ago
We miss it so much :( View
Community 32

Chris Davis - 19 minutes ago
Hope they check out how Narooma runs it View
Steph Hamleed - 33 minutes ago
Melanie Leedham bring the kids to this View
Acton - 1 hour ago
In 1992, a shipping container of 28,000 rubber ducks fell overboard on its way from Hong Kong to the United States. Carried b... View
News 17

Sam Oak - 32 minutes ago
Wrong, even with no restrictions the death toll from covid would still be less than the flu. That’s because people naturall... View
MERC600 - 57 minutes ago
Well had a quick look at this, a heap of possible dates and possible openings and possible closings ( if it goes backwards ).... View
Capital Retro - 1 hour ago
Facts have nothing to do with politics. View
Opinion 45

@The_RiotACT @The_RiotACT
Got an incredible idea for a #startup that will change the world? The @CBR_IN and @MeyerVandenberg say getting legal advice early can save you a whole lot of pain down the track https://t.co/P9C9WvzEpN (36 minutes ago)