Canberra Women’s Shed powering ahead with tools of their trade 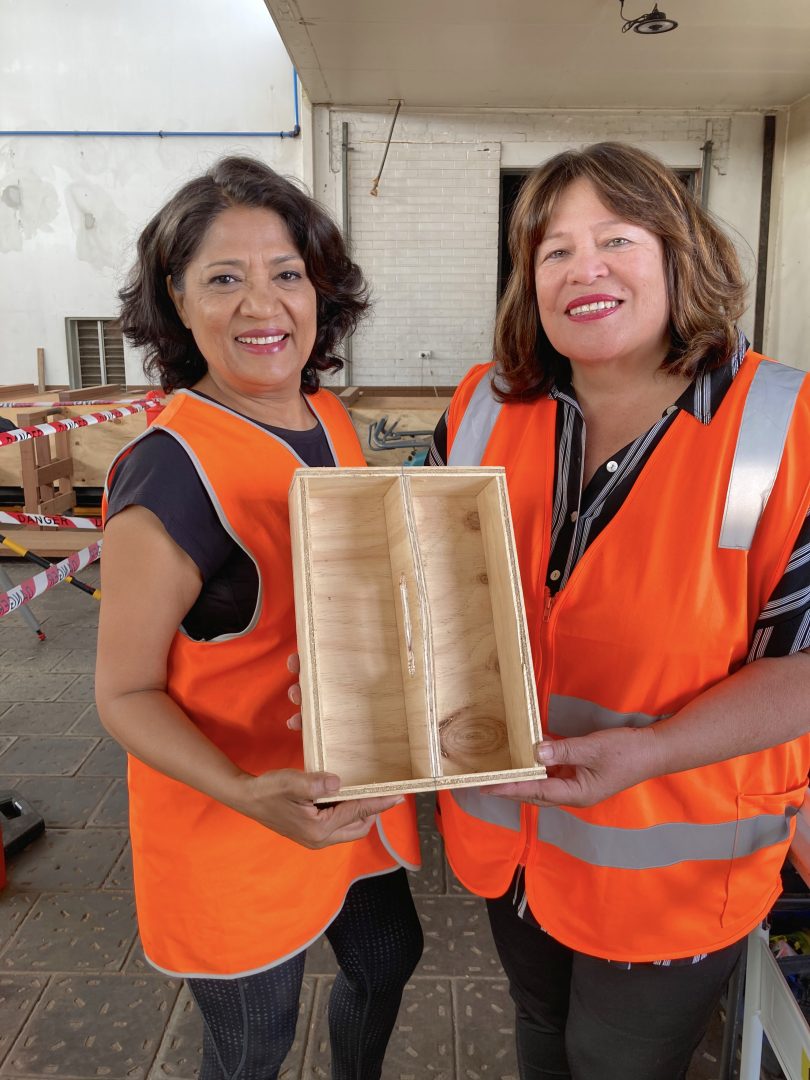 In the four months since the founders of Canberra’s Women’s Shed opened their first box of business cards, they have welcomed almost 100 members while also building the foundations of a community for women empowered by power tools.

More than $20,000 has also been received to help fund workshops for women of all ages who want to know more about drop saws, nail guns and power drills.

“We’re getting phone calls every day from people either wanting to join or business or community groups wanting to help us,” Canberra Women’s Shed president Sunita Kotnala tells Region Media.

“We’ve now got 98 members in less than four months and it’s such a joy to be building on what we’ve started.” 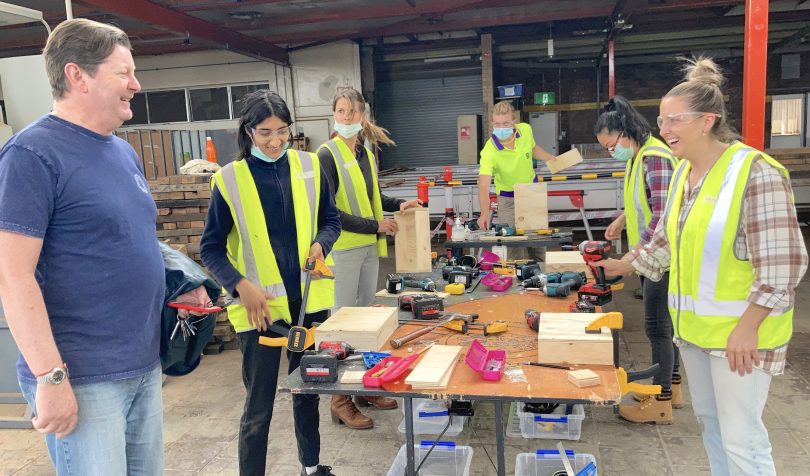 After linking with prominent men’s shedder Jim Thornton, they hammered out the details to build a group that meets each Saturday from 10:00 am to 1:00 pm at Thor’s Hammer in Griffith.

Thor’s Hammer has also been instrumental in employing many female apprentices.

They also meet once a week at the Hughes Community Shed, while providing a range of workshops that empower women with power tools.

“All of the people and groups we’ve connected with also help to support our values to support sustainability, support the community, upcycling, recycling and making sure there is a minimal footprint on the environment,” Sunita says.

The Women’s Shed received a $10,000 grant from Hands Across Canberra to provide funding for tutors to run their workshops, while they also received $5000 to run workshops specifically for young women wanting to learn about building and construction trades.

The Narrabundah Family Medical Practice also chipped in with $5000 from its community chest that helped the group provide workbenches, while Capital Chemist Group also provided $5000 specifically for young women.

“We’re helping migrant women build skills to improve their independence and we’re helping to build houses for a population of turtles at the Jerrabomberra Wetlands,” Sunita said.

From bookstands to building decks, the Women’s Shed participants are also learning about different types of wood and their uses.

“A new bookshop in Kingston, The Book Cow, has requested some bookstands so we’re keen to help out with that project.

“We are just really excited by the way it’s all taken off.

“We’ve become more versatile as a group because we can now operate at different sites,” says Sunita.

“We’re supporting women in the ACT and regional areas too,” says Robby. “It’s been so amazing, and the support we have got is way beyond our expectations.” 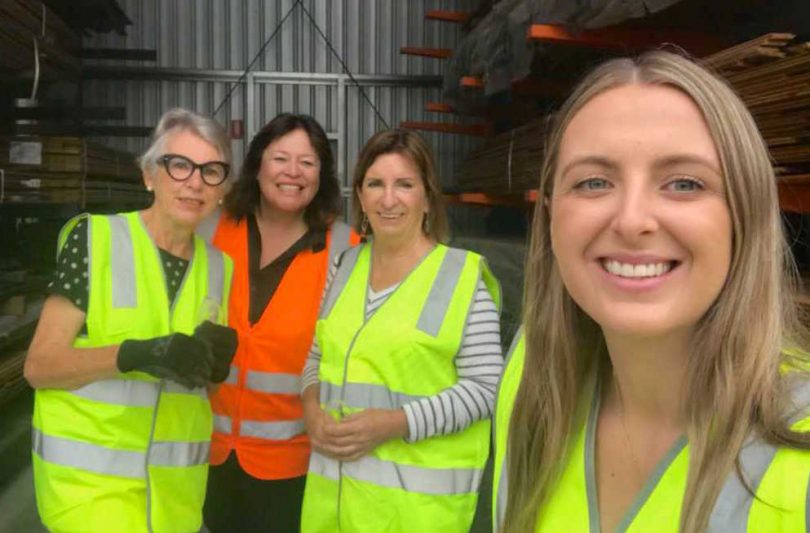 The Canberra Women’s Shed is now tailoring its workshops for mothers and daughters, and they’re keen to hear from community groups wanting to increase their visibility in hi-vis.

“We’re finding women who really want that social connection and can come and talk to people while they work,” says Robby. “There are women who have come back to Canberra or may have lost their jobs through COVID.”

Their next workshop will be on 6 February at the Narrabundah Children’s Cottage junior campus to build items for babies and toddlers.

If you want to get involved, visit Women’s Shed Canberra.

Great to see it so successful- well done!

Where is it located

Thor's Hammer is near the Fyshwick markets I think

Lucy Baker. For any of your tribe ? How cool is this

jybrik - 2 hours ago
What a thoughtless, demeaning comment. "So, get over it" is a sentiment that we as a society should be fighting against, as i... View
Property 8

Capital Retro - 4 hours ago
The ACT government and its controlled land and housing policies has alienated the young people who can't afford their first h... View
keek - 5 hours ago
Awesome news. ACT Labor and the greens really looking out for working families with their housing policies, land rates rises... View
John Mungoven - 17 hours ago
Dream of a home (ie with backyard type) is rapidly disappearing in Canberra. Local Govt policy is for 75% of new residences t... View
Community 25

Bernard - 5 hours ago
Problem ACT Government have with promotions and perceptions (possibly the realities) of conflicts of interest are nothing new... View
News 11

Capital Retro - 5 hours ago
Given we were told last year's hot, summer weather was the new norm, does this mean this year's coolest summer in 10 years sh... View
Kay Makin - 6 hours ago
Amanda McLean this looks like one of your beautiful water paintings. View
Motoring 1

keek - 5 hours ago
Yeah, you basically have to ride like everybody else on the road is trying to kill you. People trying to change lanes on top... View
Lifestyle 28

Jackie White - 6 hours ago
There's always one or two hanging around my place each year, but without fail, they wander into the neighbour's yard and her... View
Food & Wine 10

Ashley Wright - 20 hours ago
Jennie Smith vast majority of the tram works were done in the median strip of flemmington road with minimal impact. There was... View
News 5

Robert Hawes - 21 hours ago
Should be done via the nurse walk-in centres. View
News 26

JC - 21 hours ago
Actually think you will find this “outcome” actually backs up my comments. Do you think both parties came to a $400,000 a... View
chewy14 - 22 hours ago
JC, The other week you were claiming the silence was due to pending litigation which now as we see (and I said) was false. Th... View
JC - 23 hours ago
Life doesn’t work like that. It’s quite clear that for the last year they have been in dispute with the builder over this... View
show more show less
*Results are based on activity within last 7 days

The owners of the Zoo Bar and Grill are taking Canberra's nightlife to the next level by launching the Mile High...
Breaking 3

Police have confirmed that part of a torso found on Mollymook Beach on 26 February belongs to a man from...
News 4

The developer of the problem-plagued Gungahlin pool has been absolved of liability for building defects, including if further damage or...
Lifestyle 28

The Hammer settles into new digs

@The_RiotACT @The_RiotACT
Queanbeyan's Joash Taufa'ahau is on a mission to end hunger and food waste. So far he's walked 1400 km to raise awareness of the issues. Here's what you can do to help https://t.co/2Ksl5Oyv4C (3 hours ago)

@The_RiotACT @The_RiotACT
The largest number of complaints received by the Integrity Commission relate to promotions in the ACT public service, most of which "did not reach the threshold of corruption" https://t.co/YclDjQUzkZ (4 hours ago)