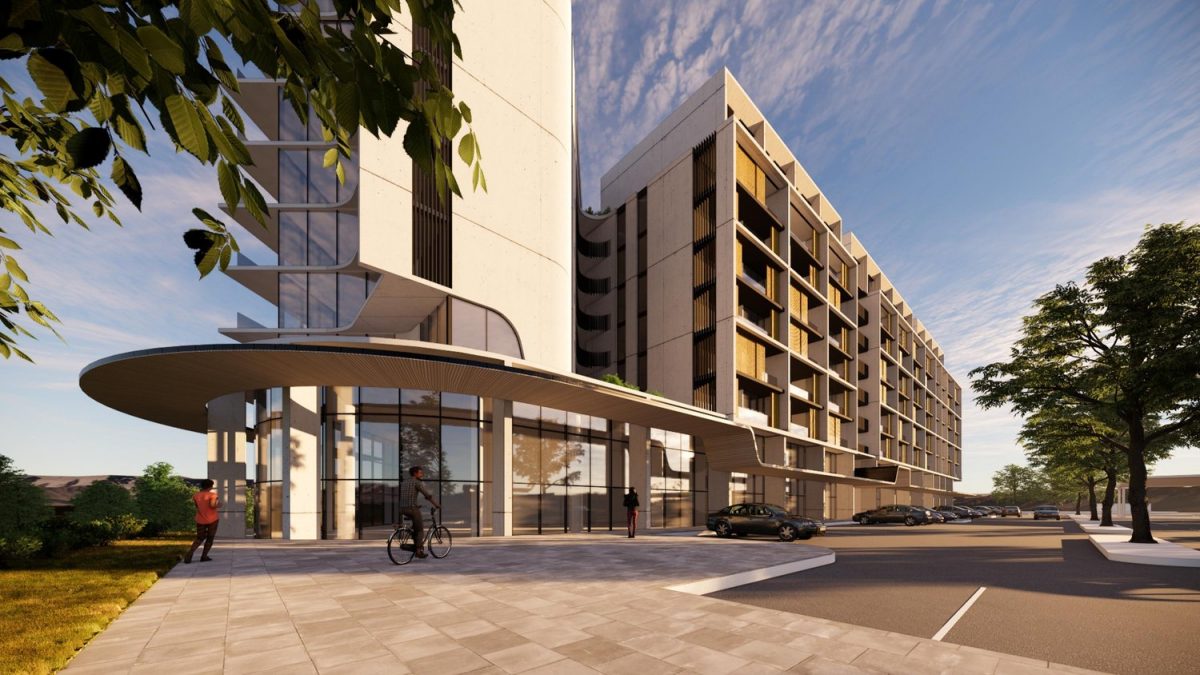 Plans have been unveiled for a nine-storey mixed-used development next to Casey Market Town that will add 219 apartments to the Gungahlin suburb.

KG Capitol and JEGA, which operate Casey Market Town shopping centre, are behind the project and have released plans for community consultation ahead of a soon-to-be lodged development application.

Designed to integrate with the shopping centre, the proposed three-sided development on the CZ1 site on Bentley Place (Block 9, Section 132) will face Casey Pond and provide homes for 500 people, and a number of ground floor retail/commercial spaces.

The proponents say the project will bring a diversity of uses and housing choices to Casey, and an active ground floor of shops.

P L A N I T Strategic is working with the proponents. Environmental Engineer Kip Tanner said the proposed development was designed by the same architects and would draw from a similar palette of materials.

He said it was also designed to have retail spaces that address the car park and bring activity to that side of the town centre.

The project will comprise a mix of one, two and three-bedroom apartments, including some with sky terraces. More than half will have two bedrooms and there will be affordable options. 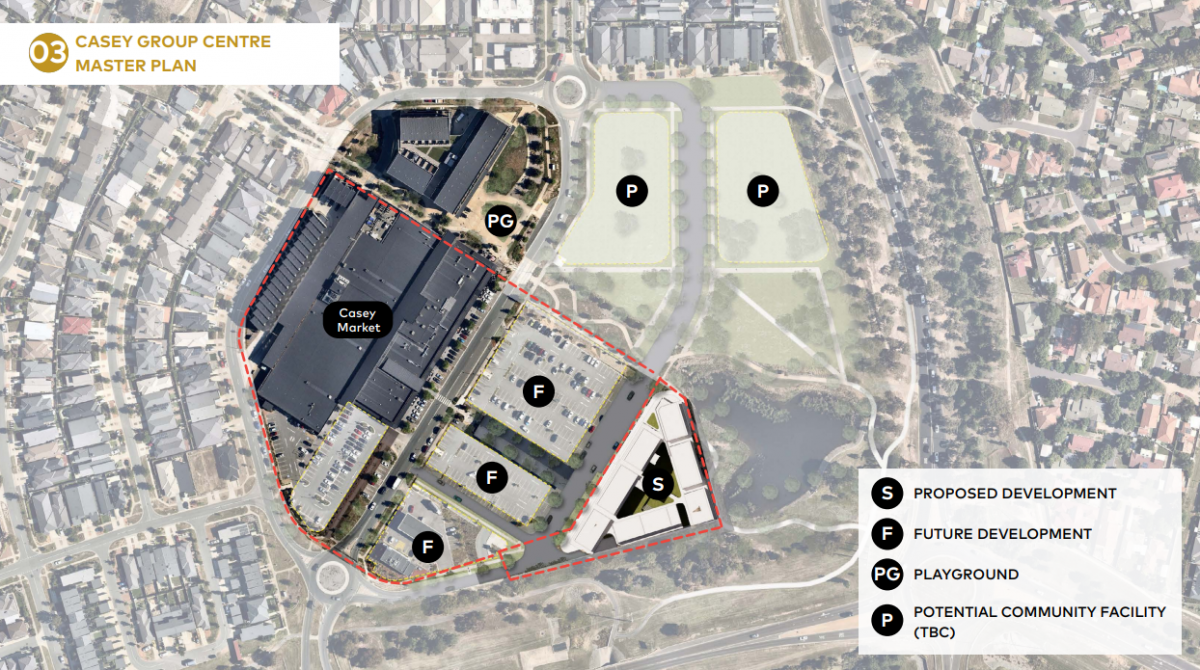 The plans show a feature landscaped atrium and internal courtyard with trees. A sky bridge will link two sides of the building.

Mr Tanner said the open atrium would allow all apartments to have cross-flow ventilation and natural light from at least two sides.

He said the central space created also provided an opportunity for communal space and facilities, and the consolidation of the lifts at a single location would increase the incidental interaction between residents, encouraging them to become a community.

The development will achieve a high level of environmental performance, and the landscaping and amenity of the area will be upgraded.

Mr Tanner said P L A N I T Strategic was investigating a range of measures that would be specified in the detailed design.

“We are working with the design team and new technologies to extract the residual heat from the wastewater and using it to provide hydronic and other heat sources to residents,” Mr Tanner said.

Two levels of basement parking with access from Bentley Place will provide 334 spaces and there will be a secure bicycle cage and workstation at the lower ground floor level.

“A door will provide at-grade access to the path at pond level,” Mr Tanner said.

“This will allow people to access the space without having to ride up and down the basement ramp.” 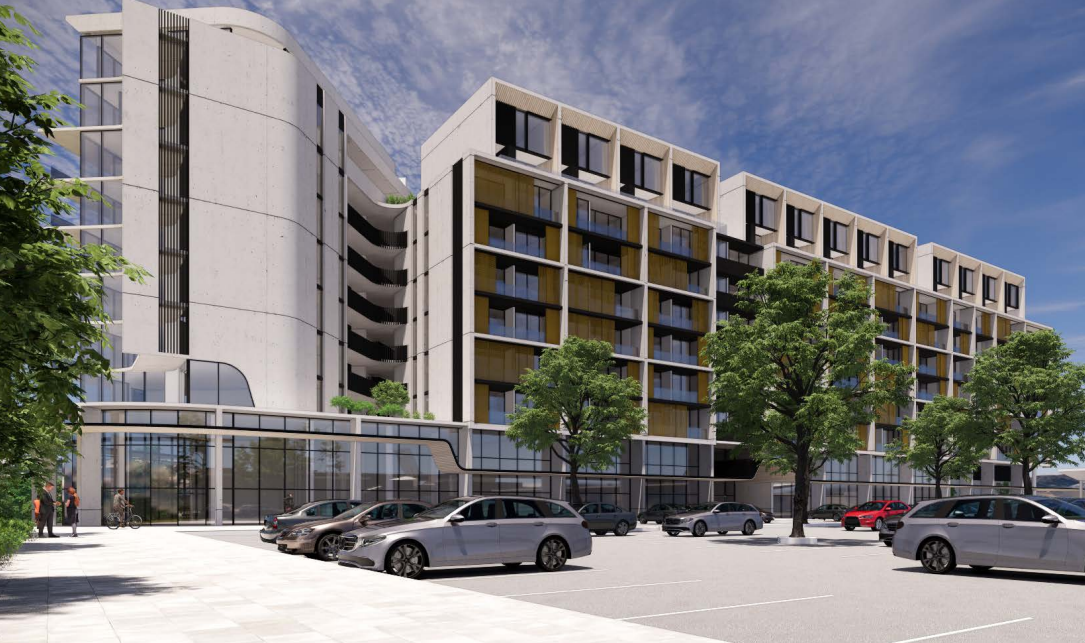 Mr Tanner expected the car park to have electric vehicle chargers, but the details were yet to be determined.

“This is an area of rapidly evolving technology so the best chargers for this building are probably not even on the market yet,” he said.

The proponents say adjoining pedestrian areas will be improved and the development will promote active living and travel.

Mr Tanner said residents would be within walking distance for most of their shopping needs, employment opportunities and community facilities.

He said schools were also within easy walking distance on the other side of Clarrie Hermes Drive, accessible via an underpass.

He said that the Gungahlin Town Centre could be reached via an off-road cycle path that passes under all of the arterial roads and was about a 15 to 20-minute ride.

The building would also provide conveniently located staircases to encourage people to climb them instead of taking the lifts.

There are no neighbouring buildings that will be affected by shadowing.

The proponents hope to start construction late this year, subject to DA approval. 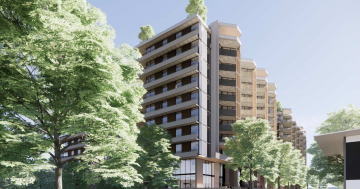