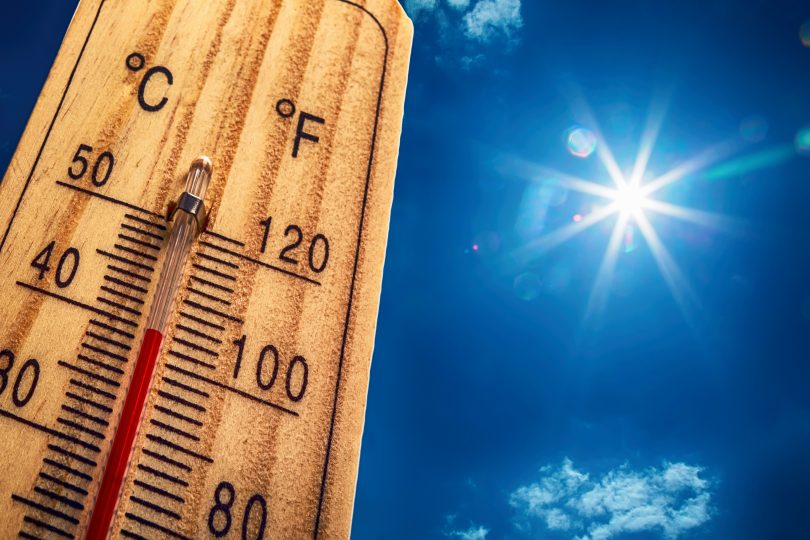 It’s time to turn up the heat on our federal politicians.

There is no denying it – last week was hot. Canberra joined many other Australian cities in sweltering through record-breaking temperatures. Throughout the week, we saw an unprecedented run of 40-degree-plus temperatures, and temperature ranges well above the norm.

This put our health, our utilities, and other services under great stress. It also echoes what many scientists have been trying to drive home ad nauseam and what a growing number of community members are now subscribing to: we have a climate crisis on our hands. And all the while, our current federal government bickers about whether or not climate change even exists and donations from the fossil fuel industry pour into the major political parties.

The latest State of the Climate Report was released by CSIRO and the Bureau of Meteorology late last year. It mapped the shocking rate of change that is happening to our climate – locally and across Australia. It explores the local impact that other research such as those conducted by the International Panel on Climate Change has highlighted globally. While we are told that it is impossible to link a single extreme weather event with climate change, trends are a different story. 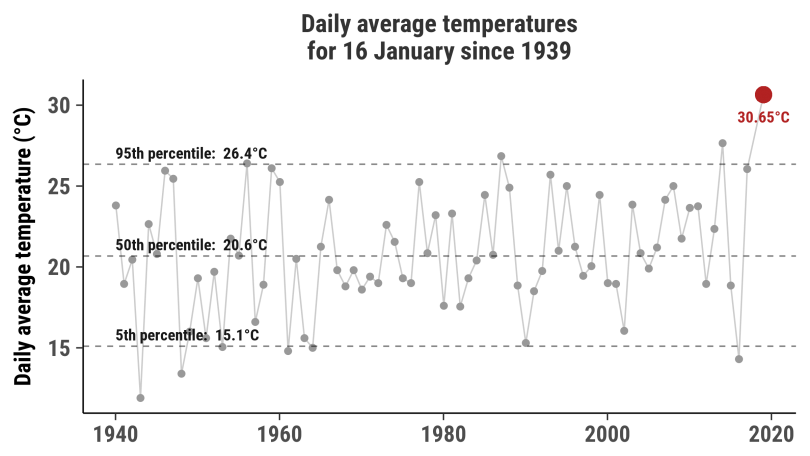 The State of the Climate Report not only provides evidence to the reality of climate change, but also how quickly it is happening. While we probably should have expected it, the report makes for some shocking reading. It lays bare the reality that the climate is indeed changing, and rapidly at that.

We have long known that temperatures are rising. This report identifies that four of the last five hottest summers in Australia have been in the last five years. This report also maps changes over time and identifies an increase in more extreme heat events. This is particularly concerning with regard to human health. Extreme heat events put stress on all our health, but it is the sick, the young, the old and the poor that are most likely to be at high risk. It is startling to consider the World Health Organisation’s prediction that we are likely to see around 250,000 additional deaths each year between 2030 and 2050 due to climate change. 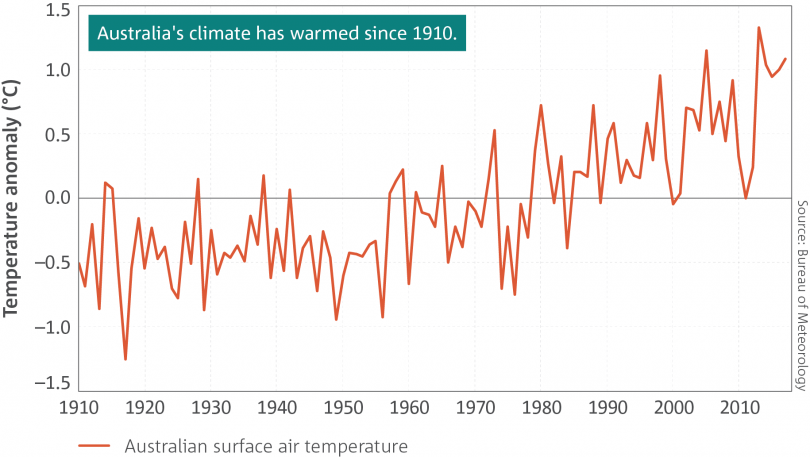 Australia’s surface temperature from 1910 (reproduced from the State of the Climate Report).

The fire emergency that Canberra faced in early November 2018 caught many by surprise, given it was so early in the summer. The report demonstrates that this is not a one-off. It shows Canberra is in the middle of a region that since the 1950s has seen an increase in high fire risk events. While it’s not as bad as our neighbours out west, it does suggest, however, that long bushfire seasons are a reality for our future. This has huge impacts, including less time to undertake bushfire risk mitigation strategies and even putting pressure on the current practice of international sharing of people and equipment.

Does it feel like it rains less? Guess what – it does. The ACT is part of a region that, between the April to October period, saw the lowest rainfalls on record. Thankfully between October and April, the pattern has remained fairly stable. Over this period, northern parts of Australia has seen higher-than-average rainfall. 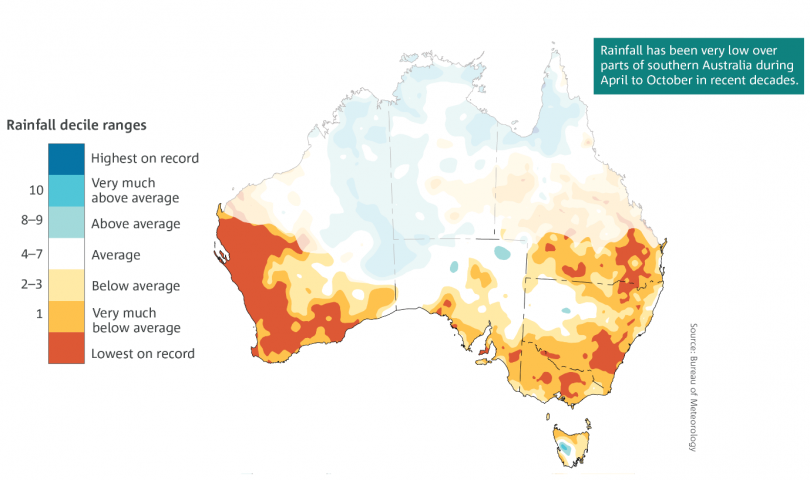 Rainfall patterns between April and October (reproduced from the State of the Climate Report).

It is now very clear that with accelerating climate change, we are running out of time. Indeed, the International Panel on Climate Change suggested we only have 12 years to get our act together. 12 years. That is four federal elections. It is clear that we can’t waste another decade. We need to stop vested fossil fuel interests putting the climate in peril.

The ACT Government is making an effort to respond to climate change including ambitious renewable energy targets and emission reduction strategies. The impact of this local action is limited however without national and global action. And while much is out of our control, the impacts are already being felt.

We need action at the national level. I think that this next federal election must be one where action on climate change is central. We need to come together as a community to demand that whoever leads us is committed to real action.

What action do you want to see your local candidates make to protect the climate this election?

Rebecca Vassarotti is an active member of the ACT Greens. She was a candidate in the 2016 Territory election.

Politicians on all sides have to accept the science. My grandchildren’s future depends on it.

Let’s have new planning rules which include
greater setbacks than are currently being approved to provide more substantial deciduous shade street trees to be planted.
More deciduous trees in all public landscapes.
Mandate for better choice of materials in construction with solar orientation and sufficient soft landscape to be assessed before DA or BA approval given.

Mandate at least one shade tree in people’s gardens(based on scale from a set choice)
Compulsory insulation, affordable cooling and heating in both govt and private rentals.
Green walls and roofs on all new buildings
Water sensative urban design everywhere
Road layouts which don’t increase water runoff.
Proper oversight of the construction industry.

I could go on forever

This wish list does not come cheap! Who has to pay for it all? Some of I have already and paid for it and am being repaid by the savings that are generated from having an energy efficient house and many trees in my garden (I live on a very large – almost 2000 square metres block with large tank storage capacity – nearly 35,000 litres). I also have solar power. None of this comes cheaply.

Alan Sargeant yes I know, but perhaps if we prioritised these things with tax incentives, means tested grants etc it could help. Of course knowing your helping rather than hindering plus having a garden, with shade & cool in summer and seasonal changes & birds visiting is actually all very good for better mental health.

Strong political action is needed in all spheres if realistic action is to be taken. It is a case of per capita (Australian contribution) and absolute levels of emissions (US and China plus others) needing addressing. Change in Australia will come at the cost of living standards as will change in other countries. If the big absolute contributors are not prepared to pay the price and I have serious doubts about both the US and China then any Australian contribution will be a drop in the bucket.

There is no point in phasing out high quality Australian coal production if the replacement is low quality coal with even high levels of emissions. This is an issue not raised by any who are seeking the end of coal mining in Australia.

How about not cutting down all the trees, and greening up the Molonglo Valley? It is a dust bowl. New subdivisions must have more planting for the proven cooling effect.

The greens to at last come up with serious energy efficiency and natural comfort building and orientations standards. And, give up the ‘we HATE CARS!’ c#$p.

Thank you for pointing out another example of extremes in climate that are occurring worldwide.

I was unaware of this event but it certainly seems to be part of the pattern of worldwide climate change.

The whole situation is very concerning, particularly as there are still many politicians out there who refuse to believe the many dozens of expert peer-reviewed, data verifiable studies that have been consistent for over a quarter of a century, and instead chose to rely on their own feelings and some discredited blogs. Talk about out of touch with reality!

The purpose of the link I posted was to provide some visual relief for the hot weather we are experiencing.

The freezing over of Niagara Falls is not an “extreme climate event” as you have suggested. In fact, they freeze over almost every year, something that you admit to not being aware of.

Likewise the hot weather and drought we are experiencing now in Australia is not an “extreme event”. More it is a regular occurrence throughout our brief 200 history.

Like 25 years of the many dozens of expert peer-reviewed, data verifiable studies, one swallow does not make a summer and thankfully we have some politicians the can accept this.

The image of the grass fire with wind generators in the foreground has what relevance to climate change?

“We need action at the national level”

This is not wholly correct, we need action at an international level. Literally anything done by Australia without meaningful international agreements will achieve nothing.

“What action do you want to see your local candidates make to protect the climate this election?”

To stop the constant virtue signalling and use of emotional platitudes on the issue?

To focus on promoting a more structured and cohesive energy market to make investment decisions easier.

To realise that fossil fuels will still form the backbone of our energy generation for a least a few decades yet as we transition to newer technologies and older plants are decommissioned.

We do indeed need action at an international level. For a long time I’ve thought we need to be a world leader in emissions reduction, but only by enough to use as a lever in discussions with other nations to get them to increase their efforts. We could bankrupt ourselves getting our carbon emissions to zero, but at the end of the day of the rest of the world doesn’t do enough we’ll still see the full effects of warming.

Garfield,
I’d promote us enacting enforceable emissions targets that cut in whenever global agreements are signed.

That way, we show we’re serious and begin to move to significantly lowering emissions but we make our full actions reliant on getting other countries to act which is the only thing that will make measurable changes to the climate outcome.

Accessible solar for all homes and businesses including double glazed windows being standard building code. Plant more trees goes without saying. Less burn-offs and more manicured urban parks. They are terribly kept and a fire hazard, not mention an eyesore. Umbagong District Park is a great example…
PS where is the lighting at night? It’s absolute darkness…
Super slim Green towers acting as trees in CBD’s would be a bonus…
Oh and a heated state-of-the-art wave pool – Canberra’s very own beach 🏝 in the city. Like Brisbane’s Southbank Lagoon on steroids. That’s high priority for our warm / hot 🥵 climate half of the year. Maybe partnerships with Big Splash Waterpark for serious park expansion to make this a reality?