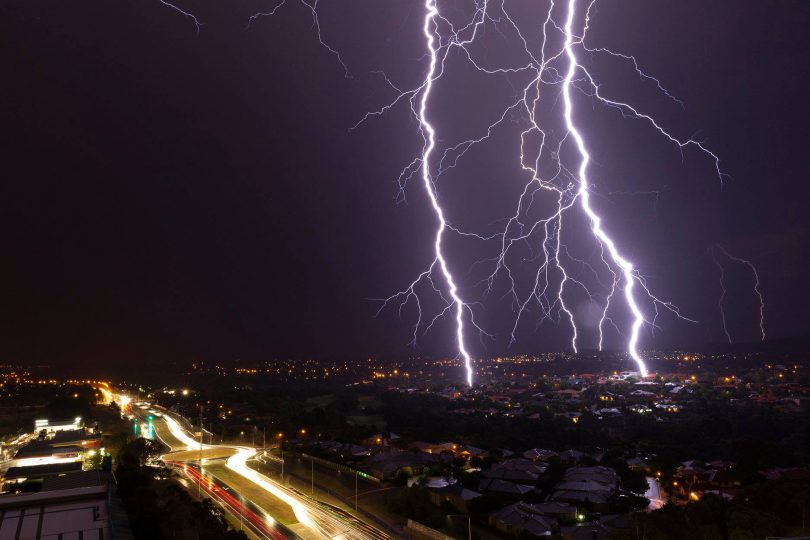 The overnight storm brought some welcome rain but little relief from the heat. Photo: Living Media.

The ACT sweltered through a record-breaking fourth day of 40-degree temperatures today, with the mercury hitting 40.1 at 3.41pm.

Duty forecaster at the Bureau of Meteorology Rebecca Farr said earlier in the day that if the ACT reached the forecast top of 40 degrees today, it would be the first time there had been four days in a row with maximums of 40 degrees or more.

Overnight an overnight storm brought some welcome rain but little relief from the heat. Ms Farr said severe storms were again forecast tonight but this time a weak southerly change would bring some respite over the weekend before temperatures again climbed back to ‘low-intensity heat wave’ levels by mid-week.

She said a high-pressure system over the Tasman Sea had been holding in place an inland trough drawing down hot, dry air from the north, and blocking any cold front that might provide relief.

“The storms are forming along that trough sitting inland. The air mass that the storms are coming from is so warm and generally dry that that sense of relief you often get from storms isn’t there so much,” she said.

The overnight minimum was an uncomfortable 21 degrees, and while weekend temperatures will be relatively cooler at 33 degrees and sub-20 minimums, by Tuesday the ACT will be back to 36 degrees and warm nights.

Last night’s storm brought 11mm of rain to Canberra and power outages across the region, and the forecast for more storms also brings the threat of lightning strikes igniting fires.

The ACT and surrounding NSW is again under a Total Fire Ban, with the fire rating upgraded to Severe.

Ms Farr said the weather pattern was not expecting to change significantly over the next week, and the long-term outlook for February to April remained hot and dry.

For tips on how to stay cool and safe in the hot weather visit the ACT Health website.

Timely comments today about the need for restraint in water use are a reminder that we may not be as “drought proof” as was thought even a few years ago. Unlike the large coastal cities, a desalination plant is not a realistic option for Canberra.