Comic Book to Raise over $15,000 for bushfire charities 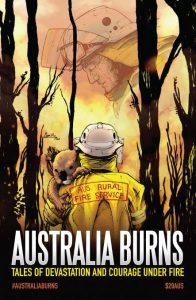 Following the great success of the Fire Fight concert, another group of artists from a different field are putting their talents to work raising money for charity.

AUSTRALIA BURNS: TALES OF DEVASTATION AND COURAGE UNDER FIRE is a 100-page full-colour comic book anthology featuring 66 creators from Australia and beyond. The book is only $20 and 100 per cent of the proceeds will go directly to charities related to bushfire recovery.

Published by Victorian Darren Close through OzComics, inspired by an idea from Queanbeyan comics writer Big Tim Stiles, the project has grown beyond expectations and has already secured more than $15,000 for charities in pre-orders.

The book is being printed by Jeffries Printing in Sydney and launched Australia-wide in March.

The Canberra launch will be at 6:00 pm on Wednesday, 11 March at Impact Comics. The ACT RFS will be coming along to help raise awareness of the book and thank anyone who has scored a copy.

Other launches planned are: 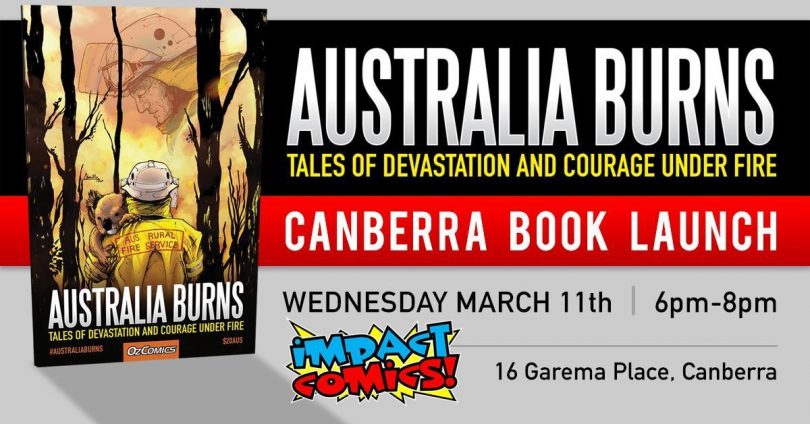 All proceeds from the sale of Australia Burns will be donated to bushfire-related charities. Image: Supplied.

Like so many Australians, the creators on this book were personally touched by the fires. During the making of the book, Big Tim was evacuated from his home and Jon Sommariva was on watch at his father’s home in Banks as the fires came over Mount Tennant.

Local Canberra writers Ryan K Lindsay and Shane W Smith both contributed work, with Ryan capturing the power of a parent putting on a brave face in front of their kids, and Shane recounting discussions with a firefighter.

The comics include true accounts as well as fictional stories that try to capture the varied experiences of the bushfires. Some are gut-wrenching drama, some are spectacular fantasy.

Mal was struck by an account from a friend in the Wingello RFS of the night the fires ripped into the tiny Southern Highlands town. “I tried to capture the selfless courage of the volunteers, and the helpless fear that their families feel waiting for them.”

The Australia Burns Anthology is available for pre-order now.

All proceeds will go to:

It’s closer to $17,000 now thanks to the weekend launch in Melbourne. It’s an amazing book.