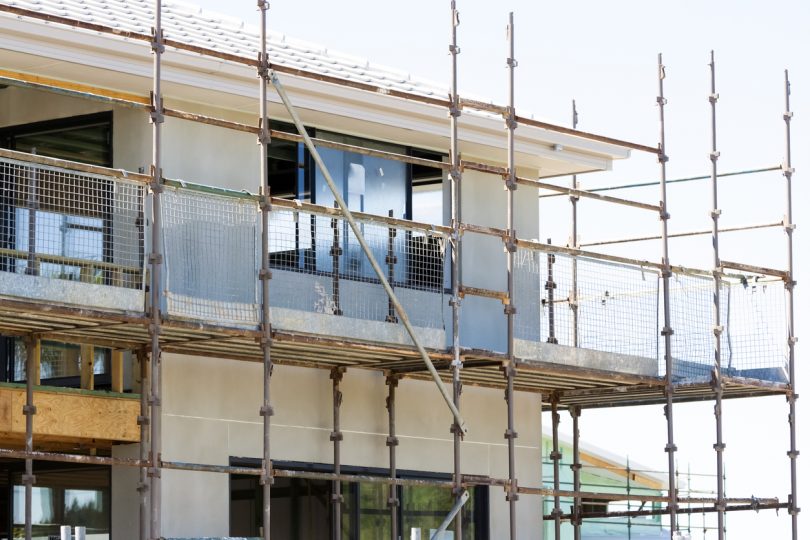 The ACT’s construction industry is on notice after an audit found serious safety concerns in scaffolding on both commercial and residential sites.

Insufficient fall protection, a lack of safe entry and exits and incorrectly installed ladders and stairs on construction scaffolding are some of the key safety concerns identified by the WorkSafe ACT audit.

He said the concerns identified through the audit were troubling, with total compliance levels varying from 58 per cent to 89 per cent.

While issues on commercial sites were able to be quickly rectified, WorkSafe ACT had issued three Prohibition Notices and three Improvement Notices in the residential sector during the audit.

As well as continuing to check scaffolding as part of its regular site inspections, WorkSafe ACT would also conduct a follow-up audit to check on compliance.

WorkSafe ACT will be further engaging with the Housing Industry Association, Masters Builders ACT, union representatives and other key stakeholders to reinforce safety requirements and emphasise the need for compliance but Mr Jones said that where repeat breaches or ongoing compliance issues were identified, regulatory action would be taken.

“We found in the commercial sites we checked that only one out of five scaffolds were compliant with respect to access openings,” Mr Jones said.

“It was troubling that most of the commercial scaffolds were not compliant in this area.”

In the residential sector, inspectors found instances of incomplete scaffolding with key elements of the structure missing and also a lack of fall protection.

“Falls from a height can cause catastrophic injury to workers and it is important that scaffolding on every site is not only installed correctly but regularly checked and maintained,” Mr Jones said.

“There have been more than 470 claims for workers compensation lodged in the ACT relating to falls from heights since 2014 and a number of significant incidents have been investigated by WorkSafe ACT.”

Mr Jones said many of these incidents could have been prevented and scaffolding safety needed to remain a key priority.

The audit report can be found here.

Paul Leins - 18 minutes ago
Chinmoy Misra so you're saying *you* can't maintain a reasonable speed in built up areas without some kind of ridiculous urba... View
Jeff Shapiro - 35 minutes ago
Ken Owers you need an idrive adapter or buy a Mercedes View
Chinmoy Misra - 45 minutes ago
Paul Leins Congratulations. You missed the point entirely.... View
Community 28

assiduous - 57 minutes ago
A scheme like this is akin to rearranging the deck chairs on the titanic, as opposed to meaningful reforms, planning and infr... View
Ann-Maree Jacobs - 2 hours ago
Four tries every time The site is down ! View
Lisa Hogan - 11 hours ago
Agreed. The current scheme only benefits those with the disposable income to buy stuff. So another 'discount' for the rich. A... View
Community 4

chewy14 - 2 hours ago
Astro, I've literally explained what type of campaign i'm describing. A political one designed to make the opposition to the... View
Diana Napier - 3 hours ago
It's not a museum. That's the point what they are building is a ballroom for men who never had one.... View
News 9

HiddenDragon - 2 hours ago
Canberrans (particularly those without the income of a professor or an MLA) who are still absorbing the recent news about a b... View
jwinston - 2 hours ago
Jeez Chewy - I never picked you as a Tim Flannery fan boy? View
Capital Retro - 2 hours ago
Nothing new in that advertorial but it's great to see one side bagging the hydrogen lobby. Our virtual signalling government... View
News 66

Alicia Conley - 4 hours ago
Liberals on a local level people. Get them in... View
Opinion 37

Timothy Bailey - 5 hours ago
The AWM and "ANZAC" are very powerful icons. Difficult to argue with or question. The whole 'Beersheba - last great cavalry c... View
BlowMeDown - 11 hours ago
I think you've just summarised the Labor/Greens strategy re promoting light rail by derailing, as they did, the bus system in... View
News 1

ChrisinTurner - 7 hours ago
I had to look up stealthing on Google. Seems to have changed the whole intent of the word "stealth". The mind boggles with th... View
News 41

JC - 11 hours ago
There is a partial element of truth in it, but only if you draw a very long now. ACTEWAGL is 50/50 owned by Icon Water and Je... View
show more show less
*Results are based on activity within last 7 days

It's higher off the ground than any of its rivals. It has an all-wheel-drive system and driving modes for deep...
Community 28

@The_RiotACT @The_RiotACT
Gungahlin is often seen as the new part of Canberra, but some locals have lived their whole lives there. The town centre is already big and it's still growing https://t.co/Kqq2xR1Mmm (14 minutes ago)

@The_RiotACT @The_RiotACT
Opposition Leader Elizabeth Lee said she has received "a huge amount of interest" for her stealthing bill, which she says is a positive first step to raising awareness about "the existence of such a heinous practice" https://t.co/YQDtFOWLYU (2 hours ago)