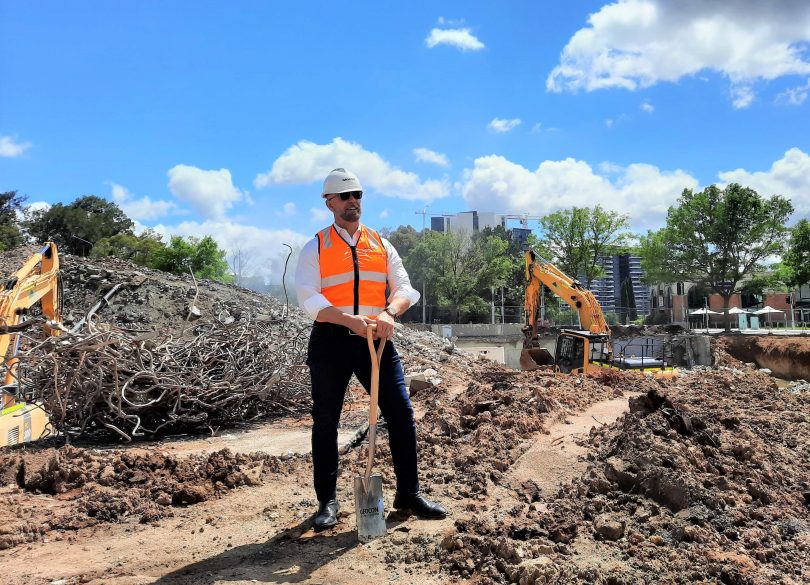 Geocon managing director Nick Georgalis on the WOVA site, where demolition of the Woden Tradies buildings has been proceeding. Photo: Ian Bushnell.

Canberra will face a massive housing crisis next year as migration picks up again and international students return, according to the ACT’s biggest developer.

Geocon managing director Nick Georgalis said he had always argued that the Canberra market suffered from an undersupply of housing, resulting in the nation’s highest rents and, in combination with record low-interest rates, “mindboggling” rises in house prices this year.

Mr Georgalis believes that there will be nowhere near enough supply in the market to meet demand when Australia returns to its regular settings after nearly two years of COVID-19 restrictions and border closures. 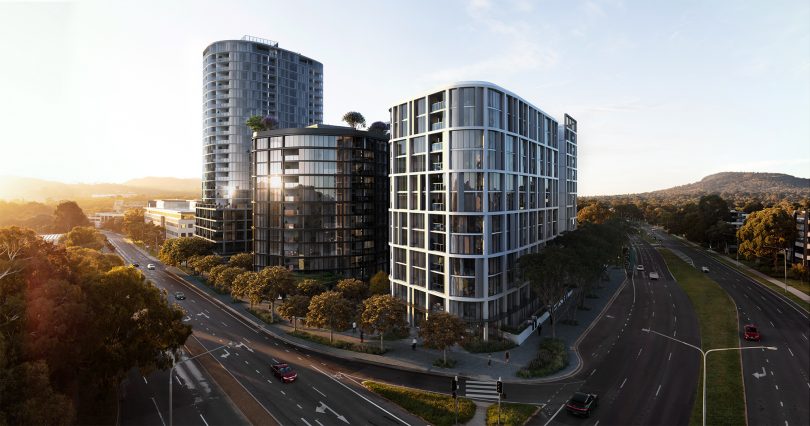 An artist’s impression of the WOVA development on the corner of Melrose Drive and Launceston Street. Images: Fender Katsalidis.

Mr Georgalis was speaking at the sod-turning on Monday (8 November) for the massive 800-unit, four-tower WOVA development in the Woden Town Centre, which has been swamped by buyers – split 50:50 between investors and owner-occupiers.

Mr Georgalis said the first residents should be able to move in by mid-2023, with apartments selling from $330,000.

He said investors who had reportedly departed the market earlier in the year recognised the housing demand that Canberra will face next year and were buying into the market in droves. 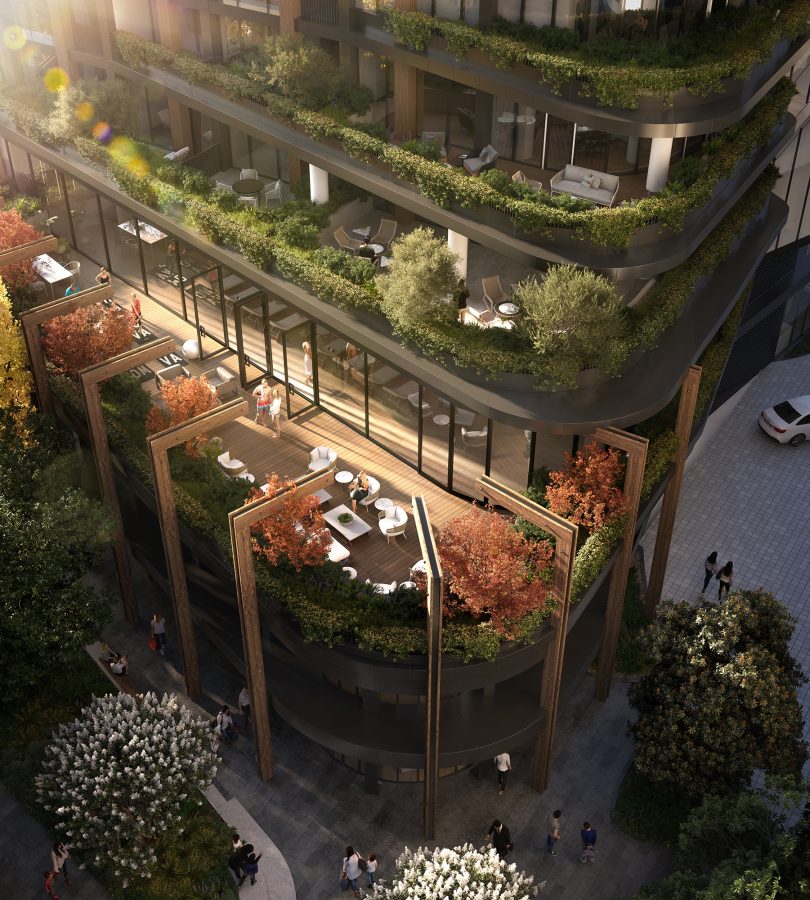 WOVA is a five-star green development with gardens and terraces.

With few suburban properties selling for less than a million dollars in a runaway market, Mr Georgalis said the mega-developments such as Republic in Belconnen and WOVA offered the scale to keep prices affordable.

“One of the challenges of what we’ve seen initially with the smaller 100-200 unit developments is that you don’t have that sheer volume to spread the costs over all the apartments,” he said.

The project has had several iterations as it progressed through the approvals process and has faced criticism from community groups, but Mr Georgalis rejected any notion that these mega-developments were inappropriate or ran the risk of turning town centres into concrete jungles.

“I don’t think anyone should drive an agenda to take a home away from another person,” he said.

“The notion that you should not have it in a town centre, and not provide access to affordability for a young person is an appalling idea.”

He said town centres near public transport routes were ideal for such developments, offering first-home buyers the opportunity to break into the market.

“The idea that it’s going to be a concrete jungle are appalling words from a community,” Mr Georgalis said. “There’s a lot of green spaces, ovals, the Centennial Trail that walks right past, you have access to some of the greenest and most interesting parts of Canberra right near you.” 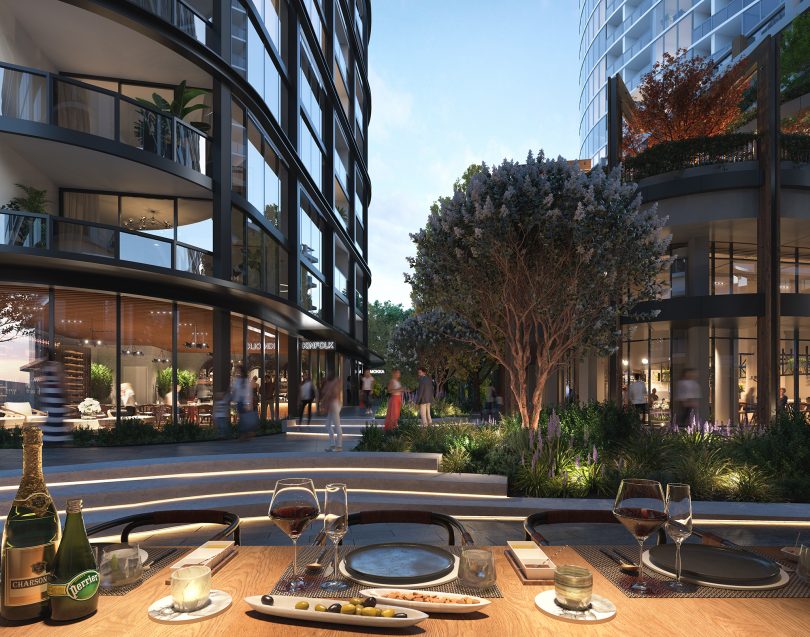 The view from WOVA ground level: treed laneways and hospitality and retail outlets.

Mr Georgalis said amenity was important in all Geocon developments because buyers were pursuing a lifestyle as well as a home.

“On this particular project, we’ve got amenity up to four levels – cinema, function and dining rooms, wine cellar, sauna, spa, pool, meeting rooms, co-working areas – we’ve got all of that,” he said.

“So it is a pivotal part of anywhere one wants to live, especially when they’re such high-volume developments.”

The $232 million development on the former Woden Tradies site has been designed by Fender Katsalidis, while Oculus is preparing the gardens and landscaped areas.

The precinct will include 22 commercial units, including retail and hospitality, and an Abode hotel.

READ ALSO Strong community support for raising the age of criminal responsibility, although police say 14 is too high

Woden Town Centre is in the midst of a high-rise boom, with Geocon one of a number of developers building mixed-use residential towers that will add thousands of residents to the area.

Geocon’s Republic Precinct at Belconnen consists of five buildings and 1200 apartments, with the final stage to be finished in the first quarter of 2022.

Mr Georgalis said the company had just enjoyed the best three months in its history, apart from the ACT Government dropping it from the Kingston Arts Precinct project.

But Mr Georgalis would not be drawn on the government’s decision to cancel the contract, which is the subject of ongoing commercial negotiations.

As a owner of a GEOCON built unit, I don’t understand why your journalists continue to cover this developer. If you ask anyone in Canberra, you will understand the appalling reputation this company has with regard to misleading off plan buyers with their marketing spin. I love my apartment, but when it comes to common areas and amentities , as highlighted in the marketing, many amenities never eventuate, or they are substantially less than the marketing portrays. By all means, buy a completed GEOCON apartment as long as you can physically inspect and see the amenities for yourself. But when it comes to buying OFF PLAN – I will never make that mistake again, with this developer. If they only cthis company could adopt a higher level of integrity and ethics. Current court action instigated by the ACT Fair Trading Commission may help.

Investors “buying into the market in droves.” There lies the rub. The ACT government survives on revenue from land sales. There is limit and instability associated with construction. The ACT government needs to focus on creating permanent jobs and industries to diversify the economy and make employment and opportunities in Diverse and inspiring industries such as biotech and manufacturing. The ACT Government is very dependent on 1) Public Servants2) Tertiary education 3) Construction based on a false investor growth mindset.
It does not have to be this way many European countries can maintain their heritage and environment as they have limited development need with little population growth because they have secure industry and production such as Switzerland, Austria, Denmark most of Scandinavia etc. Canberran’s need other employment options and the government needs to reset the false sustainable growth mantra. The continuous development and consumption cycle by developers and investors is not conducive to community wellbeing and a stable society.

Capital Retro – Spot on. Unfortunately Mr Georgalis only sees how much he can make money and doesn’t care about Canberra or the community. Why does he not get that people do not want to live in little boxes, they want space and a backyard.

The developer lobby wants to “keep prices affordable” “as migration picks up again” for Big Australia Mark II. Too easy.

Whichever party wins Election 2022, developers have won. They know planned net migration jumps to record levels of 235,000 a year. Works for them, and for “GDP growth”. No say for voters.

Why is it that I don’t agree with anything he says?

You are so right.