DIY wotz on guide for the weekend of 2 September 2011 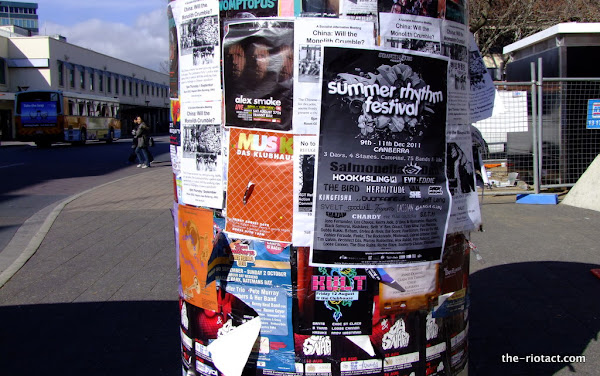 A huge weekend of spring awesomeness is upon us.

What’s worth seeing and doing around town in your opinion?

Really peeved I was not aware of this until now, why is event promotion so crap in this city.

Just sign up to the Ticketek (who handles the Royal Theatre) and Canberra Theatre newsletters, or any of the other venues. Then you usually get access to pre-sales when these events are announced. (Although for Ticketek and Ticketmaster you will be notified of all the Sydney gigs since NSW/ACT is one region.)

Always, always ALWAYS rock up to the venue on the night, even if told that the ticket allocation has been exhausted. 9 times out of 10 the promoter will release additional tickets on the night – these are sold through the box office. Box office staff are only ever told at the last minute if there’s spare tickets, and these are usually great seats (artist or promoter allocation not used so ‘given back’ for sale).

Really peeved I was not aware of this until now, why is event promotion so crap in this city. For example, Ross Noble is coming back next year, I haven’t seen it advertised anywhere…mind you I have front row seats again as I bought mine about 10 mins after he posted the announcement on Twitter. The only promotion I saw for Chris Cornell was a few posters. I actively seek out things to go to, but still miss stuff. How many people miss out completely. I might start posting event up as I discover them.

WEEK ONE SHOWS- ONLY FRIDAY AND SATURDAY NIGHT TO GO!!!

Short + Sweet (the biggest little play festival in the world) at the Courtyard Studio, Canberra Theatre!
The festival comprises of 10 minute plays- directed by and starring Canberrans, and featuring both local, national and international writers. The plays run over two weeks from Wednesday 31 August- Saturday 10 September,.

Tickets can be purchased at http://www.canberratheatrecentre.com.au/what-is-on/event-details.aspx?eventID=7292 or on the door

Monday night bootlegs at the Phoenix has an amazing lineup:

Fash ‘n’ Treasure is on again … lots of new and pre-loved designer clothing for the ladies. Saturday from 10am at the Old Bus Depot, Kingston. http://www.fashntreasure.com.au

Dylan Moran’s legendary stand up rants have sold out across the world, cementing this unkempt wordsmith’s reputation as one of the foremost comics of his generation.

Likened to Dave Allen and labelled ‘The Oscar Wilde of comedy’ Dylan is unpredictable, bizarre, elegiac, often cruel but above all painfully funny. Moran sees through the joys and disappointments of human existence with the sensibility and intense perception of a man teetering on the edge. He chews life up and coughs it out…

It’s an intimate venue with limited seating so you’ll have to get your skates on.

http://luciethorne.com/
And here for an interview with Lucie Thorne on the new album and the gig: http://soundcloud.com/overheard-productions/lucie-thorne-talking-about-new

Corunna Farm at Corunna is one of those rare properties which represents a generational opportunity for a landmark holding on the...
Property 21