DIY wotz on guide for the weekend of 9 September 2011 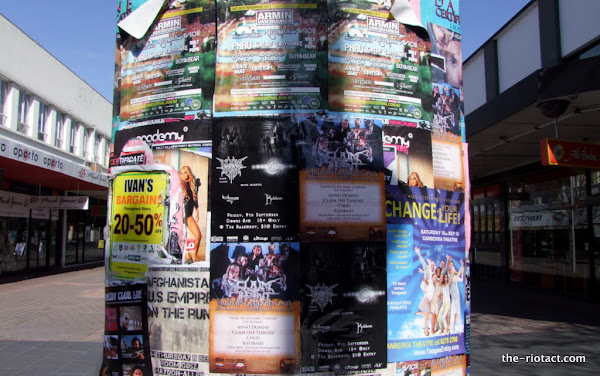 The weekend is once more upon us; so what should we be seeing and doing with the spare time?

If you know about something cool let us know in the comments.

http://www.weejaspercaves.com/crystalclearconcerts.html
Essential to let them know if you’re coming due to limited numbers

THEN if you still want a musical experience in the region:

Join The Resonants Choir for some wonderful singing of folk and popular songs, as well as some new works by young Canberra composer, Louise Underwood.

The concert will be held on Saturday 10 September 7:30pm at The Hall, University House, 18 Balmain Crescent, Australian National University.

Tickets are available from The Resonants website http://www.resonants.org.au, choir members, or at the door.

Drinks will be available for purchase prior to the concert in The Hall foyer.

We would love to see you!

*GIVEAWAYS/PRIZES/LUCKY DIP + EVERY PAYER WILL RECEIVE A FREE CD*

Lock your cellars and conceal your wenches! The wayward, ale swigging Australian warriors CLAIM THE THRONE are set to ransack taverns far and wide declaring rebellion this August and September with TRIUMPH AND BEYOND Australian and New Zealand Raid!

Having built an awe-inspiring reputation for outrageous live performances, Claim The Throne spearheaded folk metal in Australia and will be ripping through the nation, rupturing the seedy underbelly of the east coast in their wake.

With a newly refined line-up in 2010, TRIUMPH AND BEYOND reveals the band at their peak, with 12 tracks of fearless victory and its festive aftermath.

Accompanied by the unassailable demonic sound of Canberra favourites, Anno Domini; with their signature blend of death, black and symphonic metal.

Join Claim The Throne on September 9 2011, at the Capital’s chief metal establishment, complemented by the chainsaw edge of Canberra’s CHUD and atmospheric insurgents, Katabasis. …..prepare to be leveled!

The John I Dent (local rugby union comp) grand final is on at Viking Park in Tuggeranong on Saturday afternoon, first grade kick off at 3:15.

Wests V Tuggeranong, for all you union fans out there it should be a great game.

ACT Gridiron have an action packed day planned at the Greenway Enclosed Oval on Saturday 10 September. Three games are being played, the first kicking off at 10.00am between the improving Gunghalin Wildcats and the (as yet) winless and hungry Centurions.

The second game kicks off at 12.45pm between the Astros, who are riding high after their first win, and the always entertaining Tuggeranong Tornadoes.

Finally the much anticipated 2010 Capital Bowl rematch between the Gladiators and UC Firebirds will kick off at 3.30pm. Both teams are undefeated this year – and recent games would indicate this will be a real humdinger with heaps to offer on the offence and some big hits from the D.

Free entry and the canteen will be open all day. Come along and support your community by being part of a growing amatuer sport. More info at http://www.actgridiron.asn.au

Women of Notes is on at Transit tonight!

Daniel Duncan - 3 hours ago
Another reason to vote Barr and his crony's out. View
Rainer Busacker - 4 hours ago
Steve Wood "Gunna-Do-Barr" sprooks a lot of things, especially now just before an election. When and if ever will he actually... View
Opinion 31