Canberra’s strengthening economy, prudent fiscal management and a bit of good luck have enabled the ACT Government to improve the expected budget deficit by $246 million this year.

A combination of waning fiscal restraint by the Commonwealth, a broader revenue base due to more diversified economy and some strategic pre-election budget management have resulted in the improved outlook and a lowered the territory’s net debt.

The headline net operating deficit is expected to be $232.5 million in 2015-16, an improved projection from the $478.6 million deficit expected at the December Budget Review.

In 2016-17, the deficit projection of $181 million represents a $59.3 million deterioration compared to the last Budget estimate because the government has pre-empted an upcoming $87.7 million hit from lower interest rates (when government bond yields fall, as they are now, the Government’s superannuation liability rises). Without this provision, the headline net operating deficit would have been a much better $94.4 million. It also conveniently allows the Government to avoid that liability showing up, for the first time, in the pre-election fiscal outlook document: never a good look during an election campaign. Broadly balanced budgets are expected for 2017-18 and 2018-19 and a $66 million surplus is projected in 2019-20.

The continuation of the tax reform process that started in 2012-13 has lowered tax revenue estimates by $7.5 million in 2016-17. Through this 20 year process, conveyance and insurance duties are being replaced by higher general rates while payroll tax is also being lowered. In this budget, with updated data (and an election coming up) the government has decided to soften its planned rate of general rates increases.

The ACT economy’s better than expected performance and a higher GST grant from the Commonwealth has assisted the revenue projections. Higher than expected sales and prices lifted commercial conveyance duty. The economic growth forecasts for the territory have been lifted by quarter of a percentage point in both 2015-16 and 2017-18. Employment growth forecasts have also been raised in 2015-16 and 2016-17. 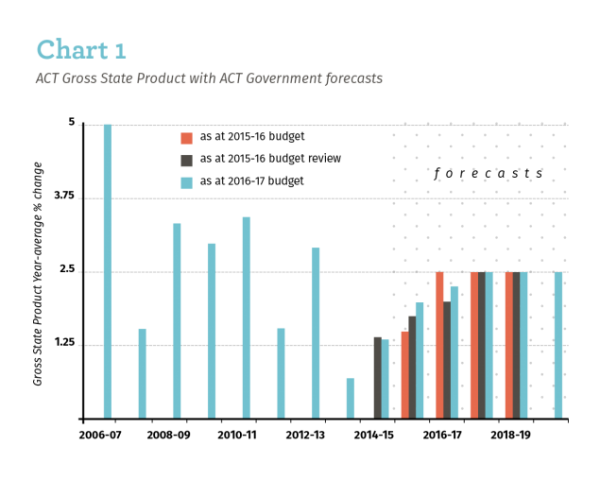 “This Budget though represents the culmination of four years of work to keep the ACT economy growing,” Mr Barr said.

“This means a revenue stream that allows us to invest in those important community services”.

The Government’s decision to splash a bit of its surprise revenue has lifted expenses by $110.5 million in 2016-17, with most of that expenditure devoted to health, concessions, public housing and the safer families initiative.

As a result of the slightly improved operating budget and the removal of the provision for stage one of the Light Rail PPP (this had been included as a debt-funded capital project in the 2015-16 budget) net debt has been reduced in the near term. But a large part of this is reversed in 2018-19 when the lease liabilities associated with the PPPs pushes debt back up. But even at its peak in 2018-19, net debt $4.6 billion (around 11.3% of GSP) is below the 12.3% projected peak in the 2015-16 budget. 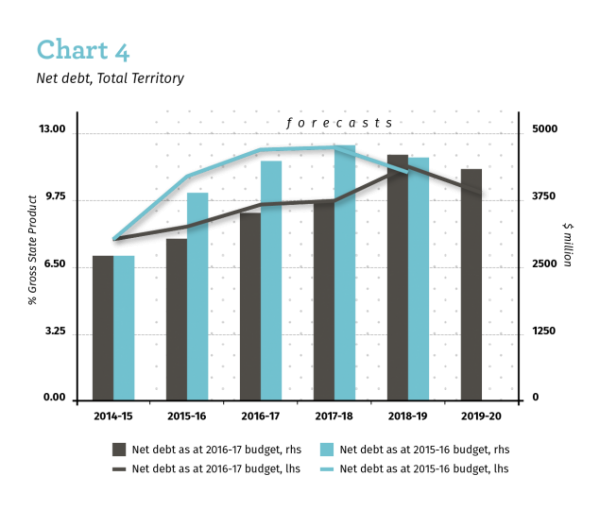 The chief minister said the implications for the territory’s triple A credit rating are likely to be minimal. “This puts us in a very sound position to retain the highest possible credit rating,” Mr Barr said.

Cherelle, you’ve got a background in economics. Do you actually believe any of the forecasts Barr gave in this budget? Considering how inaccurate his previous ones have all been, it seems to me like a total load – especially when you consider that nearly all the good news is in the forecasting, and not the reality of the current financial situation.

Jacq Miller - 6 hours ago
shame there are no longer all 4 in situ View
Barry Matson - 8 hours ago
of what? View
Michael Guina - 9 hours ago
It has to start somewhere and those two buildings are living example . View
Opinion 80

HiddenDragon - 10 hours ago
Some cautionary words here about the limits of battery technology - https://www.abc.net.au/news/2021-02-16/bill-gates-zero-em... View
dulynoted - 13 hours ago
those statistics might be outdated; renewables are getting cheaper and more energy efficient every year as technology improve... View
Capital Retro - 15 hours ago
In which way isn't nuclear power profitable? It depends on which experts you are talking too: https://www.ceda.com.au/NewsAnd... View
Sport 2

bj_ACT - 20 hours ago
Yes razor it’s a good point. Agree there are pockets of Tuggeranong and Belconnen that could do with some ACT government do... View
mattm - 20 hours ago
There are almost 130 Councils in NSW, and most of them do a much better job with municipal services than the ACT Government.... View
Heavs - 21 hours ago
Competent councils - like this one? https://www.canberratimes.com.au/story/6978805/nsw-central-coast-council-to-be-sacked/ Or... View
Community 1