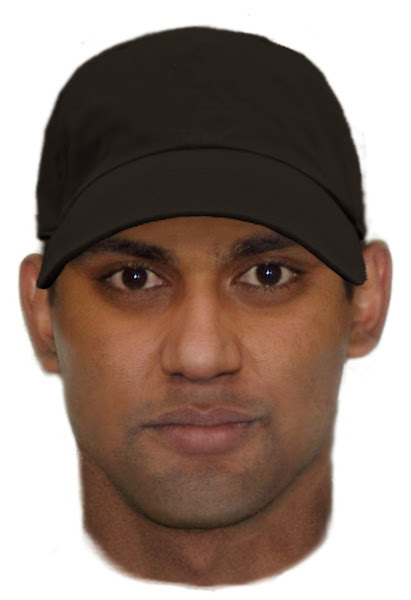 ACT Policing has released a facefit of the offender involved in an incident on Friday May 17 in which a man seriously assaulted a 52-year-old female receptionist and ransacked a professional office looking for cash and drugs.

Police were called to the professional office suites in Grattan Court, Erindale, around 12.40pm after it was reported that a man had entered the office and demanded both drugs and money.

When he was told that neither was held on the premises, he savagely assaulted the office receptionist.

He then ransacked the offices and, finding no cash, stole two cheques and then fled on foot.

The offender is described as of middle-eastern appearance, aged in his mid-20s. He is clean-shaven, about 5’8” (173cm) in height, and with a solid build.

He was wearing a red jumper, and a black baseball cap which had a red-coloured underside. He also had sunglasses on the cap.

Police are urging anyone with information which can assist in identifying the man to contact Crime Stoppers on 1800 333 000, or via www.act.crimestoppers.com.au. Information can be provided anonymously.

The usual moronic response from the resident moron

Actually, it appears that meat cleavers are only necessary if you are born in Essex and educated in the UK.

You’re a total piece of wit, aren’t you?

It’s hard not to be impressed the fact that he was able to keep his sunnies on his head while seriously assaulting someone.

The face of a despicable low life woman basher.Hopefully someone will recognise the POS.

Attacked a 52 year old woman hey. I’d be waiting in the nearest Centrelink queue for him to show up.

chewy14 - 7 hours ago
BJ, You aren't meant to bring these things up. The only information allowed is positive. It's efficient, it's modern, it's vi... View
chewy14 - 9 hours ago
JC We don't need news reports, transport Canberra publish the patronage reports. BJ's figures are accurate. https://www.trans... View
bj_ACT - 9 hours ago
Just for the record, the light rail business case for expected daily patronage was quite low in 2019 and we beat that in the... View
Property 5

Capital Retro - 16 hours ago
".... An emblem showcasing medieval queens, crowns, and castles, doesn’t represent 21st century Canberra..." We have all th... View
Stephen Saunders - 22 hours ago
Symbols do matter. The British monarch is the white hereditary chief of the Church of England. An emblem showcasing medieval... View
HiddenDragon - 1 day ago
"Could the Brindabella Ranges be incorporated into the ACT’s coat of arms,..." An image which combined the mountains and th... View
News 1