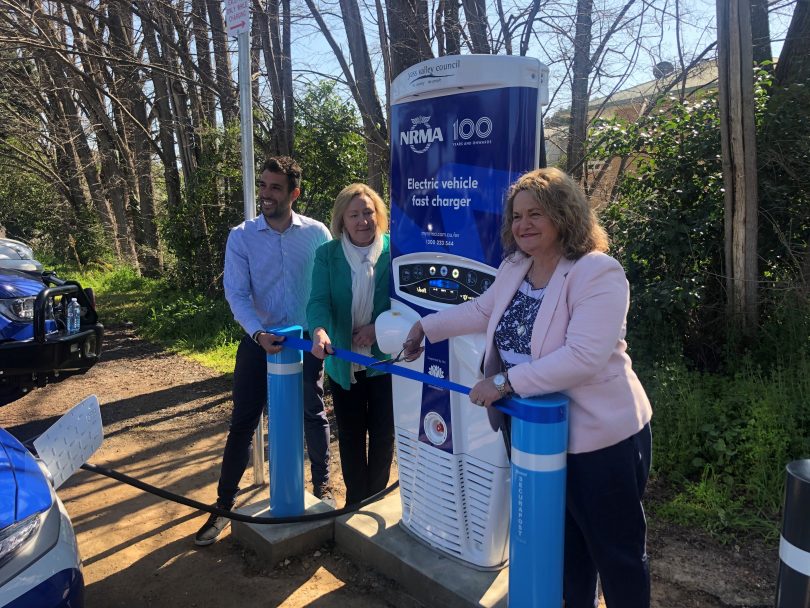 Yass is now on the map for electric vehicle drivers after the universal NRMA fast charger was unveiled in the Meehan Street car park, behind Banjo Paterson Park on Monday, 8 September.

Yass Valley Council hopes the charger will bring additional dollars to the town as people spend money in cafes, restaurants and shops while they charge their vehicles.

The fast charger can recharge two cars at the same time, in about 30 minutes, and is free to use, according to NRMA.

Member for Goulburn Wendy Tuckerman said the charger is the first of 20 that will be funded by a $3 million partnership between the NSW Government and NRMA, and will be delivered within the next two years.

“These charging stations will change the way electric vehicle drivers move around, helping to support tourism in regional centres along the Hume, Newell, Barrier, New England and Kamilaroi highways,” she said.

“We want people to stop off and explore regional towns such as Yass while they charge their electric vehicles.”

“The installation of the Yass electric vehicle charger is a major connection along the Hume Highway and is part of our vision to work with the NSW Government to boost regional travel as well as minimise the anxiety that might come with purchasing an electric vehicle,” he said.

“We believe that with a comprehensive regional fast-charging network, we will see this type of vehicle become an increasingly popular choice.”

An electric vehicle charger in Wagga Wagga is on track to be delivered by the end of September.

If you’re wondering what “on the map for electric vehicle drivers” looks like, here are two tools I recommend everyone curious about EVs should check out (and everyone who has an EV probably already knows about):

Congratulations to NRMA and Yass Valley Council for getting another charging station rolled out for NSW. In a decade or two these will be common place, right now they’re important landmarks.

Daniel O'Connell - 19 minutes ago
Greater costs for electricity to follow, just like the rises currently being arranged due to 100 percent renewables. View
Capital Retro - 3 hours ago
Bill Gates is the world's richest virtue signaler: https://www.cnbc.com/2021/02/14/bill-gates-on-his-carbon-footprint.html Li... View
HiddenDragon - 15 hours ago
Some cautionary words here about the limits of battery technology - https://www.abc.net.au/news/2021-02-16/bill-gates-zero-em... View
Property 1

Katrina Eadie-Bergin - 17 hours ago
Rowan Bergin I very much look forward to it ❤️... View
News 37

Mateo Furbacchione - 17 hours ago
Yup! My cat meets all the criteria. I built him a cat run where he is 100% enclosed. He has a main cage where he can laze in... View
show more show less
*Results are based on activity within last 7 days

@The_RiotACT @The_RiotACT
How long since you've gone out for authentic Mexican food? Mochachos is bringing the heat to Kingston https://t.co/lsjPa6sCey (15 hours ago)