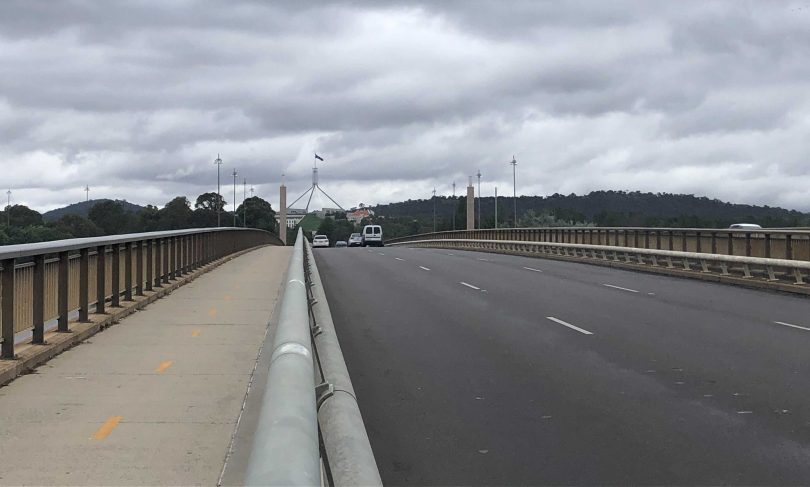 The funding will extend the life of the bridge by 50 years. Photo: Dominic Giannini.

The Federal Government has agreed to provide $137 million in funding to upgrade the iconic but ageing Commonwealth Avenue Bridge.

The funding guarantee will allow the National Capital Authority to proceed with bridge strengthening work to prevent structural damage, widen the pedestrian pathways and replace the vehicle safety barriers to improve road safety.

The upgrade is estimated to add a further 50 years to the life of the key north-south link across Lake Burley Griffin.

Last September the proposal was added to Infrastructure Australia’s list of priority projects, four months after the NCA backed away from a proposal to knock down and replace the bridge, saying it preferred to strengthen and widen it instead.

According to the business case, the bridge, which is taking a growing amount of traffic, including heavy vehicles, needs to be strengthened within five years to reduce the risk of structural damage.

In 2017, an average of 7,320 vehicles per morning peak hour and 6,190 vehicles per afternoon peak hour were crossing the bridge, and there were 3,000 active transport trips in the peak periods. Demand is forecast to grow by more than 25 per cent by 2036.

The business case noted the bridge failed to meet minimum safety requirements in areas such as the safety barriers, the traffic lane widths, the shared pedestrian and cycle path widths, and the accessibility of existing approaches.

The upgrade will be separate from plans for a light rail crossing as part of Stage 2B to Woden, which is going through the various Commonwealth approvals processes.

The ACT Government wants to build the light rail crossing as a third span between the two existing ones. 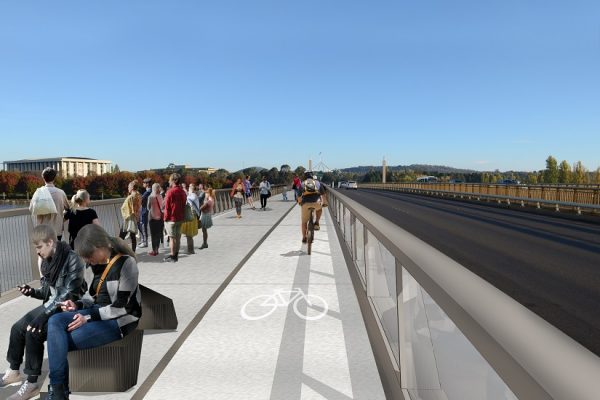 What the wider active travel paths may look like. Image: NCA.

“The upgrade will ensure that the Bridge will continue to operate as a critical piece of our city’s transport infrastructure for decades to come,” he said.

“This project will stimulate our local economy and support the jobs and livelihoods of Canberrans.”

Deputy Prime Minister and Minister for Infrastructure, Transport and Regional Development Michael McCormack said it was a big win for Canberra.

“This investment ensures this important piece of infrastructure can continue to function safely for the next 50 years and beyond,” he said.

“This investment will also back Canberra’s construction workforce and economy at a critical time, with the bridge upgrade expected to create more than 700 jobs.”

Mr McCormack said most of the construction materials used for the project, such as the steel and concrete, would be manufactured in Australia.

Liberal Senator for the ACT Zed Seselja said the funding for the bridge upgrade would significantly improve safety for motorists and pedestrians alike.

“It is infrastructure projects such as these that make a real difference for the day-to-day lives of Canberrans and, of course, for local jobs and the economy at this vital time, which is why we are pleased to confirm federal funding will flow,” he said.

Senator Seselja said the project was part more than $1.3 billion in new investments announced in the ACT by the Federal Government in recent years.

Concrete has never been imported to Australia.

It’s all for the bloody tram, should go up Constitution Ave around Russell over Bloody Kings Ave though Barton back to Adelaide Ave

Simon Southwell this is separate to the bloody tram. That is still going through approval process and Barr wants to build it between the road spans! I’m sure Barr will spend about the same or more and not blink an eye!!

Simon Southwell you’re probably correct but I’m guessing the thought process is about making the tram a main artery between centres. The defence line will go to the airport and the town centre line will go down Comm ave. It’s an expensive want

It should be like harbour bridge. Cyclists one side, pedestrians the other.

Sorry to ask, but what are “active transport trips” exactly?

Craig McPherson or signalising an intersection when they are installing traffic lights? 😂

Tristan Melhuish oh yes, and hey I get this language from government – bureaucracy at its finest – but from a journalist – surely the job of the press is to communicate – pass or convey a message without ambiguity?
Active transport trips – WTF?

surely they are to be contrasted with passive transport trips, i.e. falling asleep on the bus and missing your stop

Its not as if they have a choice…