The Australian National University will need to cut fewer jobs than previously announced – revising its estimate of job losses from 215 to 194, after 250 voluntary separations in September – but it’s put annual leave loadings on the table as a possible cost-cutting measure to retain positions.

The ANU has released its Recovery Plan in the wake of the financial damage the COVID-19 pandemic has wrought, detailing measures on both the revenue and saving sides, as well as where the job losses are being felt.

The ANU says the reduction in the number of job losses is due to a larger uptake of voluntary separations, which sat at 273 last Friday.

The university’s debt limit has been raised to $800 million, and it will borrow up to $615 million of that limit, of which it has so far used $315 million.

Non-salary savings will likely contribute about half of its cost-cutting target, but as well as the job losses, the university is looking at the possibility of removing the 17.5 per cent annual leave loading provisions from the ANU Enterprise Agreement, which requires a formal vote by staff. 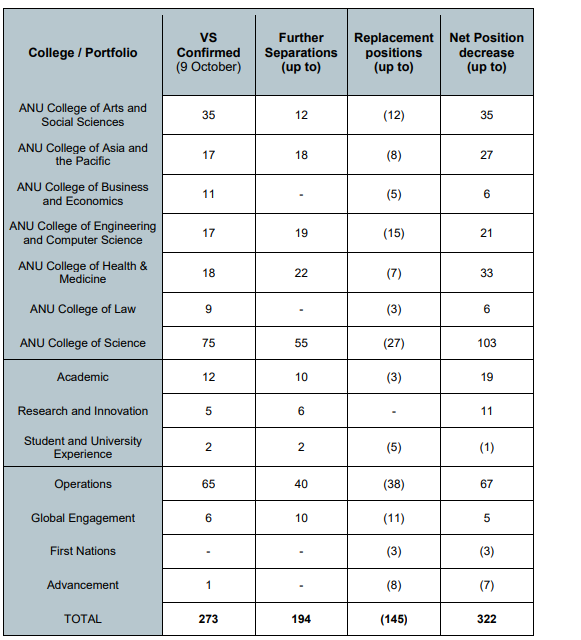 Where the job losses will come from. Image: ANU.

This could save the equivalent of up to 33 positions, the Recovery Plan says.

This measure was one of a number of options raised in consultation with the National Tertiary Education Union, which has called on the ANU to cost it.

ACT secretary Cathy Day said the union had negotiated a range of trade-offs across the university sector in exchange for job security, and this was the one the ANU has seized on.

She said the ANU had initially refused to cost the leave loading option unless the changes were permanent, but the union had rejected that and again asked for a costing.

The idea had not been taken to union members and it would depend on what was given in exchange for it to be even considered.

”We fought hard for it and we certainly wouldn’t give it up without getting something definite in exchange,” Dr Day said.

She said the Recovery Plan included both job losses and new hires.

”We would like to see some mechanism where those people [under threat] could be retrained or redeployed, given some support, jobs redefined rather than just throwing out the old to bring in the new,” she said.

The union would continue to negotiate with management, try to reduce job losses and protect people who are going to lose their jobs.

It wants an enforceable commitment there will be no forced redundancies during any period in which temporary measures are in force.

The sector-wide research funding increase announced in the Federal Budget could reduce the need for further job losses, estimated to be a maximum of up to 30 positions in 2021 and 2022.

The Plan shows the College of Science as the hardest hit by job losses, with up to 103 net positions to go, and 75 already confirmed.

The ANU will also look to philanthropy to boost revenue.

”We will need to continue to tell a compelling story to philanthropic partners to build enduring relationships,” the Plan says.

Vice-Chancellor Professor Brian Schmidt said the university had some more pain to endure before it was financially sustainable.

”But we must also be the national university that Australia needs – and we will not be if our strategy is solely reliant on cutting costs,” he said.

“We must invest in our people, our community, our campus, our digital infrastructure and our ideas. We must grow our revenue and prioritise activities.”

Professor Schmidt said the decisions that need to be made must be fair and equitable, and not place a disproportionate burden on any particular part of the ANU community.