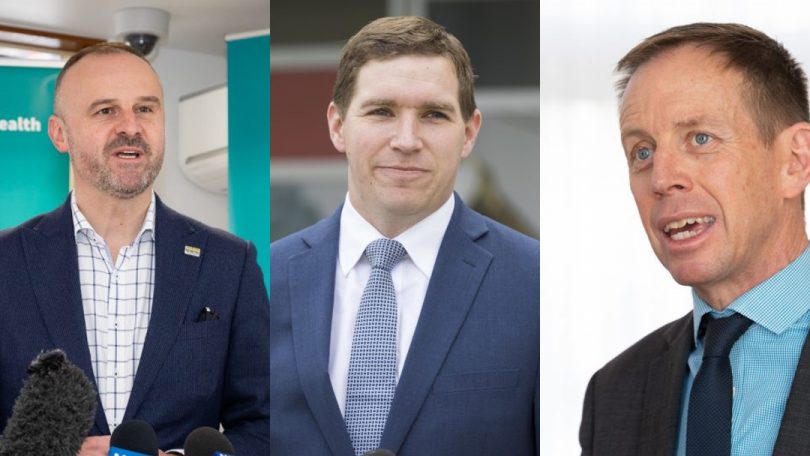 Around 2,500 people can decide the outcome of the ACT election, according to Canberra Liberals leader Alistair Coe, while Chief Minister Andrew Barr says no seat or vote is being taken for granted.

Seats have, and will, come down to the wire – separated by only a few hundred votes for the coveted fifth seat in each electorate.

It is no wonder that the leaders of each major party in the Assembly, including the Greens who hold the balance of power, are out campaigning vigorously and non-stop ahead of Saturday’s election, missing no opportunity to take potshots at their opponents and differentiate themselves from coalition partners.

The Liberals are campaigning hard on their tax cuts and promising to make services in Canberra more efficient. Labor is falling back on its “experienced and progressive” record, hoping to entice voters with stability during COVID-19, while the Greens are keen to spruik their environmental policies and social reforms.

With an election outcome just around the corner, hear the leaders’ pitches and find out what they stand for.

READ ALSO: Where the election can be won and lost

How are you deciding who to vote for? Region Media is interviewing the leaders of the Assembly's three key parties on their vision for Canberra. First to speak with Genevieve Jacobs is Labor's Andrew Barr on the economy, incumbency and experience.

If you're wondering who to vote for in the ACT election, Region Media can help. We've interviewed the leaders of the Assembly's three key parties. Genevieve Jacobs spoke with Liberal leader Alistair Coe on experience, growing the economy and his vision for Canberra.

Greens leader Shane Rattenbury says their ACT election focus is on pragmatism and values. He talks to Genevieve Jacobs about partnerships, delivering power to a development friendly government and deliberative democracy.

On Saturday, 17 October – election day – polls will be open from 8:00 am to 6:00 pm at 82 polling places across the ACT. You can find a full list of polling places at Elections ACT.

One Response to Final pitch: haven’t voted yet? Here’s what the leaders want you to know
Filter
Showing only Website comments

The best thing that could happen this election is for the greens to lose the balance of power. They have used it to do nothing but push through nonsense that has driven up the cost of living for everybody. Then there is rattenbury busy legislating childrens toys, which is tiresome.