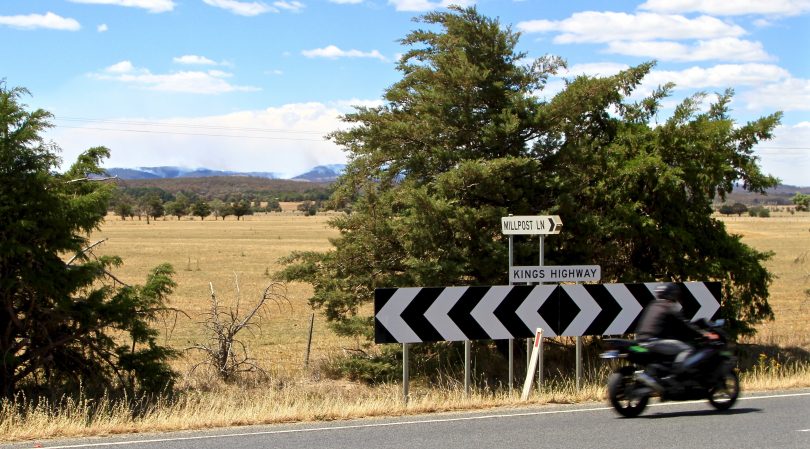 The Kings Highway has been reopened after a grass fire that broke out near Bungendore earlier this afternoon caused the closure of the Highway between Bungendore and Braidwood.

Live Traffic NSW reported that the Kings Highway had closed in both directions at about 3:30 pm.

The Highway has since reopened with a reduced speed limit of 60km/h between Goulburn Road, east of Bungendore and Mecca Lane, west of Braidwood.

Several properties are in danger and NSW Rural Fire Service (RFS) crews are undertaking property protection measures in the area.

Darren Marks from the NSW RFS Lake George Zone said the fire moved quickly in a north-west direction after it started.

“The fire has started north of the highway and is heading in a north-west direction up towards the Mount Fairy area,” Mr Marks told Region Media.

“I have around 10 trucks already there, and another 20 on their way,” Mr Marks said. 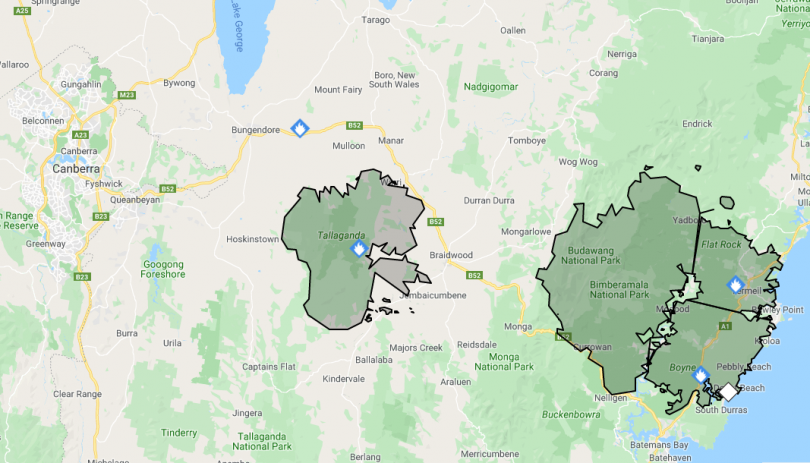 A grass fire to the east of Bungendore between Bungendore and Braidwood. Image: NSW RFS

The fire is also moving towards Tarago Road.

The RFS has also sent three helicopters, including the new Firebird 100 from the ACT which has increased surveillance capabilities and an infrared camera to help spot even the smallest embers through low visibility and smoke haze.

The Kings Highway between Braidwood and Nelligen between Narranghi Road and Reid Street also remains closed due to fire.

Motorists are urged to avoid the area and keep up-to-date on https://www.livetraffic.com.

May Agnew - 59 minutes ago
I am being blocked from SHARING my above comment -not allowed to speak the truth these days --WHAT NEXT ?? View
May Agnew - 1 hour ago
Turning the beauty of Canberra into a concrete jungle now and to think that so many hard workers who built this beautiful cit... View
Jamie Peterson - 4 hours ago
This article is the same as a puff piece for Andrew Barr 😂😂😂😂😂😂😂😂😂😂😂😂😂😂😂😂😂... View
Lifestyle 65