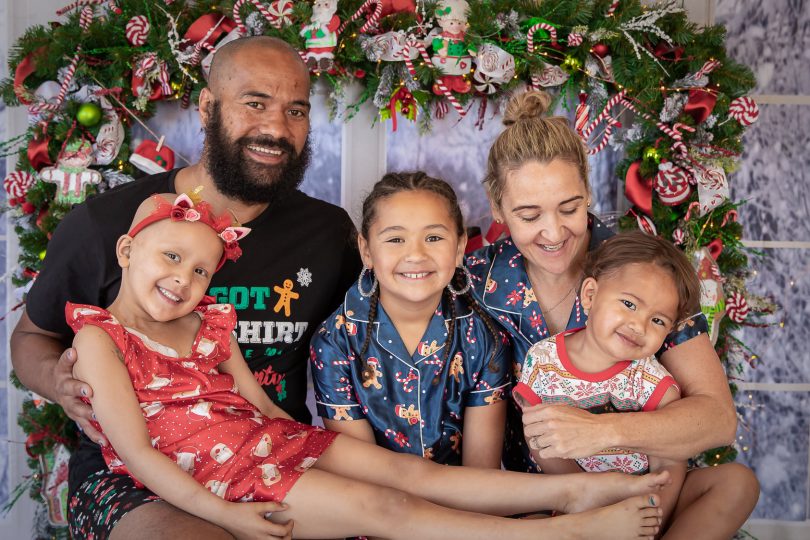 Kristy Giteau and Soakai, with their three children in December 2020. Photo: Supplied.

When Kristy Giteau’s four-year-old daughter Ka’ili complained of stomach pain, Kristy thought it would pass. But the pain persisted. Then Kristy noticed blood in Ka’ili’s urine.

And thus began a chain of events that dramatically altered their lives.

Ka’ili was diagnosed with a rare form of kidney cancer: Wilm’s tumour. Kristy clearly remembers the diagnosis: “It was a stage four tumour that had grown in her kidneys the size of a rockmelon with pulmonary metastases.”

The last couple of years following the diagnosis represented a roller coaster ride for Kristy, her husband Soakai, and their three children.

Upon relapse, Kristy, Soakai and Ka’ili had to relocate to Sydney for six months as Ka’ili underwent treatment. Their two other children stayed with Kristy’s parents at Jerrabomberra. 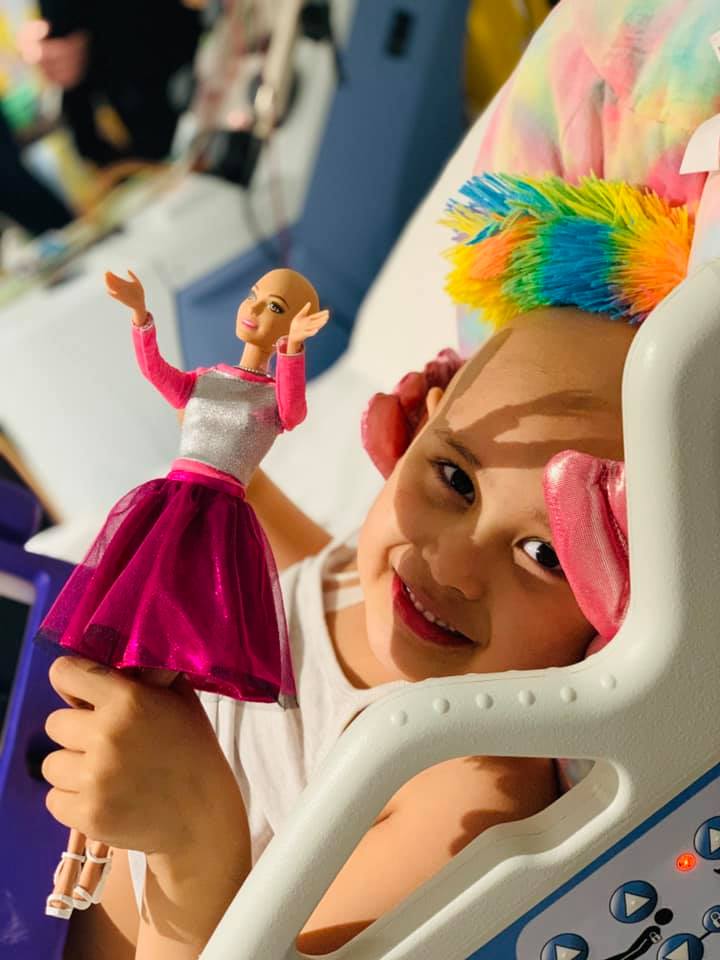 It was during this six-month period in Sydney that Kristy noticed gaps in the system when it comes to supporting families facing a similar situation.

The financial burden is often overlooked as families focus on doing all they can to improve the lives of their children. In response, Kristy decided to establish the charity ‘Win the Day’ to raise funds for the families of children with rare cancers, as well as raising funds for cancer research.

“I started to look at ways to help other families going through what we had been through,” says Kristy.

“I wanted to help people who lacked the financial support needed, as well as creating a means of coping with the unknown. There is a reduced chance of survival from rare childhood cancers, and less support for the sufferers and their families.”

Kristy, an assistant principal and teacher at Queanbeyan South Primary School, decided to use her organisational skills and her incredible sporting network in the Canberra region to get the charity off the ground.

She has plenty of street cred when it comes to sport, having played for the Australian Women’s Rugby team, including representing Australia at the 2010 World Cup. She was also a member of the Australian Sevens side and the Australian Touch Football team. 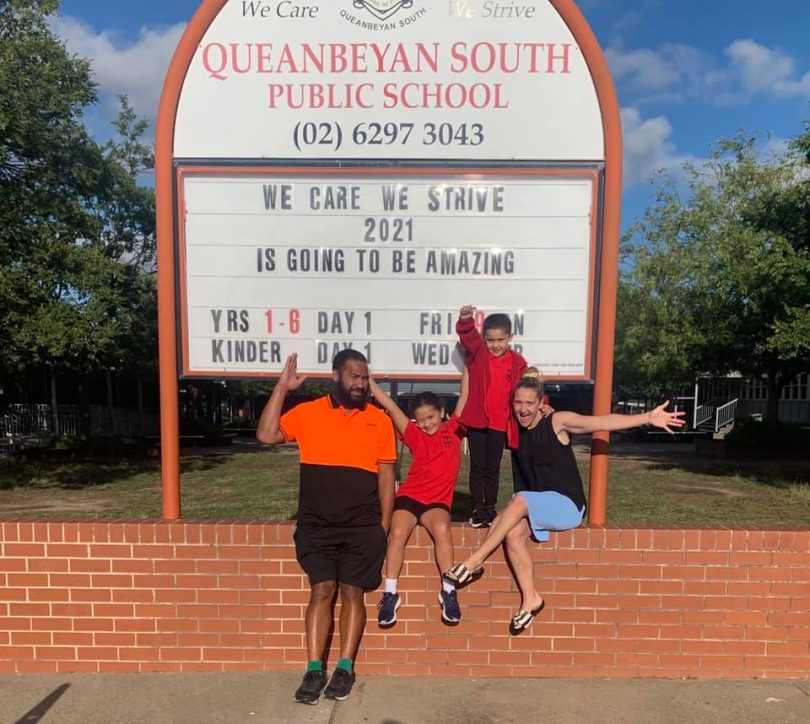 Kristy also had plenty of sporting star power to draw upon for support.

Already the Googong Hogs Sporting Club has embraced the charity with the men’s AFL team wearing rainbow socks, while the netballers played with rainbow ribbons in their hair.

On 17 July the Raiders will adopt ‘Win the Day’ as their game-day charity. Kristy’s father, Ron, who played 226 first grade games in a stellar career for Wests, Easts and Canberra, will blow the Viking Horn ahead of the game against the Sharks.

Then on 14 August, all players in the John I Dent and the ACT women’s competition will wear ‘Win the Day’ charity socks.

Anybody who has worked in sport in Canberra will testify that getting this many sports on board is no mean feat.

There will also be a gala dinner at the Arboretum in October. 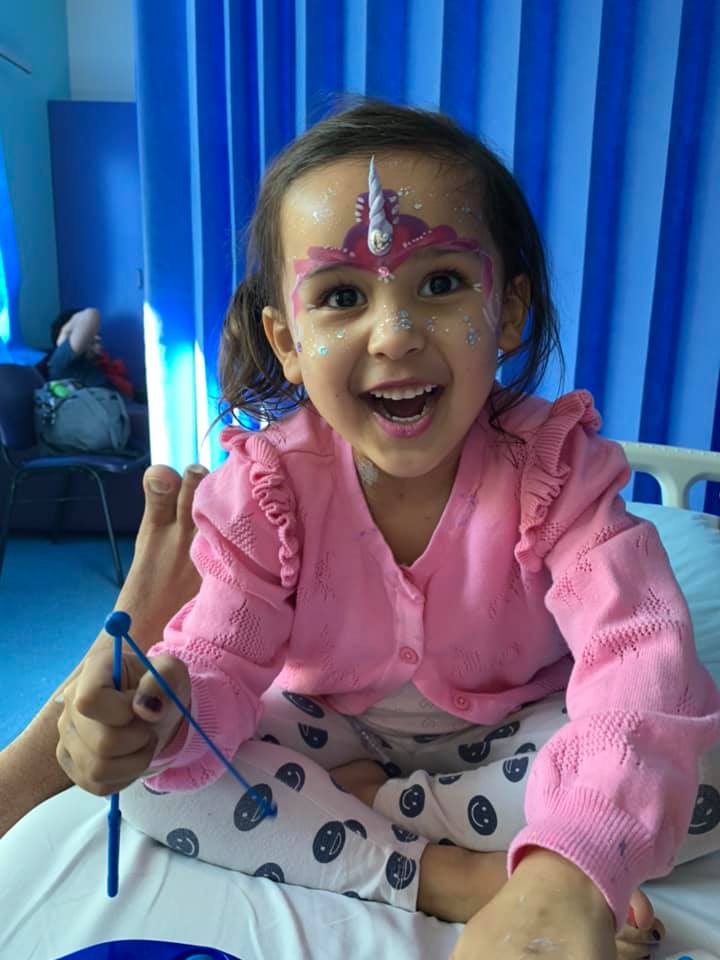 Kristy’s toughness that she exemplified on the football field seems to underpin her will and determination to make the charity a success. But as in sport, it has been a roller coaster of emotions.

“Ka’ili had eight months of treatment and we thought we were on the road to recovery, but the cancer returned to her lungs in June last year.”

Fortunately, that hurdle appears to have been overcome.

“She’s tracking really well now and after two years there may be an endpoint,” Kristy says.

For Kristy though, she’s far from calling it quits. Through her charity, she remains committed to helping other families of children with rare cancers who face the uncertainty and expense that accompanies the diagnosis and subsequent treatment.

To find out how you can get involved, visit Win the Day.