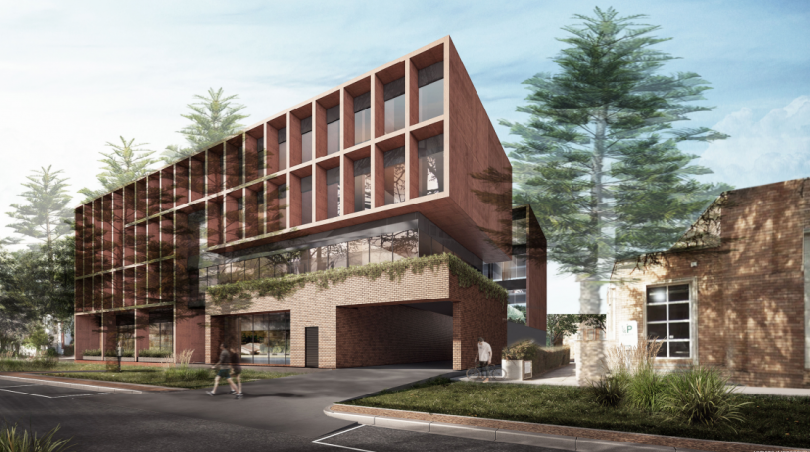 Development giant Geocon has lodged a development application for its revamped proposal for a Kingston site after widespread community opposition, including an intervention from Chief Minister and local MLA Andrew Barr to its original plans.

Geocon scrapped its plans for an eight-storey, mixed-use development for 84-86 Giles Street (Blocks 13 and 22 Section 22), which many considered out of step with the character of the area, and went back to the drawing board.

It unveiled a proposal for a four-storey commercial building in July for pre-DA consultation.

At the time, the Inner South Canberra Community Council and the Kingston Barton Residents Group welcomed the changes but remained concerned at the four-storeys, which is double the Precinct Code height limit, although there is leeway for higher buildings if it is “compatible with the desired character, and appropriate to the scale and function of the use, and minimises detrimental impacts, including overshadowing”.

This DA covers the demolition of the existing two-storey buildings, construction of the new building with two levels of basement parking, and landscaping.

There will be 800 square metres of ground floor commercial tenancies and three floors of offices totalling 3983 square metres.

There will also be five surface car spaces and six bicycle spaces at the rear of the building.

Basement access will be from Giles Street, while services and waste collection will use the rear lane off Eyre Street.

The DA says the goods loading areas and waste collection facilities are located at the south of the site to reduce visual clutter and improve the appearance of the Giles Street façade, in addition to removing this traffic from Giles Street.

READ ALSO Nimmity’s bell will open at last, a sign of hope for the tiny Monaro community

It suggests that the car park to the rear of the development, which can be accessed from Eyre Street, could be used to park trucks during construction, with the agreement of businesses.

It says the building has been sited to the west of the site to reduce overshadowing and overlooking into the nearby residential properties to the east and south-east.

This setback has allowed a utilities easement, which will be landscaped and secured to improve user amenity.

The design from Turco and Associates has been inspired by the Kingston Group Centre, with its earthy, pale tones reflected in the proposed colour palette.

“The brickwork featured on the neighbouring Kingston Post Office has been continued along the proposed Giles Street façade. This façade thus responds to the contemporary foreshore to the site’s east and shows a progression in design across the façade to reflect the older Kingston Group Centre to the west,” the DA says.

Interaction with the street is achieved through a prominent main pedestrian entry and significant glazing.

The DA says a feature is the use of prominent architectural louvres that create vertical rhythm similar to that found on the neighbouring Kingston Post Office to soften the building’s clear contemporary style.

It says a visually open foyer encourages pedestrians through the site, which will activate the existing laneway to the south and reduce dead ends to improve safety.

Residents considered the original proposal for 106 residential units and four ground-floor non-retail commercial units too big, that it would pose parking problems and a reliance on a rear laneway for access would create traffic issues.

In an unusual intervention, Mr Barr said in an email to the Kingston Barton Residents Group last year that the mixed-use proposal went too far.

Comment was sought from the KBRG on the DA.