German machine gun among 800 firearms handed in during ACT amnesty 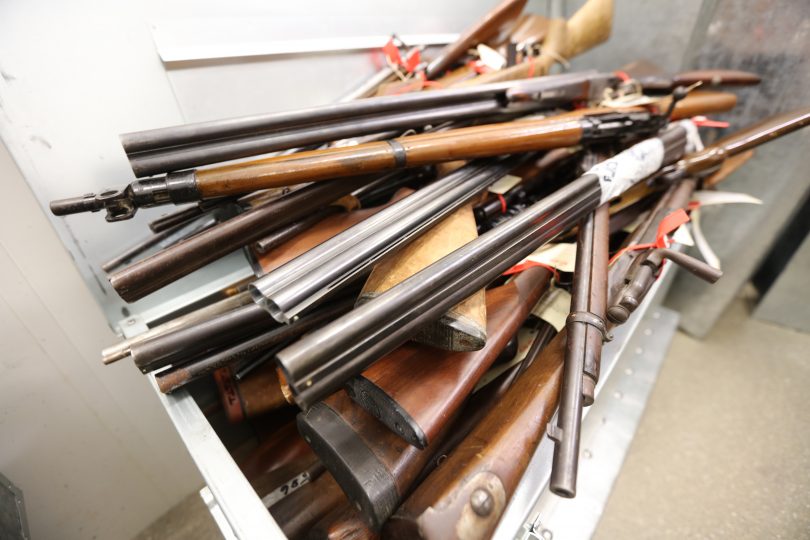 Some of the many firearms surrendered to ACT Policing during the amnesty. Photo supplied by ACT Policing.

Around 800 firearms including an 1870s Queensland Police rifle and a German machine gun were handed in to ACT Policing during the National Firearms Amnesty in the ACT between July 1 and September 30 this year.

All state and territory police services took part in the amnesty which was the first national amnesty to be held since the Port Arthur massacre.

An 1874 Martini Henry rifle issued by the Queensland police was among more than 120 firearms surrendered in the first weeks of the ACT amnesty alone, along with a genuine light horse leather rifle bucket. The rifle will be gifted back to the Queensland Police Museum.

Another interesting weapon to be handed in during the amnesty was a non-functioning German ME8 Maxim Machine Gun. This gun will be gifted to the Australian War Memorial for their collection.

During the amnesty period, Canberrans in possession of unlawful, or unregistered firearms and firearms-related components were able to turn their weapons over to police via the National Firearms Registry at Mitchell. 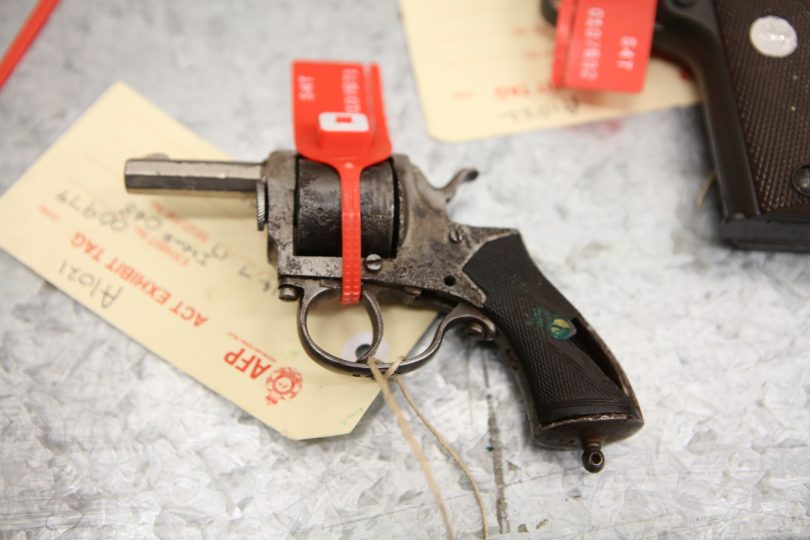 One of the firearms surrendered during the amnesty. Photo supplied by ACT Policing.

During the amnesty, they could surrender the weapons free of the risk of prosecution or monetary fines.

ACT Police Minister Mick Gentleman has welcomed the number of firearms surrendered during the amnesty.

In originally announcing the amnesty, Mr Gentleman said that participants would not only avoid prosecution but also help keep Canberra safe by ensuring unregistered and unlawful firearms didn’t fall into the wrong hands. 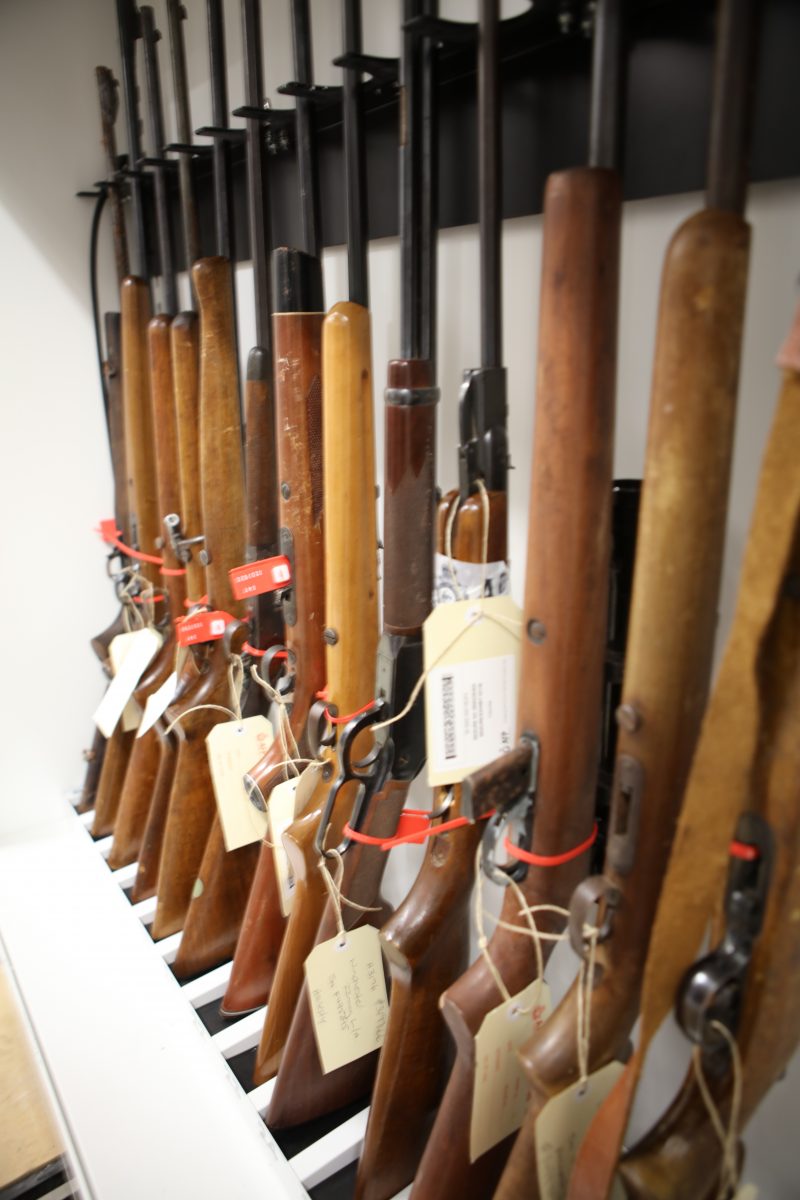 Speaking a few weeks into the amnesty, Deputy Chief Police Officer Mark Walters said that a vast array of firearms had been handed in.

“ACT Policing is committed to ensuring that Canberra remains a safe city and this amnesty assists in removing unregistered and unwanted firearms and firearm-related items off our streets,” he said.

“A number of firearms have been handed in by people who own other firearms, but did not have the appropriate permits to own the surrendered firearm.

“It’s important that firearm permit holders are aware of the legal requirements to obtain the right permit before possessing the firearm.”

Do you think the firearms amnesty has played an important role in getting illegal guns off Canberra streets? Let us know your thoughts in the comments below.

Rob Long - 4 minutes ago
The Nelson legacy, the liberal wrecking of the AWM. He systematically wrecked the joint. View
Timothy Bailey - 6 hours ago
The AWM and "ANZAC" are very powerful icons. Difficult to argue with or question. The whole 'Beersheba - last great cavalry c... View
BlowMeDown - 11 hours ago
I think you've just summarised the Labor/Greens strategy re promoting light rail by derailing, as they did, the bus system in... View
Community 30

retep - 22 minutes ago
Applause. Thanks for your efforts. We too try to alleviate our energy use in similar ways. Also agree with your observations... View
HiddenDragon - 2 hours ago
Canberrans (particularly those without the income of a professor or an MLA) who are still absorbing the recent news about a b... View
jwinston - 2 hours ago
Jeez Chewy - I never picked you as a Tim Flannery fan boy? View
News 3

Paul Leins - 42 minutes ago
Chinmoy Misra so you're saying *you* can't maintain a reasonable speed in built up areas without some kind of ridiculous urba... View
Jeff Shapiro - 59 minutes ago
Ken Owers you need an idrive adapter or buy a Mercedes View
Chinmoy Misra - 1 hour ago
Paul Leins Congratulations. You missed the point entirely.... View
Business 63

assiduous - 1 hour ago
A scheme like this is akin to rearranging the deck chairs on the titanic, as opposed to meaningful reforms, planning and infr... View
Ann-Maree Jacobs - 2 hours ago
Four tries every time The site is down ! View
Community 4

ChrisinTurner - 7 hours ago
I had to look up stealthing on Google. Seems to have changed the whole intent of the word "stealth". The mind boggles with th... View
show more show less
*Results are based on activity within last 7 days

It's higher off the ground than any of its rivals. It has an all-wheel-drive system and driving modes for deep...
Community 29

“These are not toys”: Man hands over cache of gel blasters

Gel blasters aren’t ‘toy guns’, but they could get you 10 years behind bars

@The_RiotACT @The_RiotACT
Gungahlin is often seen as the new part of Canberra, but some locals have lived their whole lives there. The town centre is already big and it's still growing https://t.co/Kqq2xR1Mmm (39 minutes ago)