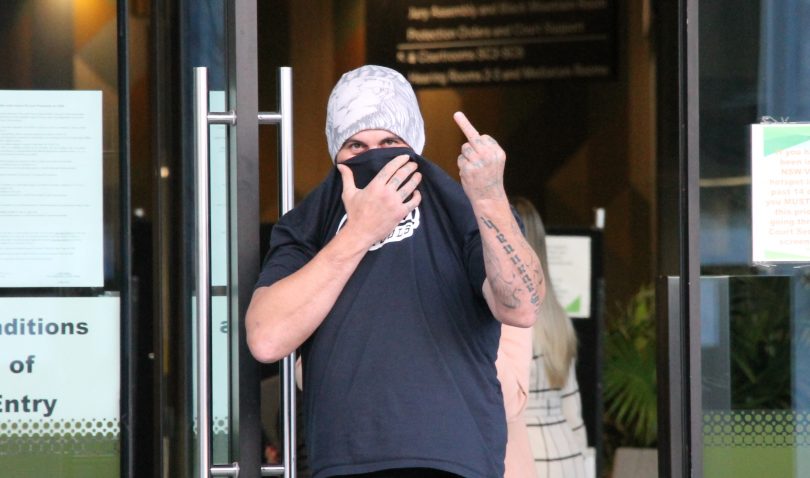 A man shot off a middle-finger salute outside the courts after he avoided jail despite pleading guilty to a long list of charges, including keeping illegal guns, a jungle python and fake $50 bills.

When he was arrested, police found an illegal silver pen gun, a gun that looks like an ink pen.

Police also found a black and yellow jungle python in a glass terrarium, which Gowen said was not his and he did not have a licence to keep.

ACT Domestic Animal Services collected the python. The person who Gowen claimed owned it also did not have a licence for the animal.

Police then found a loaded, 12-gauge sawn-off shotgun in the roof of the house, ready to fire. The gun had its serial numbers removed.

Gowen pleaded guilty to charges including unauthorised possession of prohibited firearms and unlawful possession of stolen property. He was convicted on charges of keeping a non-exempt animal and possessing counterfeit money.

In the ACT Magistrates Court on Wednesday (2 June), prosecutor Ms Sheridan said 16 items were included in the stolen property charge, ranging from a Canberra Hospital security pass to a car trailer and golf clubs.

When the python was found, she said it had no water in its container, but she described the counterfeiting as “clearly unsophisticated” as they were “very poor” imitations of $50 notes.

Ms Sheridan said the pen gun was found to be incapable of firing, but the same could not be said for the shotgun, which was “very dangerous”.

Gowen’s lawyer told Magistrate James Stewart he was now sentencing someone “completely different” from who he was when he committed his crimes.

“He’s done everything he can since he got out,” his lawyer said.

He said his 37-year-old client, a former removalist who was currently unemployed, was committed to stopping using drugs, and his use of alcohol was “rare”.

He said Gowen realised he no longer wanted the lifestyle he had been living.

Magistrate Stewart said the stolen items “ran into the thousands of dollars”, but the most serious offence involved the shotgun.

“There’s no legal purpose for a sawn-off shotgun,” he said.

“The firearm was ready to fire.”

He said the gun had been cut down to be more easily concealable and was “blackened or painted”.

He took into account the 10 weeks he had spent in custody as time served for these matters.

“Hopefully, you are sick of all this,” Magistrate Stewart told him.

Gowen walked out of the courts that afternoon, covering his face and sticking his finger up at media outside as he left.