Glitoris are Pretty Loud! with Bleach It Clean and Slagatha Christie 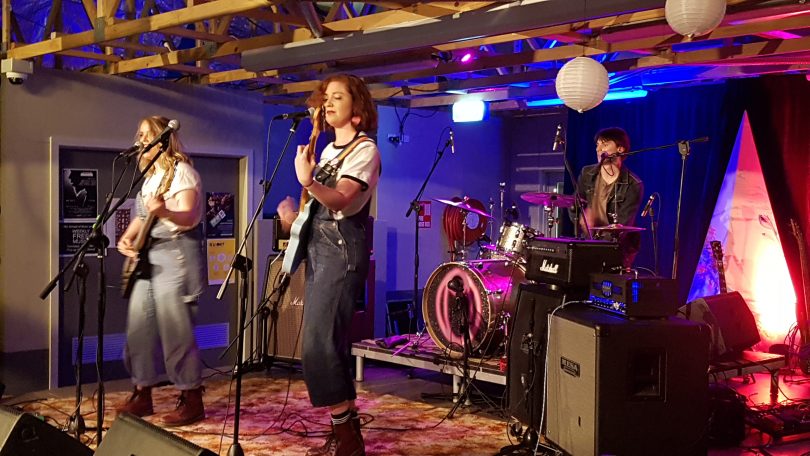 GLITORIS ARE PRETTY LOUD! That’s what the poster said, and if there’s one thing Glitoris can guarantee at this point… they mean what they say.

Glitoris seemed to have been keeping quiet in the nation’s capital for the last few months until the town was plastered with pink posters starring an armed female militia, declaring this latest gig to be held at the recently opened ANU Pop-Up. In order to further make the point that Glitoris are indeed loud, they had enlisted the tremendous line-up of Bleach It Clean and Slagatha Christie, both playing in short furious bursts.

What I cannot fail to mention about Slagatha Christie is that they garnered some remarkable overalls. It’s just a shame Canberran bands don’t sport this daggy and oft-forgot get-up more often! This three-piece band have a crazy, anarchic energy on stage, unable to move two verses forward without beginning to scream and flail. Mind you, that’s the sort of start you need to a show that promises to be PRETTY LOUD. Don’t get me wrong though, they’re also tuneful and fun. Plus, they put an excellent punk spin on Spice Girls’ classic Wannabe. Perhaps that will be on their next release, but for now you can check out their latest release, The Slag Sessions, here. 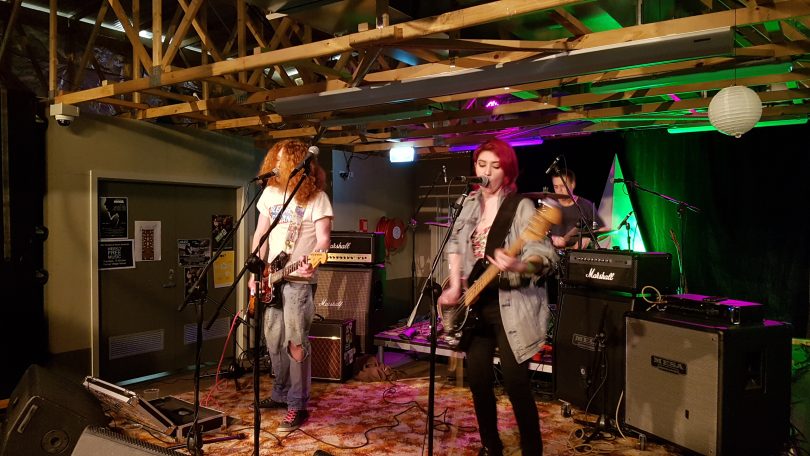 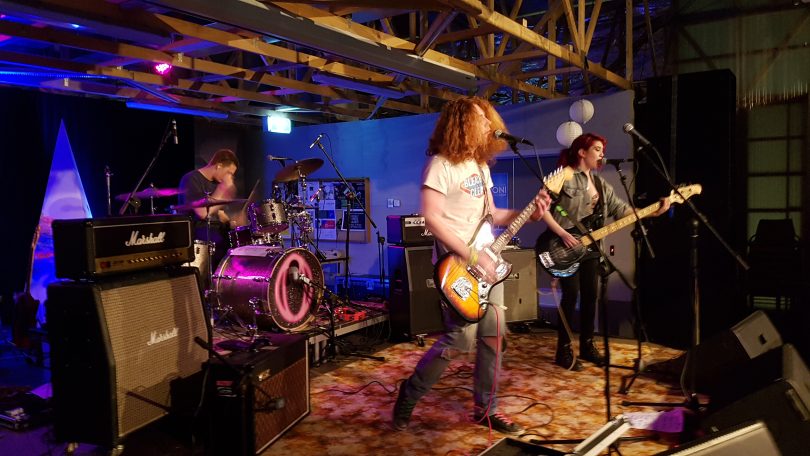 Bleach It Clean, as mentioned in one of my latest gig guides, are a band that seem to be playing at least five to ten shows per week. Having only finally just encountered them live at this gig, I was wondering how I’d missed them until now, considering that their sound gives the impression they’ve been around for at least 20 years. They are a near-perfect distillation of 90s grunge, and of course that meant they were PRETTY LOUD too. They tick both boxes on what’s required for good grunge: good catchy hooks, and a lot of volume. Gabby on the mic gives songs like Teen Pop Beauty a sense of urgency, while Blake is something stunning on guitar; I enjoyed anyone who can make a wild racket on the strings, and Blake under his great mop of red hair can certainly work some magic.

Glitoris graced the stage to what is by now a hardcore, die-hard legion of fans (affectionately named the Gliterati), sporting all sorts of eclectic gear, hairstyles and attitudes, from the headbangers to the simply dumbfounded and stunned. By now Glitoris are a guaranteed product; their famous mix of punk glam and straight-shooting politics now coming off as effortless and natural. By way of any new material I could glean from them, it sounds as if they will be going in a heavier direction, with two songs featuring big meaty riffs, which did not go unappreciated from the audience. But hey, they’ve still got a tonne of live favourites they have yet to commit to record, which we all have our fingers crossed they might come around to do eventually. 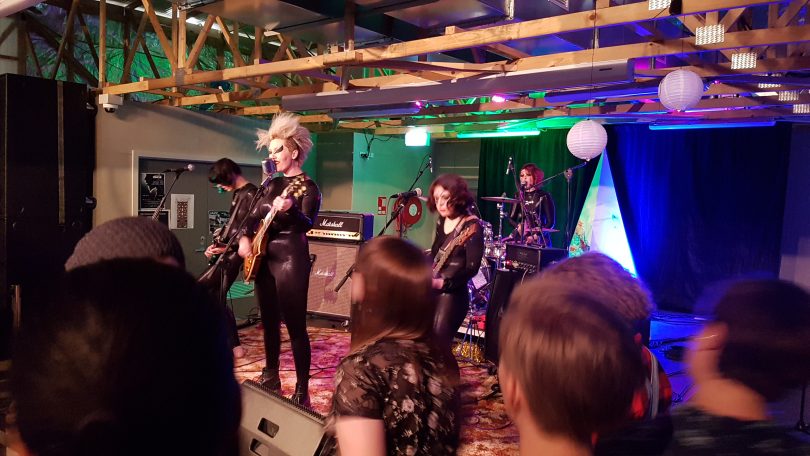 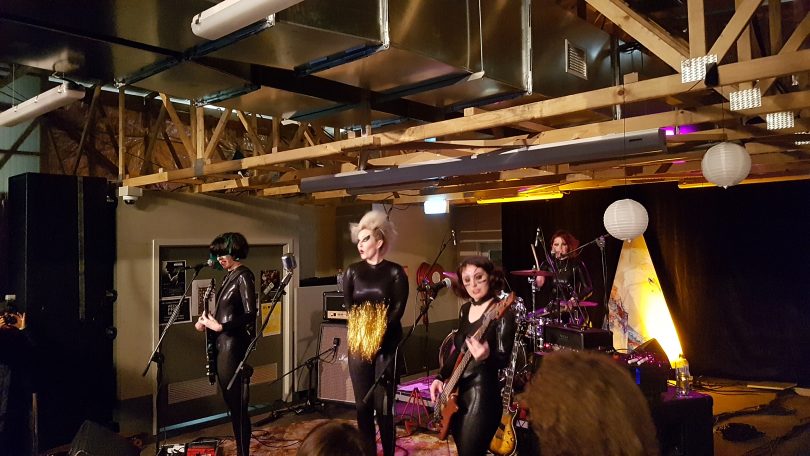 It would be remiss of me to conclude without mentioning this new mysterious venue, the ANU Pop-Up, which I only heard about after a glimpse of a Glitoris poster. With a big and wide amount of space, you can definitely imagine more theatrically inclined bands like Glitoris taking advantage of the stage space and drawing a diabolical crowd. They have some pretty nice beer there, too!

Glitoris will be taking to the stage again very soon, alongside Shonen Knife and Shenyawa, at the Basement on the 28th September. Check out this link for more details.

Richard G Krahe - 26 minutes ago
Yep, circuit should have run over commonwealth bridge, round Vernon Circle and back… View
Tom Henry - 55 minutes ago
Pete Henry This would be loose View
JS9 - 3 hours ago
You really are obsessed and bizarrely offended by a colourful roundabout..... very strange. Not surprising, just strange,....... View
Community 12

Pauline Parks - 36 minutes ago
Congratulations on 70 years together, lovely to see you well looked after as you did for others Ken & Pauline View
Marilyn Fasham - 58 minutes ago
Wonderful neighbours we miss you very much View
News 1

MERC600 - 1 hour ago
Mr Barr "“It would be really unfortunate if the Christmas gift to the nation is the highest ever level of cases across Aust... View
whatwik - 3 hours ago
Think of it as indicative only, with caveats, and not in any way specific. It's going to be a long school holidays for some. View
News 31

Peter Graves - 2 hours ago
It's slightly off-topic, but Larry Noye did write the definitive biography of King O'Malley. To whom we owe a great debt for... View
Margaret Lay - 4 hours ago
Gary J Potts I actually remember the local Dr Dr Potts any relation? View
Community 2

kenbehrens - 2 hours ago
Largely, I agree, although it's not those who are educated and trustworthy that are the problem is it? Lockdowns are to prote... View
News 3

Liza Jensen - 3 hours ago
Does anyone know where I can find information about how Landlords apply for the land tax rebate if they give tenants a reduct... View
News 26

Marty Hoenig - 3 hours ago
Yes by the closure by Sports Australia of the AIS Fitness Programs ..... View
Community 62

Catherine Mckean - 3 hours ago
Noni Evans I have one in my back yard. View
Community 1

JaseM - 4 hours ago
Fantastic story, and thank god it is being done by the salt of the earth..... View
show more show less
*Results are based on activity within last 7 days

@The_RiotACT @The_RiotACT
Watch this morning's rescue of a kangaroo from the freezing waters of Lake Burley Griffin https://t.co/MDcZa2adT1 (55 minutes ago)

@The_RiotACT @The_RiotACT
Fewer #exposure sites were added to @ACTHealth's #COVID-19 locations list overnight, and there were no close contact sites. An announcement on mental health funding is expected at today's 11:45 am press conference https://t.co/cKYolhCFg3 (2 hours ago)

@The_RiotACT @The_RiotACT
LDK Seniors' Living's $143 million proposed aged care facility next to Yarralumla Horse Paddocks needs to be scaled back, the National Capital Authority has been told in a community council's submission https://t.co/eEERxoj8Y8 (2 hours ago)