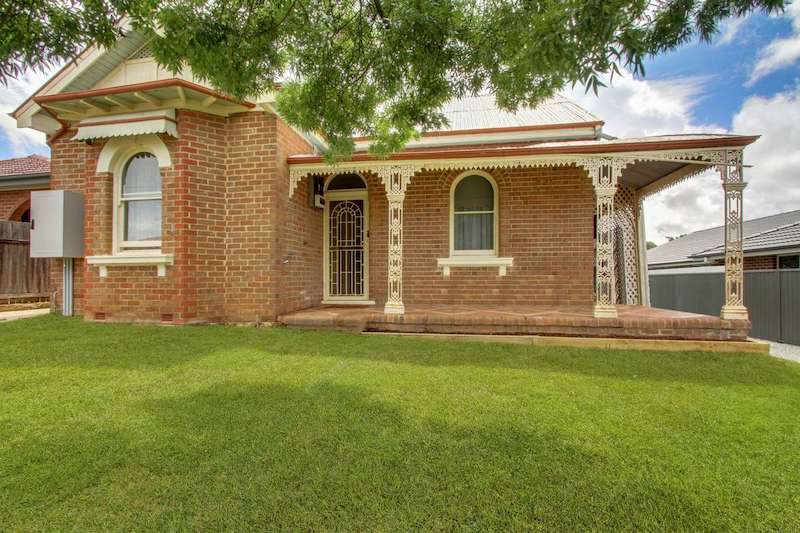 8 Francis Street, Goulburn, has great potential to be turned into a unique address. Photo: Supplied.

The love affair has served the city well, with homes under $450,000 being snapped up at auctions, and local builders constructing new homes on vacant land.

Typical of redevelopments around the place was the subdivision in West Goulburn, which culminated in the sale of 8 Francis Street.

Ray White Goulburn principal Justin Gay, who sold the home, says the original property was subdivided, and three new homes were built on a large block of land. The original home was sold off to a first home-buyer.

“They split the block into four. It faced Edward and Francis Street, and the original cottage wasn’t touched,” Mr Gay says.

A typical example of the infill that has been happening, each home had its own access driveway.

The three-bedroom home sold for $280,000. It has an appealing verandah entrance, original stove in the eat-in kitchen, and a large lounge room, all on a 425 square metre block – a small one compared to others in Goulburn; a big one in places like Canberra and Sydney. A fibro dwelling from the rear, and all under an iron roof, it has great potential to be turned into a unique address.

Mr Gay says Goulburn’s market has retreated this year, and the looming federal election is not helping, but may cause a recurrence of activity for the remainder of the year, if Labor wins and introduces its negative gearing reforms in 2020.

This is because of the grandfathering enabling people to get in for the last of the negative gearing tax benefits. The grandfathering element applies to property and assets bought before the policy begins. This means, for example, that if you own a property before January 1, 2020, you are able to negatively gear it after that date.

“We have certainly seen a decrease in investors coming out of Sydney across the board, we have certainly seen less people wanting to move regionally,” Mr Gay says. “We have had a really good influx of people from that Narellan, Camden, Appin area. But that sort of dried up.”

Mr Gay says at the upper end of the market opportunistic sales are still occurring in Goulburn. “If something good comes on the market, you can sell it,” he says. But these sales are the exception. “It is the first time I have seen the bottom end ‘tough’,” says Mr Gay.

The rental market is subdued but listings are holding the line. Volumes have dropped about 30 per cent.

“Prices are holding, people are quoting 5 to 10 per cent lower than 12 months ago,” Mr Gay says. “We have to get through this month and the election, I believe, to really get a good grasp of where the market is heading.”

Demand for rental property is low, and there are no shortage of places available to rent at many entry points. “Regardless of the election outcome, people re-group and continue on. I guess if there is a swing to Labor this time, there will be a bit of a spike in the market for grandfather rights,” Mr Gay says.

He says Goulburn is not only at the affordable end for investors, it is also a reliable rental market.

Helen Brinsmead - 3 hours ago
Lorraine Ruth Savage why not all of them? View
News 16

@The_RiotACT @The_RiotACT
All's well in this week's newsletter - plus ravens, earthquakes and a bumper Mallaluka Wines vintage. Subscribe now for all the latest news and features direct to your inbox https://t.co/DGtf49Wy4Z (49 minutes ago)