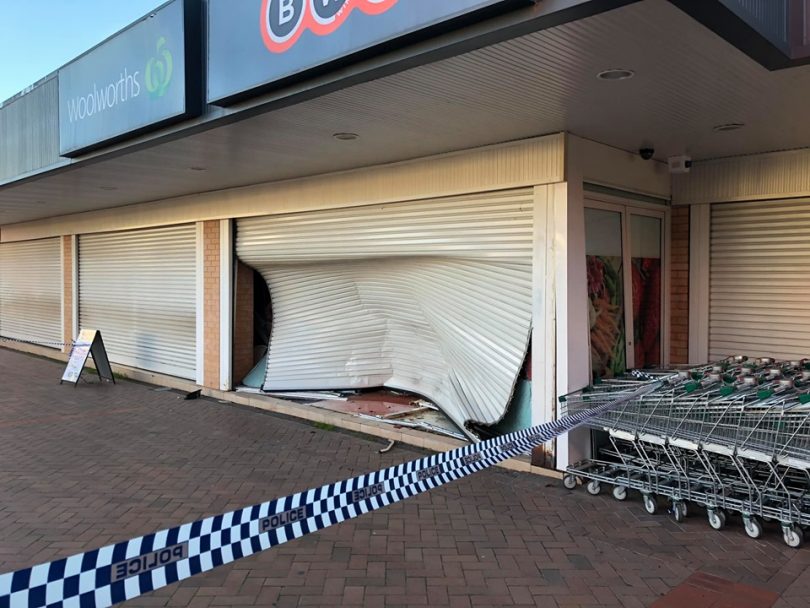 Hawker Woolworths was the scene of an attempted ram-raid. Photo: Canberra Elite Aerials.

Police are on a manhunt for three people involved in three separate ram-raids in Gunghalin and Belconnen in the early hours of Tuesday morning (25 June).

Around 3:40 am, police were called to the Woolworths in Franklin where people had smashed through the front doors and stolen gift cards and cigarettes.

Shortly after, police were alerted to a similar incident at Woolworths Hawker, where a car had rammed the supermarket but had failed to gain entry.

Later, police were alerted to a ram-raid that had occurred overnight at The Cook Grocer and around 5:45 am police received information about a car fire at the Hawker playing fields.

Police believe all three ram-raids are linked and were carried out by three people. Police are also searching for a red Subaru Impreza and a dark green Holden Astra believed to have been used in these incidents.

The latest incidents occurred just a day after a Toyota RAV4 was used to damage the front entrance of the Ngunnawal IGA and Charnwood Newsagency on Monday (24 June). Repco store in Greenway and Domino’s Pizza at Weston were also hit on 13 June.

Police said they are investigating possible links to all the incidents.

Anyone who may have any information or dash-cam footage that could assist police is asked to contact Crime Stoppers on 1800 333 000, or via the Crime Stoppers ACT website.

Adrian King - 2 minutes ago
Graeme Jeffries just like roads are for cars, right? But yet here we are....🤦🏻‍♂️🚲 View
Graeme Jeffries - 15 minutes ago
Footpaths are for pedestrians. View
Michael Norman - 35 minutes ago
Would a non-divisive approach to problem solving serve communities to move forward? The problem is around infrastructure that... View
Lifestyle 27

Geoff N Narelle - 16 minutes ago
I think that the author of the article has romanticised the story somewhat. It was probably a 20 minute bike ride each way on... View
Food & Wine 3

Ivana Ryan - 52 minutes ago
Toasted sandwich and a coffee 😋 Bojana Simic View
Christopher Rompotis - 2 hours ago
Hannah next brunch catch up? 🤔 View
Nicolas Normandeau - 10 hours ago
Matilda Jones I need this in my life. This sounds so good!... View
News 21

chewy14 - 56 minutes ago
Capital Retro, You're partially correct but not in the way you think. The SA battery has been so successful simply because th... View
David Wagner - 1 hour ago
I like it, but why not look at biogas using sewage plants eg. Europe or Stirling engines or ........ View
Capital Retro - 11 hours ago
You know what windfall means? Take that away and the venture has probably lost money. Gas peakers all over Australia would ha... View
News 1

@The_RiotACT @The_RiotACT
Opposition Leader Elizabeth Lee will introduce an amendment to the ACT Crimes Act today to make it an offence to 'stealth', the act of removing a condom during sex without consent https://t.co/jFSIrItv88 (21 minutes ago)