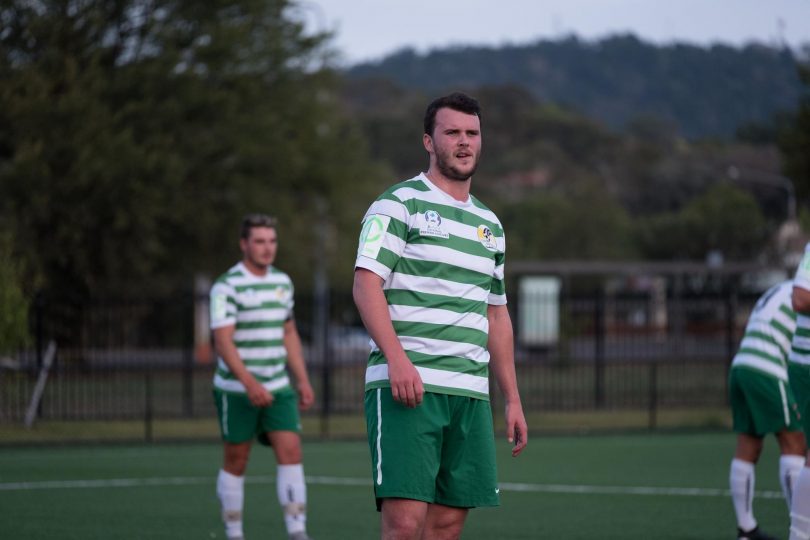 United coach Mitch Stevens said that Tuggeranong was made to pay for feeling like the job was done. Photo: Supplied by Capital Football.

They left it late but Woden Weston has snuck into the next round of the FFA Cup thanks to two late goals and a red card to Tuggeranong United.

Goals from Martin Deng and Blaise Vlazovski left the ten men United heartbroken after they dominated most the of the match and failed to take their chances.

United took the lead in the 84th minute through Danny Crkovski before the Wanderers struck back just two minutes later.

In a dramatic late twist, United’s number seven Walsh was sent off for his second bookable offence as the men in red and black pushed for a late winner.

In the third minute of injury time, Blaise Vlazovski headed home from a deep corner to the back post as United struggled to deal with the height of Woden’s big men.

United coach Mitch Stevens said that Tuggeranong was made to pay for feeling like the job was done.

“When you are on top for 80 odd minutes and you have that breakthrough, there is a sense of job done,” he said.

“I really think it was job done and we switched off a little bit. Two set pieces later and it’s game over. We have to remember that any set piece is an opportunity to score and that’s all it was.”

In a game littered with yellow cards and free kicks, Stevens thought the man in the middle was a little harsh to his side.

“My opinion is the referee was a little harsh but that doesn’t really matter. They are good officials and those guys are very good at what they do. But there was a couple there that I thought was a little harsh,” he said.

“There is an argument that they could have copped a few more but it didn’t influence the game. We are disappointed with the send-off but it was pretty black and white.”

United have the chance to bounce back quickly as they prepare for a rematch on Sunday afternoon in what is a battle of first vs second in the NPL.

“We had a great pre-season and we were really happy with it and we have had a fantastic start to the league and at the 86th-minute mark, we thought we were the better team tonight,” Stevens said.

“We had a clean sheet at that point and we were one nil up and I think everyone thought that this is a team that can win, but I think that contributed to the problem tonight.”