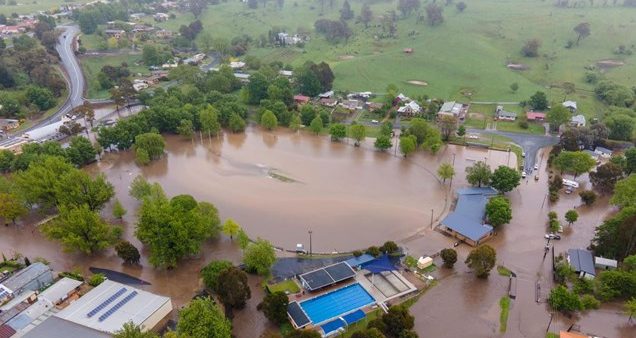 The NSW State Emergency Service (SES) has responded to multiple calls for help as heavy rain and strong winds continue to batter the state’s south.

Volunteers rescued a man from his ute trapped by floodwater in Tumbarumba on Saturday.

The small town’s caravan park, sporting oval and surrounding roads were flooded after a downpour of more than 50 millimetres.

The flash flooding damaged fences, culverts and a water main, and left mud on the floors of the oval’s toilet blocks and changing rooms for Snowy Valleys Council staff to clean-up as the water level fell on Monday. 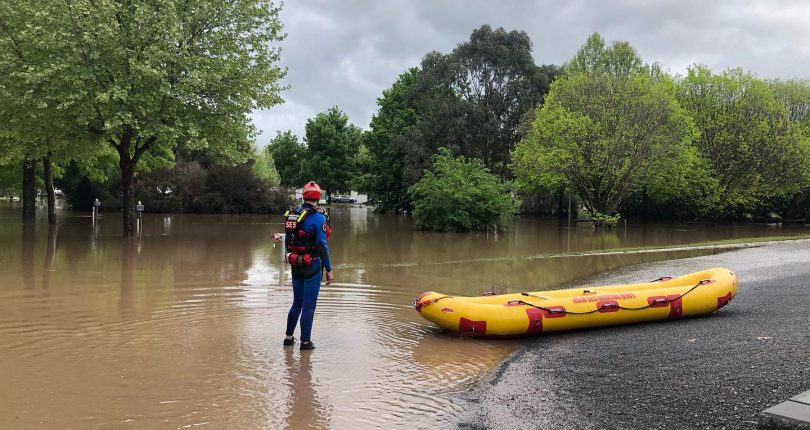 “We’ve got a lot of cleaning and repairs to do,” Snowy Valleys Council Mayor James Hayes said.

“We don’t know whether the flood was caused because a lot of the local landscape was burnt [in last summer’s bushfires], so there’s not as much organic matter to soak up the water or because the drought has broken quite spectacularly around here and the ground is saturated.” 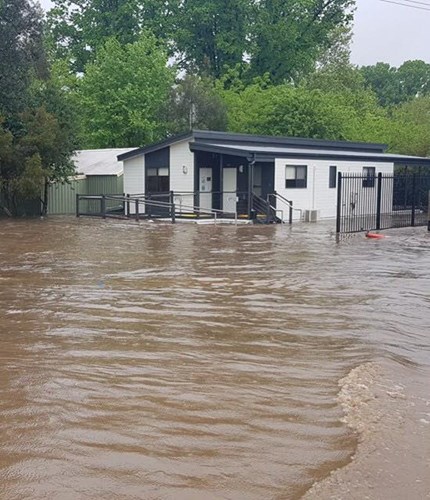 The area hasn’t experienced a flood as significant as Saturday’s since 2010 and 2012, Cr Hayes said.

“There were cars and bales of silage floating down the main street in my hometown of Adelong (about an hour north of Tumbarumba) in 2010,” Cr Hayes said. “We are in the Snowy Valleys, so it’s quite steep around most of our towns and the water can rise and fall very quickly in the valleys.”

NSW SES volunteers also responded to a leaking roof at Yass Soldiers Memorial Hall as the rain continued to fall across the weekend.

There was some concern that the leak had caused damage to the Yass and District Historical Society’s archives that are stored in the hall. However, the leak was contained to a stairwell inside the hall, according to NSW SES Yass Unit Commander Rob Bolin.

“We turned up and located the leak, which appeared to be in one of the box gutters in the roof. We put some plastic along the gutter to divert that water away,” Unit Commander Bolin said. 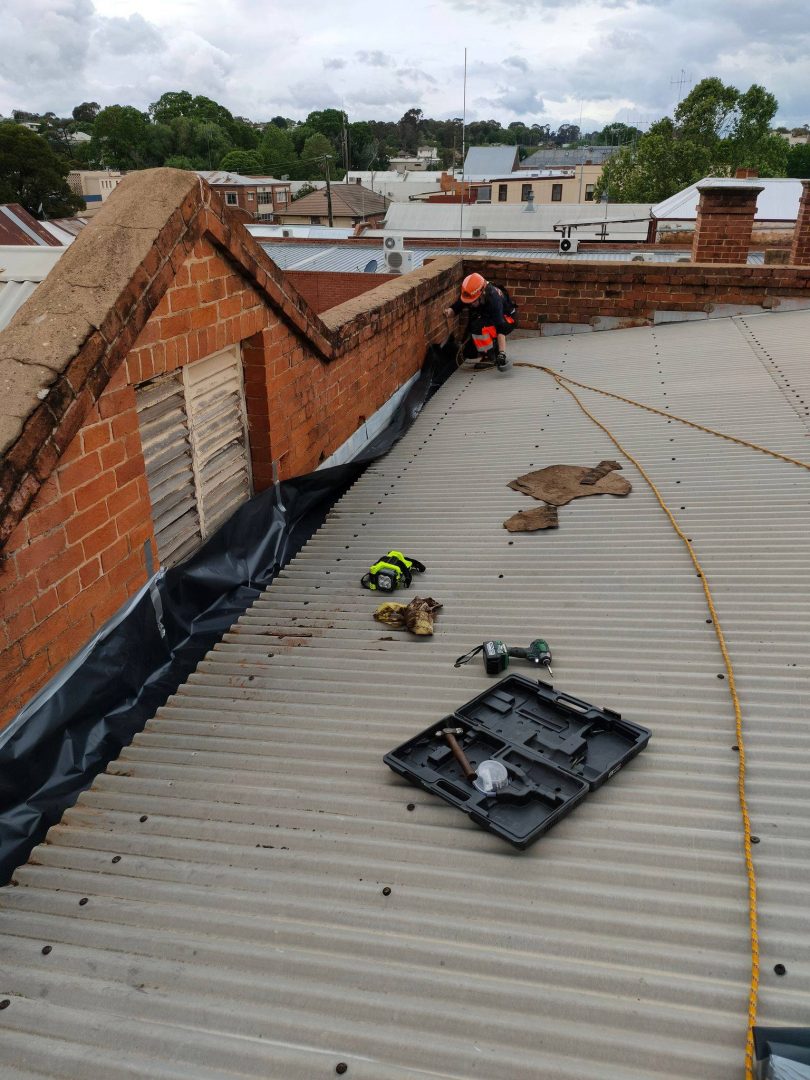 The low-level crossing in Yass was closed on Monday morning as the water in Yass River rose and flooded the road.

Volunteers were also called to leaking roofs on residential homes in Yass and Goulburn and trees that fell in Bookham and on Emma Street near Goulburn East Public School.

Unit Commander Bolin said his volunteers had been preparing for a busy summer since the Bureau of Meteorology (BOM) declared a La Niña.

“We’ve been making sure our volunteers are ready and checking our equipment over the past month of two,” he said. 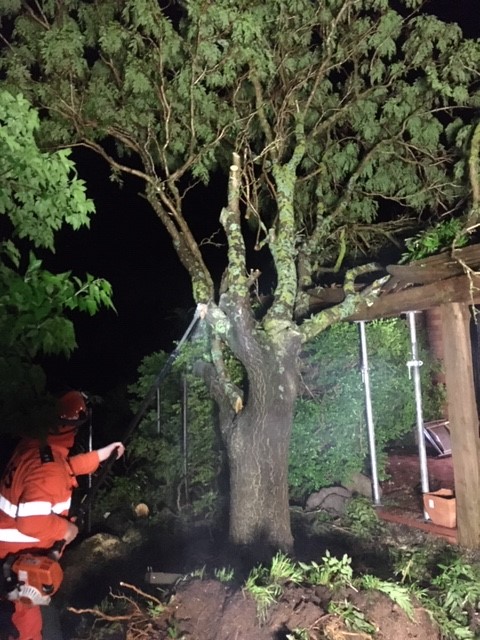 The BOM also issued a Hazardous Surf Warning and a Marine Wind Warning for the NSW coastline from the Macquarie Coast to the Eden Coast.?The hazardous weather conditions are forecast for today and tomorrow.

Joel Wiseman, SLSNSW Director of Lifesaving, said that conditions along the NSW coast are very dangerous today. He urged?the public to exercise extreme caution if they are visiting the coastline.

“Surf conditions from the Macquarie Coast down to the Eden Coast are extreme today and these hazardous conditions will continue into tomorrow. We strongly recommend members of the public not to engage in risky coastal activities such as rock fishing over the next two days. If people put themselves in danger in these conditions, it could be very challenging for our surf lifesavers to rescue them,” Mr Wiseman said.

Call the NSW SES on 132 500 if you have experienced damage from storms, wind, hail or a fallen tree, and if a tree branch is threatening your property or a person’s safety.

Anita Patel - 34 minutes ago
An excellent article. View
Sher Young - 7 hours ago
Wealth is alway about $$$ View
Sandy Hammersley - 8 hours ago
I have been both, I feel the same about myself, either way, it's not about money, it's about believing in yourself and doing... View
Community 10

Anne O'Hara - 3 hours ago
Hannah Zurcher I have no problem with workers going for what they think they are entitled to, I do have a problem with them p... View
Nathan Lofthouse - 4 hours ago
Sorry who else is pulling 4% p.a ? View
Keran Niquet - 15 hours ago
As usual Pinkas has got his head up his backside. Community support for his selfish actions is non existent! View
Community 1

MERC600 - 10 hours ago
What will be of importance is how the Feds look at electric powered vehicles. Fuel excise is a great earner for the Feds.. Ev... View
News 38

Zoe Walker - 10 hours ago
It has been a very wet season resulting in unprecented growth compared to the last decade. The mix of people staying at home... View
News 20

Amanda Biggs - 11 hours ago
Very disappointing. This will be devastating. View
News 3

jwinston - 13 hours ago
It would if it was rainbow coloured and all the legless lizards - oops, I mean handi-capable lizards - were all accounted for... View
Capital Retro - 15 hours ago
Amazing progress being made on this project. It couldn't happen like this in Canberra. View
Community 3

Therese Maree - 15 hours ago
So lovely! People are so clever and creative, thanks for sharing this story :) View
Breaking 4

ssek - 15 hours ago
Can Fair Work finally do the right thing and remove their protection? They are striking over a demand for an unreasonable pay... View
mitch82 - 16 hours ago
Let's see if Labor help the community as a whole or just their union mates/donors. I want my rates back.... View
News 33

Clare O'Rance - 16 hours ago
Great idea with so many women needing housing support. I wish YMCA all the best. View
Ian Hubbard - 17 hours ago
Good point Brent. Unfortunately the business model for community and sporting facilities is no longer viable. Like newspapers... View
Brent Hutch - 23 hours ago
Ian Hubbard places come, places go. I guess no one catches up with each other these days because the Bowlo went... Or perhaps... View
show more show less
*Results are based on activity within last 7 days

A Canberra couple has had a holiday they’ll never forget, picking up a division one winning lottery ticket on their...

@The_RiotACT @The_RiotACT
Readers are neck and neck on accepting hotel quarantine travellers in Canberra. And should we levy a road use charge on electric vehicles? https://t.co/tqBnt0sX2e (3 hours ago)

@The_RiotACT @The_RiotACT
Here are our top ten picks for your week ahead, including plenty of music and a fascinating talk from Sir Peter Cosgrove https://t.co/9liIXAVWGu (4 hours ago)

@The_RiotACT @The_RiotACT
The DA for the Fyshwick waste plant is going ahead after the government refused requests to talk to the proponent https://t.co/5dJmVGXVLj (6 hours ago)