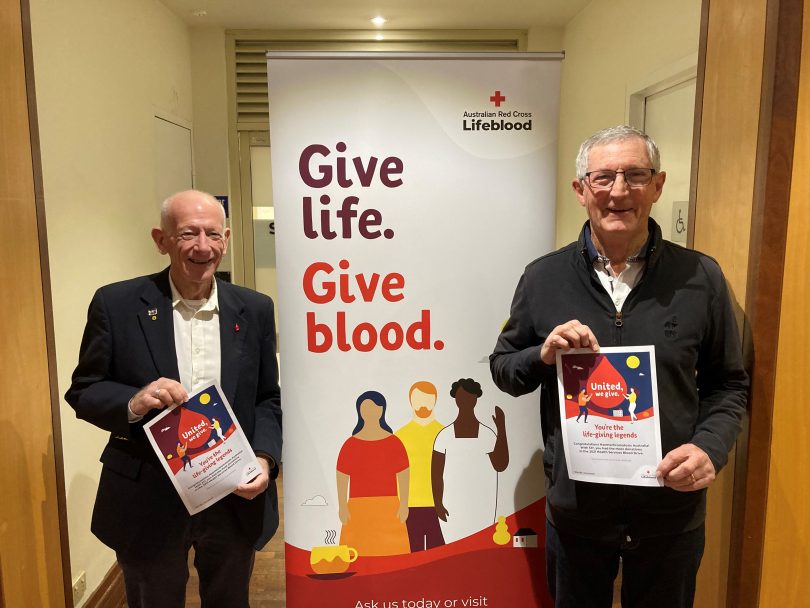 Long-time blood donors Jeff Hobson (left) and John Payne (right) both have the same rare blood condition, hereditary hemochromatosis, but they use it to do good. Photo: Jeff Hobson.

Jeff Hobson and John Payne are both iron men.

They don’t wear flashy suits like Robert Downey Jr does in the Iron Man films, but they do save many lives.

Both men have an iron overload that’s generally caused by a genetic condition known as hereditary hemochromatosis, but they use it to the advantage of many people as therapeutic blood donors.

Therapeutic donors are people who have too much iron, and actually need to have blood removed regularly to help their condition.

Depending on lifestyle and medical considerations, the blood that’s removed during a therapeutic donation can be used to treat patients, making it a win-win situation for everyone.

During a recent Australian Red Cross Lifeblood drive, Jeff and John participated with the Haemochromatosis Australia Lifeblood team, which topped the table with a whopping 512 donations, 27 of which were made in Canberra, recorded between 1 April and 30 June, 2021.

These donations could potentially have translated to saving 1551 lives.

Jeff discovered he had the hereditary hemochromatosis condition 35 years ago, when he was aged in his 30s, after an initial misdiagnosis of hepatitis C.

Once the condition was brought under control, all he was required to do was have blood removed on a quarterly basis, which he does these days through Lifeblood.

At first, Jeff tried to keep the condition under control though diet and exercise, but he soon found out this wouldn’t be adequate.

He’s already donated blood more than 100 times, although he says around 50 of them wouldn’t have been recorded because blood from those with haemochromatosis was not accepted by Lifeblood when he was first having it removed.

Jeff has now been involved with Haemochromatosis Australia for five years and has recently stepped up as a volunteer advocate for the organisation.

Most people inherit the condition from their parents, and if it remains undetected, the excess iron can overload the body’s tissues, damage organs and can even cause premature death.

However, if detected, it’s easily treatable and is no barrier to a normal life.

Early symptoms of an excess of iron can often be very similar to those experienced when not enough iron is present, meaning supplementing can only exacerbate the problem.

A simple blood test is usually all it takes to diagnose the condition these days.

Jeff pleads with anyone who is feeling lethargic to go and get tested to potentially save themselves from future medical trouble down the track.

“The [Haemochromatosis Australia] association is available if people need to contact us,” he says.

Kristie Galović you could do this.

Thanks The RiotACT for raising awareness of haemochromatosis – Australia’s most common genetic condition. Are you the one in 200 at risk?

#KenBehrens are invited to join the Haemochromatosis Australia (ACT) Lifeblood Team. Details here https://www.donateblood.com.au/lifeblood-teams/join or ask the friendly Australian Red Cross Lifeblood staff to enrol you when you next donate.

Congratulations on highlighting the importance of blood donations. There is also another minority group needed by the Blood Service.

Those with O negative blood and are also free of CMV (cytomegalovirus).
CMV is a known cause of cerebral palsy and other complications (https://www.cmv.org.au/what-is-cmv/).

No – I do not work for any of these organisations. But my emergency blood donation one Saturday night in 1986 did save the life of a newly-born baby.