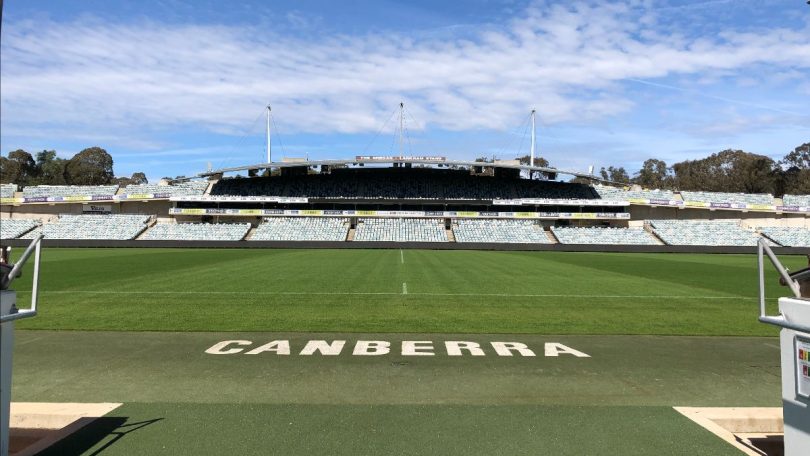 GIO Stadium will be home to the Canberra Raiders and Brumbies for the foreseeable future after the ACT Government announced there will be no moves to build a new facility in Civic until at least later this decade. Photo: File.

Confirmation from the ACT Government that there will be no work on a proposed indoor sports stadium in Civic – potentially on the site of Canberra Olympic Pool – until later this decade should come as no surprise.

There has been increasing speculation about budget pressures associated with COVID-19. There is also the expansion of Canberra Hospital and the second stage of light rail, on top of previous issues impacting the ACT economy such as Mr Fluffy and the Black Summer bushfires.

Now with confirmation that nothing is likely to happen until at least the late 2020s, what does it mean for Canberra’s football teams?

The general consensus is that GIO Stadium, in Bruce, is well and truly passed its use-by date. It is especially evident when comparisons are made with other stadiums around Australia.

With improvements being made to Brookvale Oval, home to NRL club Manly Sea Eagles, and the likelihood that a number of Sydney clubs will play home games at the new stadium at Moore Park, the Canberra Raiders are fast becoming the poor cousins in the NRL.

This is even more evident given the weather conditions that Canberra sporting fans experience in winter.

I doubt playing premiership games at Seiffert Oval, in Queanbeyan, is an option, but there is the possibility of the Raiders playing more games in country areas such as Wagga Wagga, where the club will take one home game next season.

If taking games to the country continues to be a success, the Raiders could play more than one game a season there.

The Brumbies have struggled financially to break even at GIO Stadium in the past couple of seasons.

Would it be more feasible to play some home games at Viking Park, in Wanniassa, where the costs of staging fixtures are significantly lower than GIO Stadium?

There has been radio silence on Canberra’s A-League bid, with little speculation in the past six months about the likelihood of the ACT securing a team.

Without an updated facility, it is unlikely the bid would get off the ground.

It’s a catch-22 situation for the Canberra A-League bid, with the government suggesting the city having an A-League team is important in any proposal to build a new stadium.

There have been plenty of curveballs with the stadium saga, including speculation that other locations for the stadium were being considered, including Exhibition Park. This speculation emerged well after Civic was deemed to be the logical site.

For the foreseeable future it will be a case of a continued forced relationship with GIO Stadium.

wow, being ‘impacted’ by a stadium would really hurt. Affected, perhaps?

Demolish GIO stadium and get rid of the silly rugby team. We need an indoor stadium so we can get a basketball team back, Plus indoor stadiums have much more uses.

ACT Government doesn’t own GIO Stadium. Probably a bit difficult to demolish it.

Besides the Woden Rams, Canberra has no good sporting teams anyway 💁🏽‍♂️

There are wants, then there are needs….

Plenty of room at the current venue – why not use the foundations that were laid years ago and build the Southern Stand?

How narrow minded is this government. Canberra needs the new stadium built where the city pool is and to build a new purpose built convention / entertainment Center across the road in that dirt car park next to the new apartment construction site. This will give so much more life to the city

Need an arena/indoor stadium first. The AIS Arena is gone so there’s nothing for concerts or Basketball or Netball or Tennis. The A League Men has overlooked the ACT too many times despite a viable venue already built. It could do with a reno or replacement but I think an arena is needed more. Then pursue a return to the NBL, they’ll actually take a chance on Canberra again like they’re doing now with Hobart.

Brumbies should half the time at GIO with games at Viking Park.

Who is running the Government Labor or the Greens

get a new government.. stadium asap a must

Who cares about another stadium, you know how much energy is required to build a new stadium, and here I thought Canberra was so concerned about “climate change”

Canberra stadium is fine. They need to do something with manuka oval tho. It’s such a nice historic facility, but the facilities are just shocking. They try to host thousands of people at cricket matches when the food and other facilities are suitable for 100s. Ever since I went to an India Bangladesh world cup match I have avoided the place, sadly.

Look I want a Stadium, but over 50% of the ACT budget is health and education. Add to that still paying off Mr Fluffy debt and Covid and I get why its delayed. Also I daresay Nth Queensland got a new stadium with 200 million from the federal government and they are trying to get some federal funding to help which is not forthcoming. I’d hope before the next ACT election we’d have details on building a new stadium.

Justin Watson depends who gets in at the next federal election. If some porkbarreling has to be done or not.

If its such a no brainer, then why isn’t the private sector interested in helping to build a new stadium?

Its a nice to have, but lets be frank – a new stadium is, and should be at the current time, a long way down the public works agenda – if some private sector entities showed genuine interest, then perhaps it might be a different story. And while people talk about Adelaide/Perth etc as examples of instant uplifts – you need to just look at a) difference in size of cities and b) difference in size of crowds as a way to recognise they are really very different examples.

You aren’t suddenly going to get an extra 20,000 at every Brumbies, Raiders game etc, unless the stadium was truly world class and built at a horrendously high price.

All that said by someone that would love a better stadium in Canberra – but recognises it is nothing but a pipe dream without some external force to drive it.

And it is highly likely it’ll still only be the Roosters playing out of the new Sydney Footy Stadium from the NRL, at least initially.

I think the AFL, NRL (forget soccer) and other stakeholders in the professional sports industries are crunching the numbers after a successful season despite the COVID 19 restrictions.

It is now very clear that games can be played anywhere at anytime and the spectators have become an at home audience happy to subscribe to several services that show every gave live or replay on HD so the huge little used stadiums will become stranded assets and future home unit sites.

You say no, it can’t happen? Well look out your window and count the number of food and online shopping vans roaming the streets.

Build it and they definitely won’t come. Look what a ripping success Barr’s “Pop-up Container Village”” was.

The game has changed forever.

Years delay in public houses fixes, a new stadium should not be a priority

Let’s wait till we deal with homelessness and poverty before another unnecessary piece of sporting infrastructure.

I’m just Glad we have a white elephant tram….

Anthony Briscoe The tram though was 1 billion over 20 years. A stadium is half a billion. over 1-2 years.

His love seems to be for AFL. The sooner he gets voted out and moves to Melbourne the better IMHO.

The amount of revenue that would be generated in the city for small business would be huge. No brainer…stadium cost $300mill now or $1bill in 5-10 years 🤦‍♂️🤷‍♂️

Michael Cerne even 500 million now and 500 when it’s completed in 10 years. Alternatively the Gov should start heavily investing in shitcoins in hopes they can afford it in 2045

To be fair, there are other bigger financial priorities for the ACT at present, like health and education.
With the current COVID, climate, it may be some time before capacity crowds return. Even then, how often does a Cbr crowd reach capacity??

Shaun Allen why would it be some time for crowds to return? Everywhere else in the world are pretty much back to normal life, many with much lower vaccination rates.

Shaun Allen capacity – not very often. The build it and they will come mantra is strong with some.

Grant Jones the return to capacity crowds has been much slower here.

Shaun Allen
Makes more sense than the Tram line.
With Action buses running at huge yearly losses & the current tram line never to recoup any of the infrastructure costs & now another billion plus on the next stage.
Why would you feel a new stadium would not be a sound future investment for Canberra?

ACT gov are spending billions on not much but can’t find some funds for a new stadium? What a shock…