Impressions at the Portrait Gallery 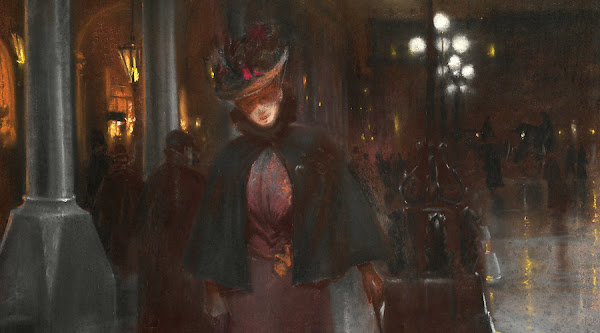 These are some of the questions invited by the portraits in Impressions: Painting light and life. Most of the works in the exhibition were made between 1885 and 1910. There are many by the outstanding portraitist of the period, Tom Roberts; the largest and most striking was made by the brilliant, short–lived Hugh Ramsay. In between fall paintings, drawings, prints and sculptures by Bertram Mackennal, Rupert Bunny, Charles Conder, Arthur Streeton, Emanuel Phillips Fox and George Lambert, made in and around Melbourne, London and Paris. The lives of all the artists represented in the exhibition intersected and crossed over as they attended classes, formed clubs and societies, exhibited and took painting trips together; as they made the eight-week sea voyages between Australia and Europe; as they sought the conviviality and sympathy of their compatriots abroad; and as they made portraits of each other.

Roger Mungummary - 4 hours ago
Hell no, nobody needs another fast food Macca's flogging greasy unhealthy garbage food View
Johnathan Davis for Brindabella - 6 hours ago
I hear you Andrew. Jobs are important. I worked in retail and hospitality when I was a teenager and I know how valuable I fou... View
Robert Knight - Canberra Progressives for Murrumbidgee - 7 hours ago
The thing that sticks out for me is the value to the community the tavern appears to be provide - i.e. a place where people c... View
News 6

viking princess - 11 hours ago
Very happy to say I can see myself and two of my children in that opening day photo. Congratulations on your success Manuel,... View
Nicholas Elizabeth Swain - 12 hours ago
Many of us travel across town for the cheese - even from south of the lake! View
Food & Wine 10

Philip Armour - 12 hours ago
Julie, you could volunteer and do the sorting so that this doesn’t happen, I’m sure you’d be just what Lifeline needs View
Opinion 10

Steve Ulrich - 12 hours ago
Christine Tancred just shows how stupid they are, and they clearly don’t know what they are doing when they vote every 3 ye... View
Community 3

Time is catching up with the Rocky Hill War Memorial’s searchlight in Goulburn. As it continues to show its age,...