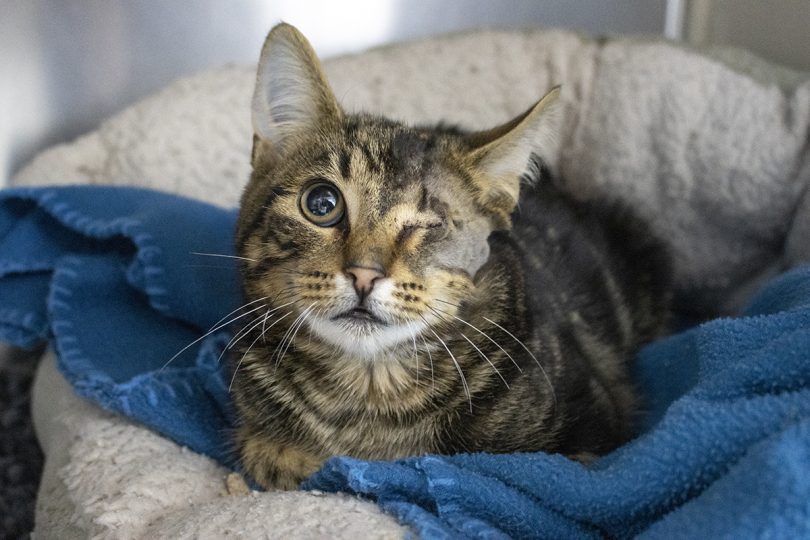 Fergus has recovered from multiple pellet wounds to his eye and body. Photo: RSPCA ACT.

A kitten that was found shot multiple times with air rifle pellets in southern Canberra last month has fully recovered and has been adopted.

Fergus was found near Kambah Golf Course in mid-May with several .177 calibre pellet injuries, including to his left eye and body.

He then underwent weeks of treatment and care from vets, nurses and animal care staff.

READ ALSO: Stats on cat attacks leads to containment in all Canberra suburbs

“His eye was really badly damaged and needed to be removed,” she said.

“We spend an enormous amount of time and put a lot of effort into nursing them [injured animals] back to physical health.” 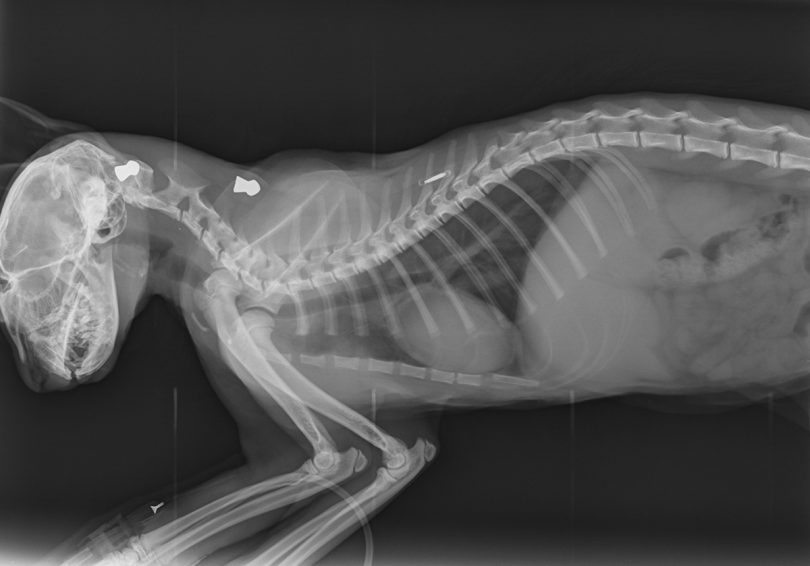 However, there is some good news for Fergus as he is now off to a new, loving home after being adopted on Tuesday, 15 June.

“We were fairly lucky with Fergus,” says Michelle.

“It’s been just over a month and now he has been adopted. It’s not always this quick.”

Sadly, the shooting was not an isolated incidence of animal cruelty that RSPCA ACT has seen. 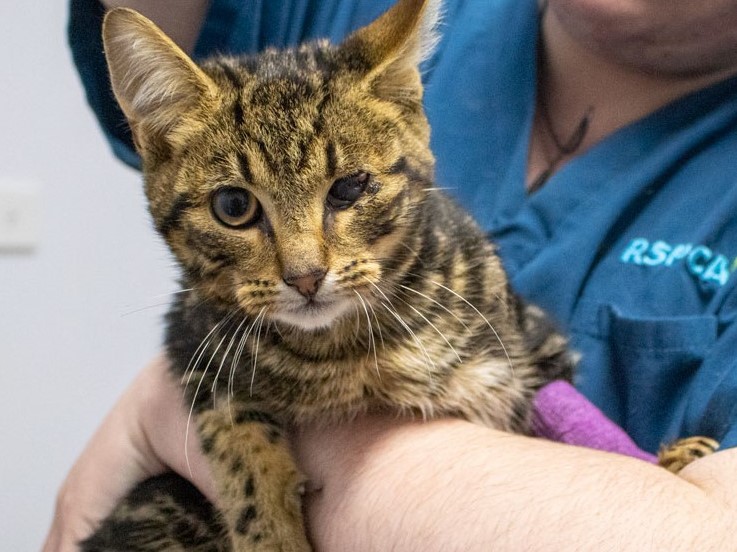 Fergus is just one of the many victims that regularly come through their doors.

“They all have their own stories,” says Michelle. “They all have experienced loss or abandonment, or in the case of Fergus and other animals, they were very cruelly treated.”

“Our staff put a lot of heart and soul into showing them that human hands can be loving.”

There was overwhelming help from the community when RSPCA ACT put out the call for any information regarding Fergus’s injuries. 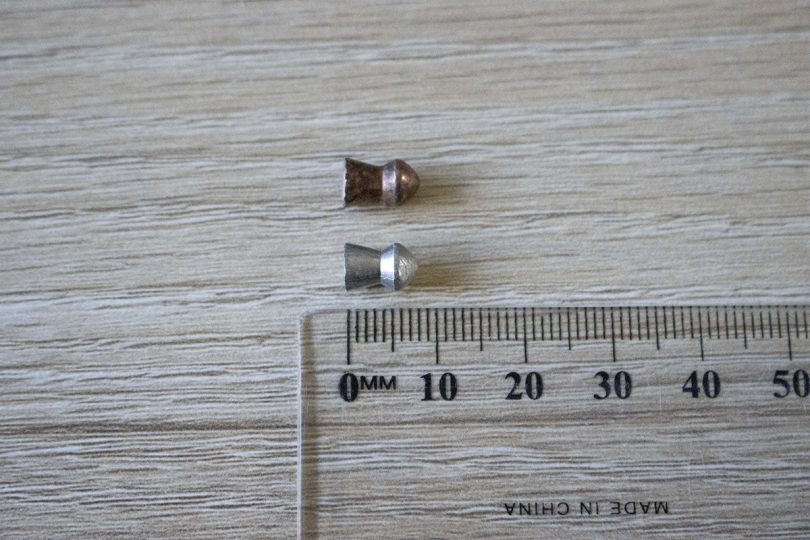 The RSPCA was overwhelmed by assistance from the public in finding who shot Fergus the kitten. Photo: RSPCA ACT.

“It’s always difficult when we see the ones that have been so badly mistreated,” says Michelle.

“All animals touch our hearts, but the ones that have been hurt, neglected and abandoned, they really pull on our heartstrings.”

Fergus has been renamed ‘Winky’ by his new family.

RSPCA ACT inspectors are continuing investigations into the attack.

Keeley Black its your namesake

Gods, there are some heartless people.

toadstool - 4 minutes ago
Why don't they put in speed bumps. That will force everyone to slow down to 40. View
Noel Benjamin - 52 minutes ago
Yvon Nemchinov And bogans are allowed to do what they want. We live in a society and not as entitled individuals, and those o... View
James Forge - 54 minutes ago
Jorge Gatica someone was killed by a hit/run driver about 15 years ago View
Community 110

Ruth Fearnside - 48 minutes ago
Such a good ending! Thank you for covering this story in the RiotAct. View
News 3

54-11 - 1 hour ago
This is a very poor location for a major regional hospital, and successive administrations have allowed ad hoc random develop... View
Food & Wine 26

Rob Tozer - 5 hours ago
They "patched some on Southern Cross Drive last week. Holes back again this week. West bound on Southern Cross from Coulter D... View
Meegan Ward - 6 hours ago
Pot holes are everywhere.with such a heavy downpour recently it's no wonder. From Gungahlin, Woden, Tuggers too.. View
Shannon Canavan - 7 hours ago
Mary Edmond the 🤬 potholes!!! View
News 3

Asefe Abedini - 5 hours ago
And what does "worthy" supposed to mean? Aren't the students all worthy of any kind of support because they made the effort a... View
Business 3

Richard Willcoxson - 6 hours ago
What’s the outlay on the batteries? View
Property 1

Acton - 6 hours ago
As a seller I would accept a reasonable offer and prefer to sell to a young local family, rather than to a cashed up overseas... View
News 12

Eddie Xia - 12 hours ago
Those trees are not that extremely danger at all. Otherwise it should be long gone when flooding and bushfires were there. View
What's On 6

Nada Krstin - 15 hours ago
Mark Maddock you didn't explain anything re my underlying questions, just quoted from the article - which as I said had alrea... View
show more show less
*Results are based on activity within last 7 days

A drug dealer found bloodied and beaten when hiding in a friend's cupboard will spend most of 2021 behind bars...
Breaking 5

A man from Sydney has become the second person arrested in 48 hours for alleged non-compliance with COVID-19 health orders....
Food & Wine 26

After nearly 50 years in its current space at the Belconnen Fresh Food Markets, the Ziggys Fresh store is closing...
Community 101

A Queanbeyan musician's online push to recover his valuable collection of rare guitars and family heirlooms has paid off, with...
*Results are based on activity within last 7 days

A Canberra homeless man has been left traumatised and unable to sleep after his dog was impounded by Domestic Animal...
Community 110

Canberra's wet winter continues to wreak havoc on the ACT's roads, with crews scrambling to keep up with the number...
Opinion 35

Missing your dogs while you’re at work? You might not be the only one

RSPCA’s Pets of the Week – Brodie, Mozzarella and Gouda

@The_RiotACT @The_RiotACT
Space Kitchen is at the bottom of a multi-storey car park, next to a construction site, tucked in the shadow of the Health Department - and it will send your tastebuds into orbit, as Michelle Rowe rediscovered https://t.co/fWaQHmHiIo (54 minutes ago)

@The_RiotACT @The_RiotACT
It's International Beer Day! So what's your favourite frothy, Canberra? Can't decide? Here are the local brewers' top tips so you can sip in style https://t.co/myenoEveP8 (2 hours ago)