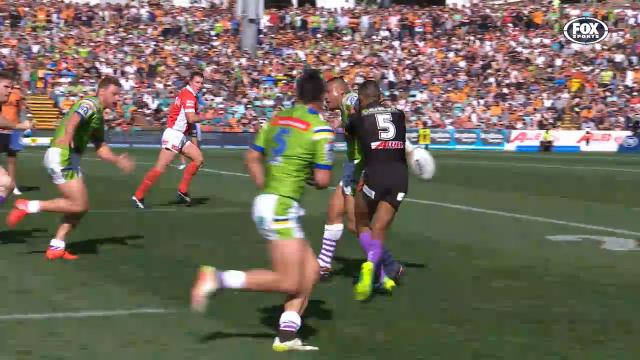 Fair weather fans inspired by perhaps one of the greatest rugby league passes of all time may struggle to get tickets for the Canberra Raiders’ home semi-final this Saturday with members having 24 hours to purchase up to 10 tickets each before general sales begin at 10am tomorrow.

The Raiders have scored a home final after defeating the Wests Tigers 52-10 in Leichhardt yesterday, with spectacular back flick pass from Joey Leilua that led to one of the Raiders’ tries becoming the best advertisement the NRL could have imagined for its finals series.

You can see the pass at the 53-second mark in this video report on the match:

The Raiders finished the competition in second place with their tenth win on the trot. They’ll play the Cronulla Sharks on Saturday at 5.35pm at GIO Stadium at Bruce.

The curtain raiser match between the NYC Raiders and the Roosters starts at 2.55pm.

Tickets are on sale to the general public via ticketek.com.au from 10am tomorrow, but pre-sales open today for ticketed members, at 10am, and at 4pm for non-ticketed members. All members can purchase up to 10 tickets, on a first come first served basis.

Surely the NRL can’t be serious about a potential 4-week suspension for Jack Wighton over that hit on Joel Edwards? Talk about double standards. The NRL match review committee is a complete farce.

Just terrific what the Raiders have done this year, their “no d#$khead” policy is paying dividends. This is the first time in Raiders history a side has won ten in a row. This team has also scored more regular season points than any other Raiders side and they are the first Raiders side to finish second since 1995

Andrea Mya Riboust - 28 minutes ago
Matt the former I assure you 😄 View
The Martini Whisperer - 2 hours ago
Lucky they’re weren’t in Texas. View
HiddenDragon - 5 hours ago
So the Big Merino will be the command HQ for Gilead Down Under - and they said it couldn't happen here......... View
Food & Wine 12

Over 200 parking tickets issued at GIO Stadium during Raiders match