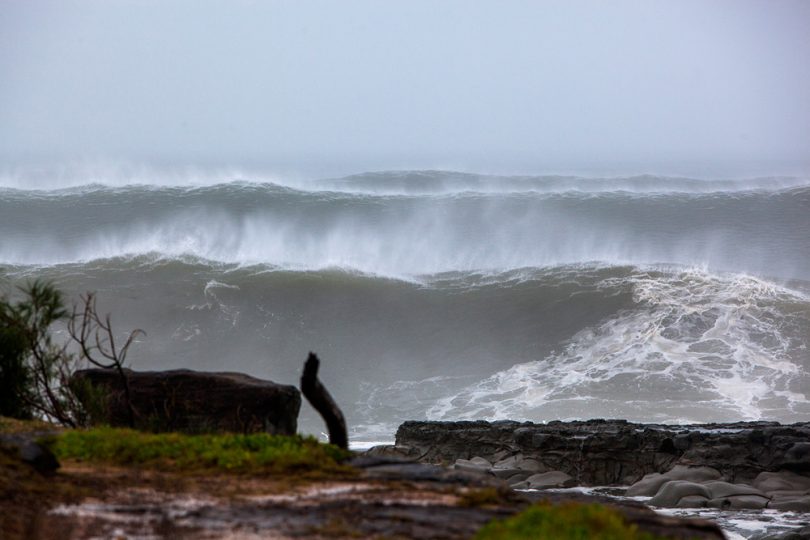 SLSNSW is warning it will be a dangerous weekend on coastal waters everywhere north of Ulladulla. Photo by Matt Brockie (supplied by SLSNSW).

South coast beachgoers are being warned to exercise caution this weekend as strong winds and dangerous surf combine to create potentially hazardous conditions.

Surf Life Saving NSW said it will be a dangerous weekend on coastal waters everywhere north of Ulladulla and is cautioning people to be “vigilant and safe”.

Although it is the NSW North Coast and Far North Coast beaches which will feel the brunt of Tropical Cyclone Oma, the south coast will be affected by a separate system with a strong series of wind pulses in the south Tasman Sea.

“These are expected to bring solid southeast swell to the coast on Saturday afternoon, Sunday and into next week,” warned SLSNSW.

A spokesperson for SLSNSW said that south coast beach conditions will be particularly bad on Saturday when big waves will combine with strong winds.

She said that waves are expected to be between three and six feet high, with winds of 20-30 knots.

The spokesperson said that some southern protected corners may be okay for beachgoers but people will need to be cautious at any of the beaches facing south.

SLSNSW has provided the following safety tips to follow during hazardous surf conditions:

Michael Strand - 3 minutes ago
Margy Duke I should add, you are clearly the person these proposed laws are aimed at.... View
James Hutchison - 7 minutes ago
Allan Pryor yep! Canberra is probably one of the best cities for bike paths and we still have this issue. The bike riders don... View
Allan Pryor - 15 minutes ago
James Hutchison that a lotvof infrastructure for people who wont use it View
Lifestyle 14

Valerie Foster - 16 minutes ago
Been talking about that for years. View
Property 8

Inca Serrated - 26 minutes ago
Not a single mention of the conditions that prisoners are living in... Lockdowns, no family contact for over a year, no meani... View
Lori J Tas - 2 hours ago
Kriso Hadskini there are currently rules around how much the govt can enforce people to pay back week to week, sadly, given h... View
Kriso Hadskini - 4 hours ago
Make the inmates pay the bills they cause, it is not rocket science.... View
Community 35

Mark Heinrich - 39 minutes ago
These things are not either or. There’s a need for multiple solutions to multiple problems. Don’t knock something just be... View
Cameron Murtagh - 1 hour ago
Abbey Snell https://domesticviolence.org/domestic-violence-against-men/ View
Cameron Murtagh - 1 hour ago
Something wrong with public housing for men too? View
News 11

@The_RiotACT @The_RiotACT
Around 250 people enjoyed a strip and dip in freezing temperatures this morning for @Lifeline_ACT's fifth Winter Solstice Nude Charity Swim! Were you there? https://t.co/8AcpLjpUyp (22 minutes ago)

@The_RiotACT @The_RiotACT
An unnamed Canberra lottery player has kicked off the working week more than $1.4 million richer after checking their division one winning Saturday Lotto ticket https://t.co/JhfawW9X7M (56 minutes ago)

@The_RiotACT @The_RiotACT
The ACT is closer to implementing a positive consent model, whereby a person must actively communicate consent rather than it being presumed because the person did not say no https://t.co/XXXPHxbQTa (1 hour ago)