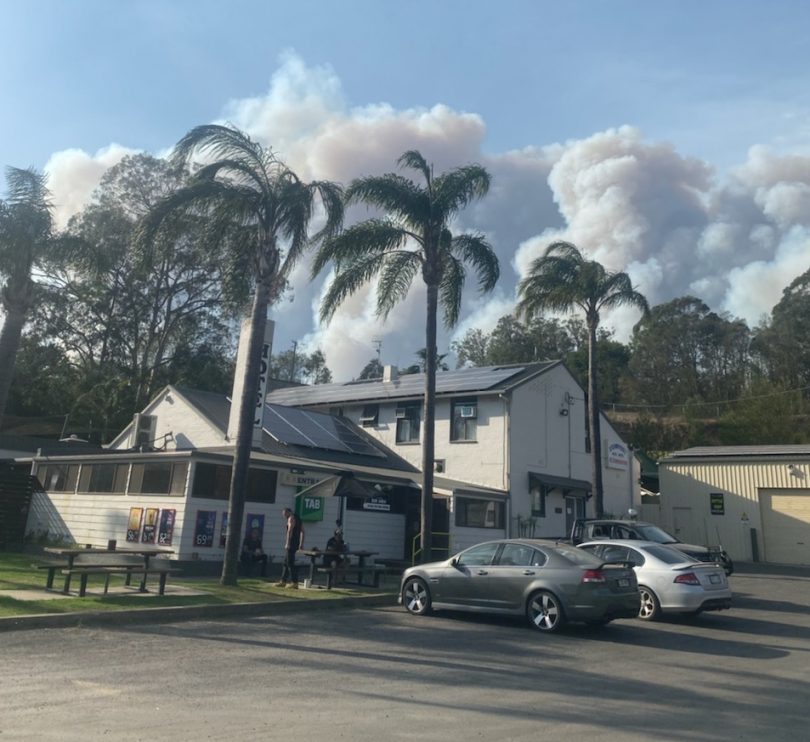 The Steampacket Hotel at Nelligen is a welcoming sight for motorists coming down the Clyde Mountain. Photo: Supplied.

Traffic streaming down the Kings Highway to Batemans Bay this weekend will notice one landmark is missing: the welcoming lights of Nelligen’s Steampacket Hotel.

After a turbulent 12 months, the Alvey family has made the tough decision to close the doors of the iconic pub as they work to repair damage wrought by storms and flood.

Little did they know they would be tested – first by fire, plus a pandemic, hail and flooding rain.

“It’s a couple of years we don’t want to go through again,” says Joel. “We are exhausted, but we are just trying to stay as positive as we can.” 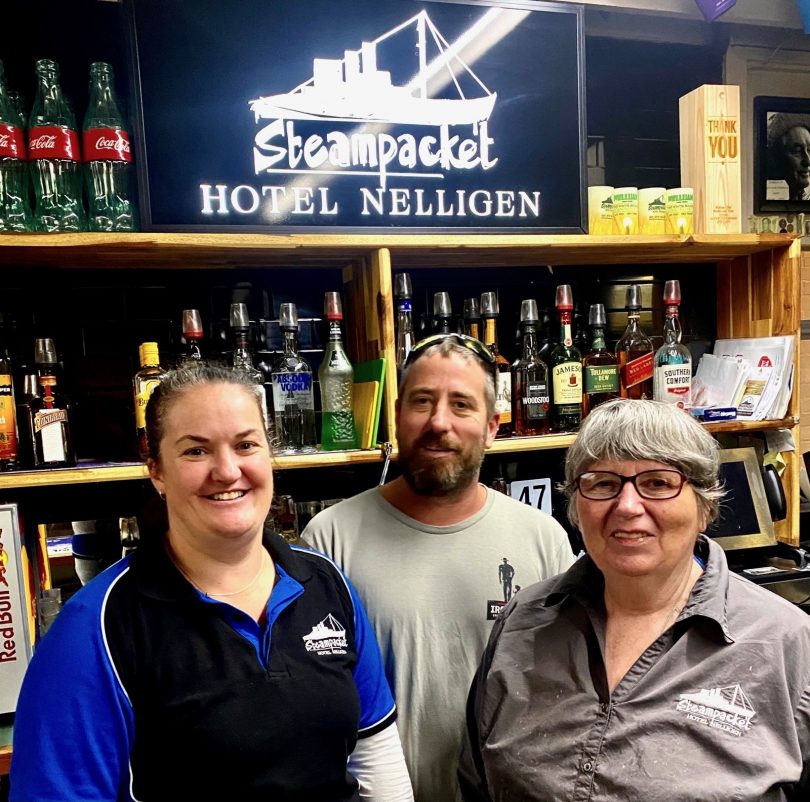 The Steampacket Hotel is no stranger to adversity. First built on a riverfront site in 1866, it was the watering hole for a fledgling village of just 150 people.

In 1900, then owner of the Steampacket Hotel, Michael White, demolished the old building and built a new structure on the same site with a floor more than a metre higher than its predecessor.

The pub was better able to withstand floods, but it burnt to the ground 25 years later.

The business had better luck on a new site just off the Kings Highway and has been a welcome sight for travellers ever since.

READ ALSO: Your right to vote as a non-resident ratepayer

Joel estimates about 40 per cent of the Steampacket Hotel’s trade comes via the Kings Highway, with locals and caravan park patrons making up the rest.

Times were tough when the Kings Highway was repeatedly closed due to bushfires in late 2019, and the tiny village fought off the flames time and time again for almost three months.

“We stayed here and protected the pub,” recalls Joel. “We had sprinklers on it and water tankers in the carpark.”

When the danger finally passed, the Alveys reopened for business – only to have the caravan park flooded out and the highway closed by a landslip.

“We were open for a couple of weeks and then we were shut down for COVID-19,” says Joel. “We reopened in the middle of July and started off slow, but it was definitely building and things were looking pretty good.

“Then we copped a freak hail storm on Boxing Day night. We had to evacuate the pub; there was water coming out of powerpoints and lights. We were running around with mops and buckets, but it was just too much.” 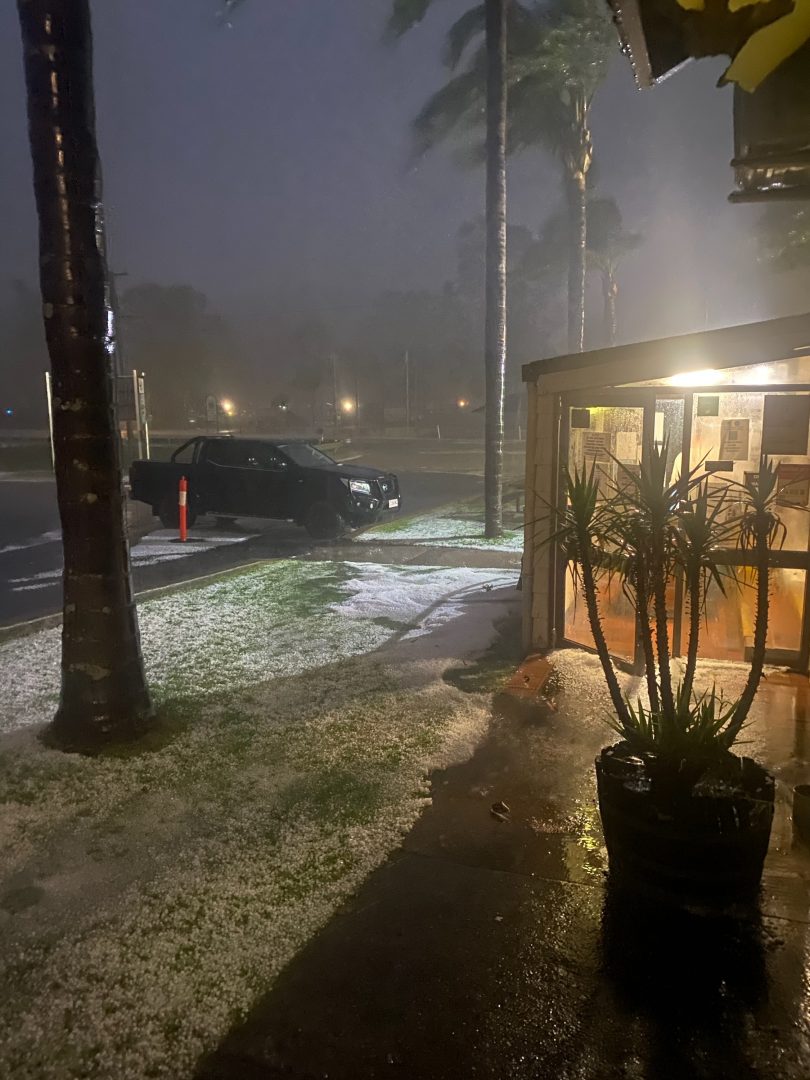 The Steampacket Hotel at Nelligen after the hail storm on Boxing Day 2020. Photo: Supplied.

Faced with a leaking roof and flooding in what should have been the peak period for the hotel, the Alveys decided to close the doors and work on repairs.

“We are getting it fixed, top to bottom,” says Joel. “We need to replace the whole roof, all of the iron, and all the ceilings inside. We need some new carpet. The assessors from the insurance company are coming out this week. They’ve been really good, but we don’t know when we are going to reopen.

“We are hoping to put something on then to let people know we are still here and that we are not going anywhere.”

That news will be a relief to the many residents and visitors who use the Steampacket as a trade and social hub, conducting their business in the front bar.

“It’s the main hub where people meet up,” says Joel. “It’s important to the town. They only thing we can do is look forward and keep going as best we can.”

It's been closed for a few weeks now. I travel to Dalmeny for work every week from Canberra. Thought it was odd.

Tooheys for you bullet.

May I suggest a sage or cleansing of the vibe energy too. What ever you believe in can work, including sage the area especially the house part at the front of the pic . I don’t know this building not been there before but it popped up on my page and I can see it needs energy clearing, healing . 🌸

That’s what makes u fat

Brian Wilson was fat before l started drinking that mate.

It would be nice to have Great Northen back on tap as well.

great place to eat, will definitely be there again when it reopens

Mile doesn’t remember he only had 1 eye open.

We have to set up another trip sometime fellas 👌

Mile, it’s not looking good bro, lots of places have introduced a 1 metre 20 height limit to get on the boat. Spewing. Ask Klimi.

Yeah Mile no squidgets allowed, shirts are not optional anymore