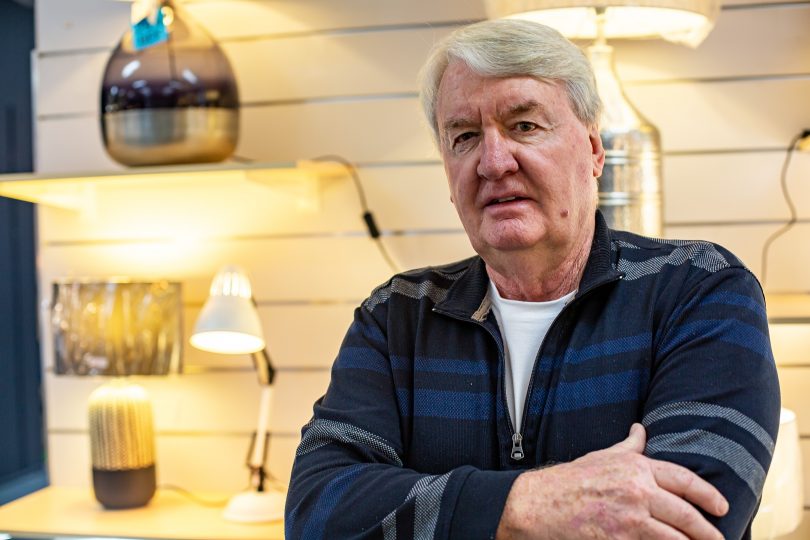 When Dennis Barnes flicks the switch for the last time at Fyshwick’s Southside Lighting at the end of the month, it will mean the end of a Canberra institution and one of the capital’s great business stories.

“I’ve done my 44 and a half years apprenticeship so I figure it’s time to bail out,” the 72-year-old former sparky says.

Southside Lighting has stood at the corner of Canberra Avenue and Lithgow Street for 36 years, after Dennis moved across from Southlands, where he had ‘stuck his neck out’ to buy Cochrane’s Electrical in 1975 when he was 28.

His customers’ response to news of the closure has been touching, says Dennis, with many in disbelief that such an iconic business is about to shut its doors.

But without a family member to carry on or a buyer willing to take it over, Dennis has decided to wind the business down and retire.

He says it is very hard to find someone to take on such a business these days, and the lighting game has been a victim of its own success with the progression from the incandescent globe to long-life LED technology.

“The overheads these days, the LED story is a good one for customers because everything is lasting a lot longer and everything is getting cheaper all the time, and with the rates you pay in this town, you just couldn’t make it pay,” he says. 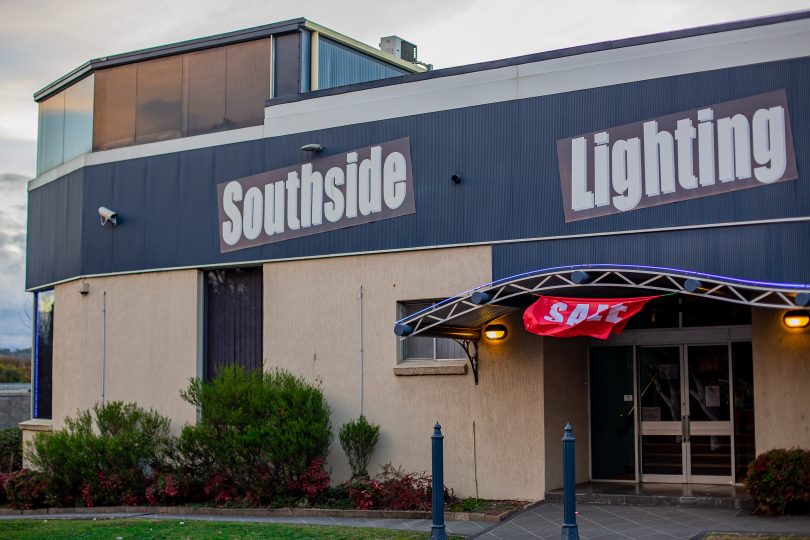 Dennis says there is always room for a specialist store in Canberra’s market.

Throw in online sales and the ‘nuisance value’ of the big box stores and it all adds up, although Dennis says there is always room for a specialist store that provides choice and service.

In the last 10 to 15 years there had been a big upsurge in demand for decorative lighting, but more recently the trend was for simpler styles, with people opting for recess lights everywhere.

The Southside Lighting site was one of the first five commercial leases in Fyshwick, beginning life in 1955 as the Capital Cordial soft drink factory.

Dennis says Schweppes bought them out and added the two-storey front offices before making way for Mark Bryce Crash Repairs.

When he and his wife took over in 1983 there were still car wrecks strewn around the site and the roof was full of ‘bog dust’ from where the panel beaters had been working on the cars. One of the legacy’s of the soft drink factory was the floor’s 100mm incline so the water could drain away.

Dennis had come across from Adelaide in 1968 to wire up the hundreds of guvvies being built to house the influx of public servants coming from across the nation to take up positions in Canberra.

“At that point Canberra was growing at 12 per cent per annum, it was mindboggling stuff – we were putting up suburbs every few months,” he says.

The business has been a great journey over the years and his staff have been like an extended family. At the peak there were 18 to 20 employees, with 10 working on a Saturday morning.

Now there are just three left as the closing down sale endeavours to clear stock and heads to its conclusion at the end of the month. 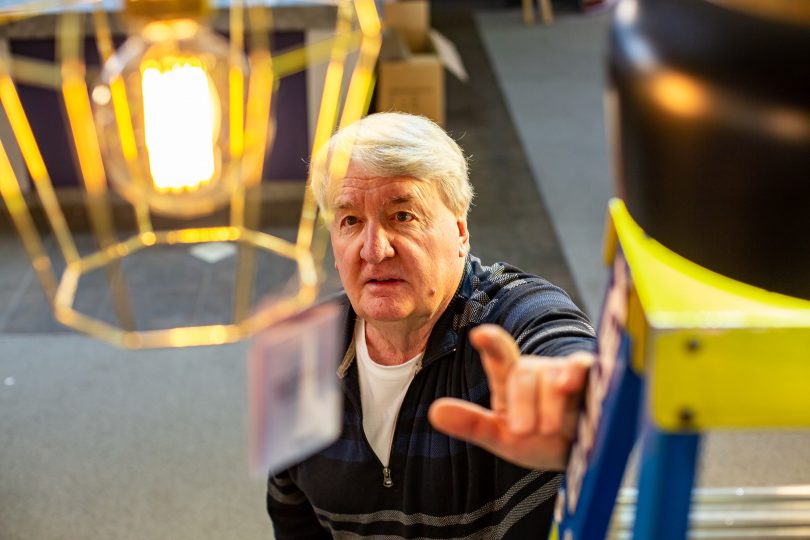 Lights out for the iconic local business.

Then it will be time to offload the prime site, or the ‘super’ as Dennis calls it.

Until then, there are still plenty of bargains to be had at what has been a beacon for Canberra homemakers for so many years.

WoW Dennis, that’s an amazing journey! Enjoy your retirement if I had have been older I would have taken over Cochrane’s Electrical however you have done the city of Canberra an amazing service over the years

This was my Dads business Cochrane’s electrical. Sold after his passing in 1975 I’m sure he’d be both proud and sad to see it close. We had many childhood memories in the shop in Southlands Mawson.

Will be sadly missed. Where on earth will I get my tiffany lamps now? 🤔

What an iconic Fyshwick enterprise. I’ve shopped at Southside for most of those years. Helpful and knowledgable staff and always quality product. Enjoy retirement.

Very sad. Such a great business will be missed in the community

Well done Dennis, will see you in the coming weeks.

They must have fittings in just about every house in Canberra.

I just loved a lot of the unconventional styles of lighting they sold here. I've bought a few smaller chandeliers for customers from Southside over the years. Not sure who's going to replace their niche although Beacon come close and project lighting have a few interesting lighting products.

Dennis and his team have provided the entire lighting for the two homes we have built in Canberra. A great Canberra business with local knowledge and great service. Your independent family business model will be missed in Canberra. Enjoy your retirement, I'm sure you will find many bright spots along your travels ☺☺☺

Rosalind Turner - 4 minutes ago
Shawn Mulgrue just hope your dept doesn't have to move. My fed govt work area is moving and the new dept of Treasury rules on... View
Vander Leal - 5 hours ago
You had spread city centres with departments and buildings, but that was way too boring, so you ask to put down the old build... View
Andrea Mya Riboust - 10 hours ago
Material for a Utopia episode 😄 View
News 41

Steve Brinkman - 2 hours ago
Margaret Freemantle she cant View
Jennifer Fraser-Brown - 13 hours ago
Yep try the Pfizer one - the rate of anaphylaxis caused by the Pfizer vaccine is higher than the rate of thrombocytopenia fro... View
News 30

Peter Robinson - 8 hours ago
Steve Jones copy that. Love the motion lotion guzzling V8 . Just for the sound you know ..... View
Luc Stofmeel - 8 hours ago
The article forgot the best option, an actual scooter! $300 a year to register, free parking everywhere, runs on the smell of... View
Acton - 9 hours ago
If these financial advisors calculate the running costs of a car for an 'average' Canberran as $16,000 a year then I would be... View
Food & Wine 44

Waste proposal a planning debacle that will ruin Fyshwick

@The_RiotACT @The_RiotACT
Keeping a restaurant running for 20 years is a massive achievement, but three generations have achieved just that at Mama’s Trattoria https://t.co/F5vcV1trrc (11 hours ago)