A 66-year-old has been arrested after allegedly selling cannabis to a child at Kippax Shopping Centre. Photo: File.

A man has been charged with drug trafficking after allegedly selling cannabis to a 13-year-old child in a Canberra mall.

ACT Police said around 2:40 pm on Monday (29 March), police saw a man interacting with a group of young people at Kippax Shopping Centre in Holt.

Police arrested the man, saying the 66-year-old from Holt had allegedly sold cannabis to one of the children.

“The incident follows a number of information reports to police regarding anti-social behaviour in the area,” ACT Police said.

The officer in charge of Belconnen Police Station, Inspector Brett Booth, thanked the members of the public who reported the incident.

“It is your community, you know when something is out of place in your neighbourhood and I would encourage all Canberrans to report suspicious activity to Crime Stoppers,” he said.

The man will appear in court on 28 April charged with trafficking cannabis. 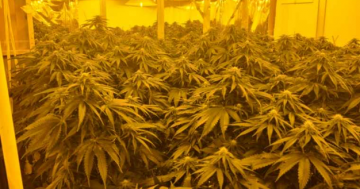