Let us take your development
to the next level.
8 April 2020

Canberra experienced the second largest increase in property listings in the nation in March, and asking prices for houses continued to rise, despite the economic impacts of the COVID-19 emergency beginning to be felt.

SQM Research’s monthly report said the number of properties listed for sale in Canberra rose 11 per cent last month, second only to Darwin.

But numbers were still down on the same period last year when there were 4,928 properties on the market.

The big change was that the number of properties listed for 30 to 60 days more than doubled from February’s figure of 244. This was part of a national pattern (up 74 per cent), which SQM said suggested a drop in sales activity for the month.

But Principal of Inner North & City Sales at Independent Graham O’Brien says he has been surprised at the level of inquiry and activity in the Canberra market.

He said reaction had been mixed but Canberra, with its strong public sector employment base and associated businesses, had a stability not seen in other cities in Australia. 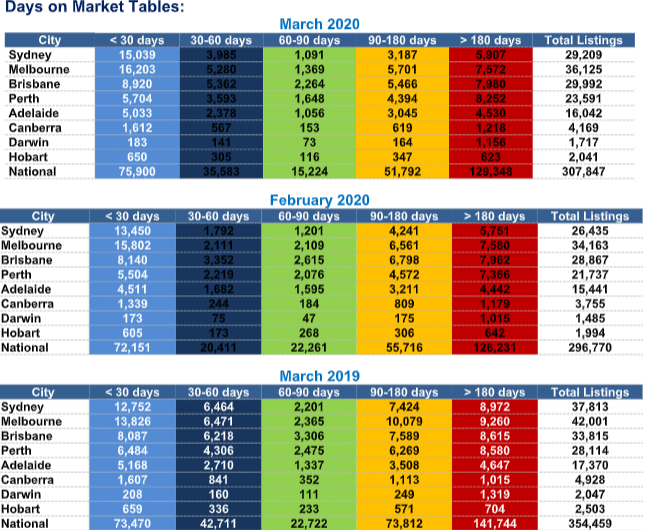 The industry has had to adapt to restrictions, including no open homes and auctions, but houses were still selling in a couple of weeks, with Independent using set prices and private treaty to ”make it easier for buyers”.

”If we list the property then they are definitely being sold if the owners are realistic in the current environment,” he said.

But talk of a 20 per cent fall in prices could not be applied to Canberra.

Mr O’Brien expects to see fewer properties come on to the market but also more investors due to the ongoing volatility in the sharemarket.

Year-on-year listings show declines for all capital cities, particularly Sydney (down 22.8 per cent) and Hobart (18.5 per cent).

Managing Director of SQM Research Louis Christopher said residential property listings were starting to increase and accumulate, noting the surge of stock on the market between 30 and 60 days.

”This may reflect the start of a capital city housing market downturn due to the health and economic impact of COVID-19,” he said. 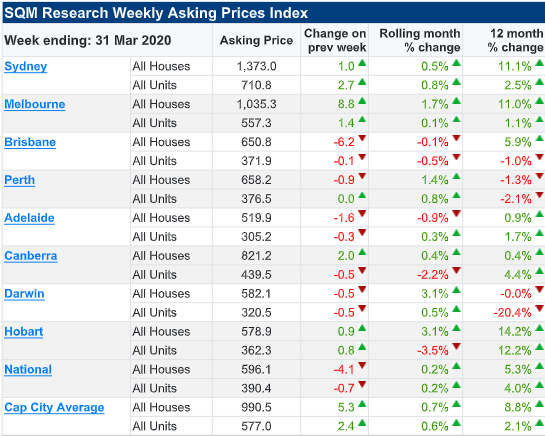 The demand for freestanding houses in Canberra continues unabated, forcing asking prices for the month higher by 0.4 per cent, the same figure for the year.

The price of Canberra units continues to fall with buyers spoilt for choice, although over the 12 months they remain up. They were down 2.2 per cent for the month but up a healthy 4.4 per cent for the year, with an average asking price of $439,500.

Mr Christopher said the rise in asking prices meant some vendors had not adjusted their pricing expectations yet.

SQM said that compared to a year ago, the capital city asking prices posted increases of 8.8 per cent for houses and 2.1 per cent increase for units.

Over the month, Darwin and Hobart recorded the highest increases for houses of 3.1 per cent, while the highest price increase in units was in Sydney and Perth with an 0.8 per cent increase.

Brisbane was the only capital city to record decreases in both house and unit prices – 0.1 per cent for houses and 0.5 per cent for units.

Over a year later and the so called bubble is now huge. Should have bought a place when this story come out, would have made an easy 20% profit by now lol

What’s happening here is exactly what you expect if the market is going to crash. Everyone is rushing to sell their property before prices fall.

It’s too early to predict Exactly how much they will fall, but implying properties in Canberra won’t fall in price after only a couple of weeks of pandemic effect is not believable.

Once again, no Saturday auction clearance rates in the Sunday Canberra Times today.

Is that because very little is being sold?

Great to hear things are good in The Capitol. Strong real estate market, busy shopping centres. It’s a bit different out in the districts though.

Surely this bubble will burst sooner rather than later?

I would take this as evidence that it’s not a bubble.