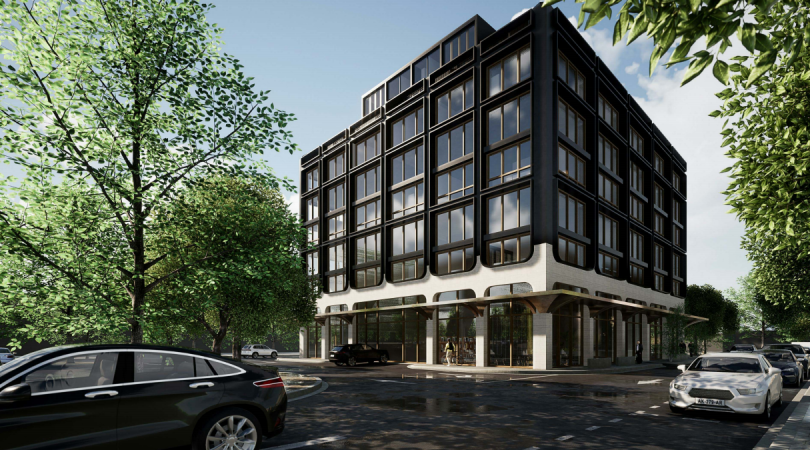 An artist’s impression of the proposed development. Image: Cox Architecture.

A milestone mixed-use residential development has been proposed for the commercial area of Phillip, potentially paving the way for a regeneration of the precinct.

Dubbed the Lord Phillip, the five-storey, Cox Architecture-designed project on Botany Street and Divine Court is the first outing for former Geocon executive Peter Micalos’s Intellectual Property Group, and is at the pre-development application stage.

The group says the project represents an important milestone for Phillip as the first urban renewal project in the precinct since the ACT Government finalised its Master Plan for the area.

An indication of its vision for the area can be gained from a social media post calling Phillip the ‘Braddon of the south’.

The site, Block 1 Section 42, has car yards on both sides and neighbouring businesses on Botany Street include a laundromat, cafe and cake shop. Nearby is the old Magnet Mart hardware site, which is now a restaurant, and the rear of shops next door to that. Across the road are car servicing and repair shops.

Two levels of basement parking accessed by a car hoist will provide 56 spaces including four for people with a disability. Five spaces are provided in groundfloor garages for commercial tenants.

Levels one to three have winter gardens or glassed areas, while at the attic level there are rooftop gardens. 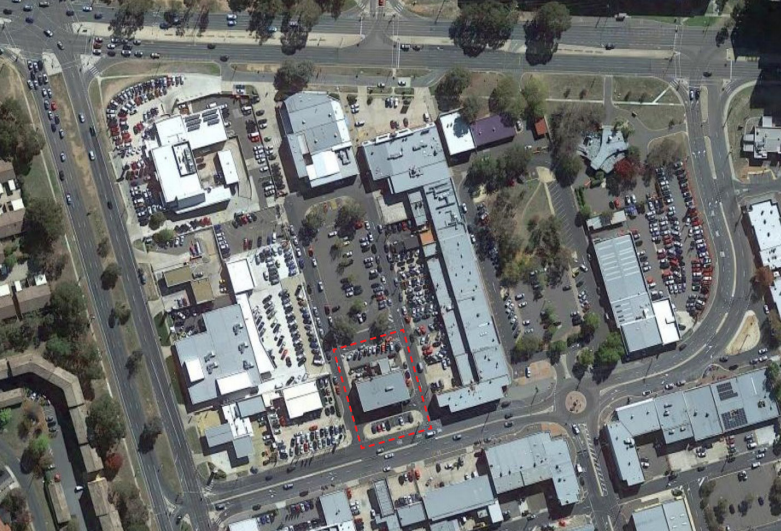 The Phillip site is surrounded by business in the suburb’s commercial area. Image: Google.

It is intended that they operate under a unit title with all these uses permitted, and individual unit layouts customised to occupants’ requirements.

The plans show a ground floor awning to protect pedestrians, and trees and street furniture around the building.

A shared zone is planned at the front of the building, including a covered outdoor dining area.

Inside the building is a residential lobby and concierge.

The existing two-storey commercial building will need to be demolished, as will a rear fence, and verges and crossings modified.

The project is open to public consultation until the end of the month.

Mr Micalos spent 15 years in the property industry before founding his own boutique development business, and this month announced a partnership with national real estate network The Agency, which is looking to expand into the resilient and stable Canberra market.

Mr Micalos has a project pipeline estimated to grow to 2,000 units over 24 months and a total value of $1 billion, according to Property Observer.

Ryan - they are gonna bulldoze Mings..

Wonder how Julian Valtas feels about this

chain ourselves to it maybe?

In 2003, I was the author of several papers by the Woden Valley Community Council for the WTC master plan, including residential housing options within the WTC (including Phillip trades area). At community presentations and meetings, there was strong support for additional housing in the WTC, including the re-purposing of older buildings. At the time, the old Guardian House was slated for demolition, despite strenuous support from the WVCC for it’s reuse. It was demolished but as events showed, the WVCC’s arguments and support helped saved other buildings.

There were several drivers for the WVCC’s approach, including the indiscriminate and unsympathetic dual occupancy/multi-use developments occurring in surrounding suburbs. It was felt that concentrating new housing in the WTC was the far better option.

The major concern was existing land use conflicts. At the time, Civic was undergoing significant gentrification, and the WVCC could see the writing on the wall for live music venues.

Separately to the WTC master plan, community groups in Woden were pushing for legislative and/or regulatory protection for existing lease-holders. Then planning minister Simon Corbell was completely dismissive, as have been successive Labor governments. With respect to the Phillip trades area, these protections are absolutely essential before any redevelopment takes place.

Unfortunately, we are seeing now exactly what we have seen all over Canberra – ad hoc, dislocated, opportunistic developments that are not integrated into any coherent plan. Until there are some over-arching controls and guidance, we’ll just see yet another mish-mash of incoherent changes that will create a dogs breakfast in this area.

If only we had a planning minister and planning authority that would listen to the community, set up some proper regulations and controls, and oversee an integrated and holistic redevelopment of an important part of this city’s character. Don’t hold your breath…

Where is the vibrancy?

“Two levels of basement parking accessed by a car hoist will provide 56 spaces”.

Having to wait for the car lift to get in and out of the carpark might be a hassle in the morning.

I do smile at the artists impression with all of the trees lining the street, cause there ain’t too many at the moment.

Good point. I had to laugh at the artists impression for a Tuggeranong block of units that looked like a fancy 5th Avenue development bordering the amazing trees of Central Park.

The building when built in reality looked like a pop up development to quickly house disaffected families following an earthquake.

They are like the Product versus Packshot they used to feature on ABC’s The Checkout.

This development is inappropriate for the area which is the light industrial area servicing Woden residents. If this goes ahead it will start a precedent which will see the caryards and mechanics pushed out. There is already no hardware or gardening centre in Woden since Magnet Mart/Home closed down. Will we also have to drive to Fyshwick to get our cars serviced in future?

Adam Burzynski I called it in 2013 hehe

"Braddon of the south" . So the light industry and commercial businesses will eventually be pushed out by apartments, just as most of the sporting facilities in northern Phillip have already been pushed out for apartments.

This would not be a good outcome for the community.

And 5 minutes later the residents will all start complaining of the noise etc. Some areas should remain commercial, not every part of Canberra needs high density residential.

A great area - great building and a great developer.

Rob Thomas - 3 hours ago
Kir not only that I have my own oxygen tank and mask. I've be arguing for a further discount as I'm not using the buildings a... View
Kir Rin - 3 hours ago
Rob Thomas do you potentially pay for other things that others may not? Do you have a separate entry? View
HiddenDragon - 4 hours ago
Another great thing about electric vehicles is that they're exempt from those old-fashioned rules about parking between the y... View
News 21

Pat Murray - 6 hours ago
Outta my Weyman! View
James Guy - 7 hours ago
Great photo View
Catherine Hulse - 8 hours ago
Good on you mate! You did for our town! View
Opinion 48

@The_RiotACT @The_RiotACT
After a huge week in ACT politics, our newsletter wraps up the topics that had readers talking https://t.co/bozjQLVeve (45 minutes ago)