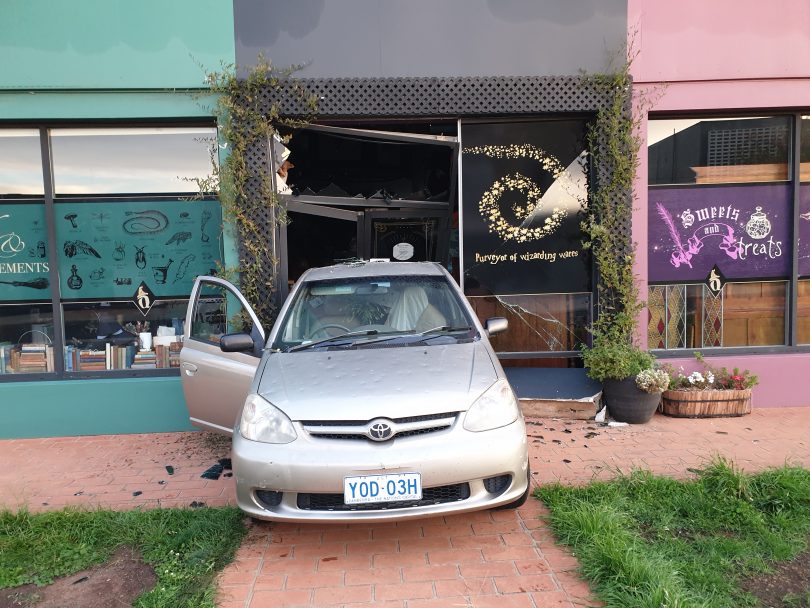 One ram raid vehicle lodged in the doors of Quizzic Alley in Fyshwick. Photo: Michael Milton.

A series of ram raids over the past 24 hours in Garran, Hughes and Fyshwick is being investigated by ACT police, who say their focus on commercial property crime is growing as many businesses are locked down by COVID-19.

The four incidents occurred in the early hours of this morning, between 5:00 am and 6.10 am.

At about 5.10 am, police say they responded to reports that a business at the Garran Shops was being rammed by a vehicle. The premises were damaged and an amount of property was stolen.

A report followed just 10 minutes later at 5.20 am that a business at the Hughes shops was also being rammed by a vehicle. When police responded, they found that the premises had sustained damage and that an amount of property was stolen.

Then, about 6.10 am, police responded to reports of further aggravated burglaries at businesses in Fyshwick. Two of thee took place on Pirie Street, and one on Isa Street. A vehicle appears to have been used to gain access to the two businesses on Pirie Street but police say that is unclear at this stage what was stolen during these incidents.

Police believe the incidents are linked and investigations are underway.

One of the Fyshwick shops is the Harry Potter-themed QuizzicAlley, belonging to Canberra Paralympian Michael Milton.

“They got their car stuck in the doorway and didn’t actually enter the shop,” he told Region Media. “We are here at the moment with someone kindly doing temporary door work and framing. It’s not the end of the world, but not what you want, you feel like people are kicking you when you are already down.

“We’ve received many offers of support, but you do get shaken to your core a bit”, he said.

The shop currently has limited opening hours and is operating online. To alleviate lockdown fever, they’re also live streaming free Harry Potter trivia nights on Wednesdays at 6:00 pm and 7.30 pm depending on skill levels. Mr Milton joked on Facebook that perhaps the would-be thieves should have simply used the Alohomora unlocking spell. 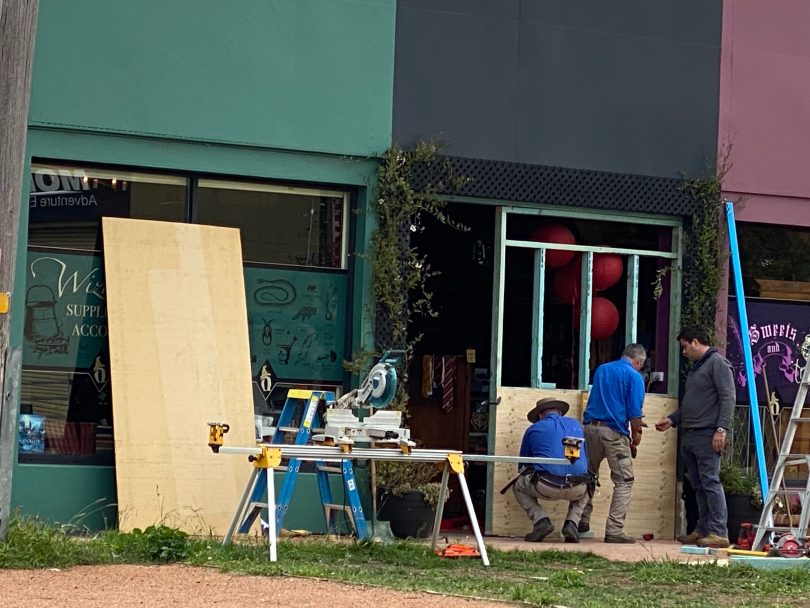 Anyone who may have seen anyone acting suspicious in these locations, or who has dash-cam or CCTV footage of these areas around the time of the incidents is urged to contact Crime Stoppers on 1800 333 000, or via the Crime Stoppers ACT website. Information can be provided anonymously.

ACT Policing told media this week that while household burglaries have decreased noticeably during the COVID-19 lockdown, they are alert to the possibility that commercial burglaries may increase as businesses close their doors. Canberra’s burglary figures overall are down on the same period of time last year, but police say they’re doubling down on crime prevention work.

Police say that as foot patrols decrease because entertainment venues are closed, they are sending out more vehicle patrols and are also enforcing the COVID-19 restrictions on social gatherings.

Unlike our neighbours in NSW, the ACT approach to COVID-19 social distancing breaches has been based on education and awareness as the Canberra community has generally been co-operative with the restrictions.

In addition to the dedicated Crimestoppers number for criminal behaviour reports, Access Canberra now has a dedicated hotline which runs from 8:00 am to 8:00 pm, to report breaches of the health restrictions. The number is 02 6207 7244.

But unlike Crimestoppers, your call will be digitally traceable and you’ll be required to provide a significant amount of personal information including your name and address before your report is logged, similar to the information required when police reports are made in person.

Similar hotlines in other jurisdictions have been deluged with calls, but ACT Policing says the Access Canberra number is not designed to be a Crimestoppers model. People will need to back up their reports with details and police are looking for what they describe as “egregious breaches” potentially including large gatherings or people breaking quarantine.

One Response to UPDATED: Harry Potter shop among the targets of ram raid spree across the ACT
Filter
Showing only Website comments

Canberra also seems to be the ram raid capital of Australia. I would suggest street-based CCTV to monitor vehicles and occupants at the entrances to Fyshwick and other suburban industrial areas, group centres and shops.

phydeaux - 42 minutes ago
"Penalising “poorer” [sic] people less, is an incentive for them, and a serious grievance to others" So sorry to hear tha... View
kenbehrens - 45 minutes ago
Difficult question. I've often thought that fines are inequitable with those on higher incomes not adversely impacted. Yet th... View
domenic - 3 hours ago
Penalising people differently based on their ability to either do well for themselves or not is a socialist ideology that I d... View
News 4

@the_riotact @The_RiotACT
ACT Senior Australian of the Year and 50-year volunteer with @stjohnaustralia Valmai Dempsey wants mandatory #first-aid training for learner #drivers. She says it's a no-brainer https://t.co/Xovhw0Ec3H (11 minutes ago)